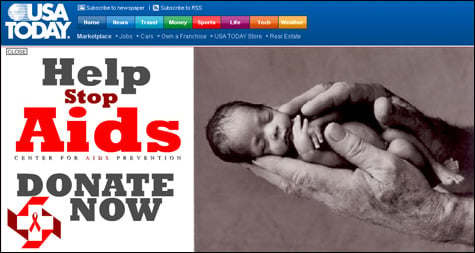 It turns out the New York Times isn't the only major paper selling its Web space to the Center for AIDS Prevention, a sketchy charity that we at ProPublica dug into earlier this week. USA Today is also running the ads -- right across the top of the front page on their Web site.

The center disseminates incorrect information about HIV prevention, and the center's proprietor is connected to a now-defunct herbal remedy company that offered an ineffective AIDS treatment. There is also no evidence the center has ever engaged in any charitable activities, despite the claim that it's been fighting AIDS for more than 20 years. Here's our original story.

As of late Tuesday afternoon, both the Times and USA Today were still running ads for the center.

The Times told us it wouldn't take the ad down because it considers the charity "legitimate" -- in the sense that the IRS recognizes it as a charitable 501(c)3 organization. "We do not read a book in order to accept advertising for it," a spokeswoman said by e-mail.

Spokeswomen for Gannett, USA Today's parent company, did not reply to phone messages left Thursday morning. We also called the paper's advertising department, but nobody has gotten back to us yet.

The Times has been running the center's tiny banner ad for over week. We learned about USA Today's bigger version when the Raw Story, a news Web site, brought it to our attention this morning.