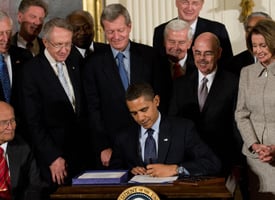 Last week we noted that Obama broke a transparency-related promise when he signed the Lily Ledbetter Fair Pay Act into law without first posting it on the White House Web site for a five-day public comment period. Now it looks like he's done it again with the bill to reauthorize and expand the State Children's Health Insurance Program.

Obama promised on both his transition Web site, change.gov, and the White House Web site's ethics page (PDF) (before it got taken down) that he wouldn't sign any non-emergency bill into law without first posting it on whitehouse.gov for public comment five days before. But the first bill he signed into law, the Lily Ledbetter Fair Pay Act, wasn't posted online until after Obama signed it.

This time he did a little bit better: He posted the SCHIP bill online on Sunday (albeit during the Super Bowl) and signed it into law on Wednesday. We've called the White House to see what's going on and are waiting to hear back. In the meantime, White House spokesman Reid Cherlin gave this statement to CQ Politics:

We will be implementing this policy in full soon; currently we are working through implementation procedures and some initial issues with the congressional calendar. In the meantime, we will continue to post legislation on our website for comment as it moves through Congress over the next few weeks.

Let’s see what happens with bill No. 3.