This story was also published in The Seattle Times on Sunday.

As a symbol of the national foreclosure crisis, Jaymie Jones isn't what you might expect.

The 52-year-old Seattle-area woman worked her way up in the financial-services industry over three decades from bank teller to mortgage executive.

In spring 2007, she bought her dream home in Kirkland, signing a 30-year, fixed-rate mortgage.

Then, as Jones celebrated New Year's Eve on a beach in Mexico, the call came: Her division was shutting down. Jones tapped her savings over the next year and tried for a loan modification, but in the end, the bank filed to foreclose. The dream was over.

In the conventional narrative of the foreclosure crisis, rapacious lenders hooked up with irresponsible buyers in a tale of "Lending Gone Wild."

There was certainly much of that. But a Seattle Times-ProPublica analysis of foreclosures from three areas hit hard by the housing crash tempers that image -- and punctures some other popular notions about the mortgage meltdown.

Most of those in foreclosure were young people, right? Not true. Like Jones, half of them were over age 40.

Predatory lending caused foreclosures, correct? In fact, nearly three out of four loans did not have any of these three key predatory loan features -- balloon payments, prepayment penalties and high interest rates.

And as for the common assumption that most people in foreclosure lost their homes? Surprisingly, not so. More than half of them were able to keep their homes, with some selling them for more than they owed.

The Times-ProPublica analysis provides new insights into the foreclosure crisis and helps fill an acknowledged gap: Much of the data on home loans is insufficient, hidden or hard to obtain.

Although politicians and regulators have moved to gather more information about lending practices and foreclosures, consumer advocates say progress is too slow. And it's unclear how much will be made public.

"For those of us who want to understand how the foreclosure crisis has affected borrowers and communities, it is frustrating to not have access to publicly available data that can really help us to understand what happened and why," said Carolina Reid, a research manager for the Federal Reserve Bank of San Francisco.

Even a basic number -- borrowers in default or foreclosure -- is hard to pinpoint, said Guy Cecala, publisher of Inside Mortgage Finance, a leading trade publication. That's because those who track the data have no way to weed out homes that are counted multiple times because they've gone into and out of the foreclosure process more than once.

Cecala's best guess, based on industry surveys: 4.8 million homes are in serious delinquency or foreclosure.

But, "even the best foreclosure numbers don't give us the reason for the foreclosure," Cecala said. "It's hard to address a problem when you don't know all the causes of it."

Debate about root causes of the crisis has re-emerged in recent days with a partisan split on the Financial Crisis Inquiry Commission about whether failed government housing policies or private-sector lending abuses deserve the most blame.

To address the lack of information about foreclosures, The Seattle Times and ProPublica decided to create a database that could provide some answers. Reporters pulled a random sample of more than 1,200 foreclosure filings from 2005 through 2008. That entailed around 400 filings for each one of the central counties encompassing the Seattle, Phoenix and Baltimore areas.

Overall, the data underscore how the housing bubble and lower lending standards of the era reinforced each other, seducing many homeowners to get in over their heads. Comparing the three counties also reveals regional differences in the profiles of those who got into trouble.

In the Phoenix area, one of the biggest housing bubbles in the nation suddenly burst, unleashing an equally sudden wave of foreclosure filings.

In the Baltimore area, job losses in an aging city threatened home purchases and neighborhood revitalization.

And in the Seattle area, longtime homeowners responded to lenders' aggressive pitches by tapping into rising equity, taking on more debt, and refinancing into adjustable-rate mortgages. 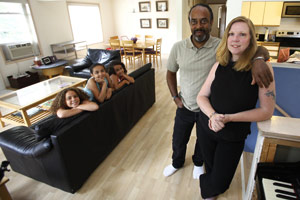 Home values in King County, where Seattle is located, grew nearly three times faster than household income from 2000 to 2008, with barely a lull after the dot-com bust at the beginning of the decade.

About 40 percent of homeowners in the Seattle-area foreclosure data had owned their houses for more than five years. One out of five had owned for a decade or longer -- long enough to build up substantial equity.

That may help to explain one defining aspect of the Seattle area foreclosures: About half involved refinancing, the data show, a much higher rate than in the Phoenix or Baltimore areas.

The most common loan? A hybrid adjustable-rate mortgage that reset to higher payments after two years, a product that encouraged repeat refinancing.

Some homeowners cashed out their equity to pay debt, make home improvements or finance a business. Homeowners also lost equity as refinancing added hefty loan fees to their debt.

Stephen and Natalie Simmons, both community-college teachers, for example, bought their Seattle home in the mid-1990s with a high-interest fixed-rate mortgage. But, like other homeowners, they heard from mortgage lenders encouraging them to refinance to an adjustable mortgage. The pitch: Save money by rolling high-interest consumer debt into a lower-interest mortgage.

"There's so much we didn't understand in terms of this industry," said Natalie Simmons.

From 2003 to 2007, records show, the couple refinanced their home four times with hybrid ARMs. The last one in 2007, near the peak of Seattle's market, gave them a down payment on a larger home in the suburbs.

The couple said they planned to pay it off quickly by selling their Seattle home, but then property values fell.

Like other homeowners in foreclosure, they couldn't refinance their Seattle home again because it was worth less than the mortgage debt.

The bank foreclosed on their suburban house. They escaped a similar fate on their longtime Seattle home only through a federal loan-modification program.

Lili Sotelo, managing attorney at Northwest Justice Project, said she's seen thousands of homeowners who got caught up in the refinancing frenzy.

"[Borrowers] thought they had to get on the equity train," she said. "No one thought the train was going to crash." 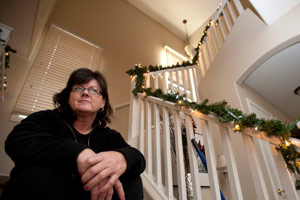 Surrounded by vast tracts of desert, Phoenix and Maricopa County experienced an unrivaled housing boom in the past decade. From 2000 to 2009, no county added more housing units.

Sarah Murphy saw the new model home she purchased in 2006 as something she could sell once her children moved out, then get a smaller place.

"Never in my wildest dreams did I think the value would go down," said Murphy, 50. "I've owned six homes over the years and never lost money."

Murphy worked for US Airways and had sold her previous home for a profit. She put 20 percent down on the $391,000 house, which had the extra space she needed to accommodate her children and her mother.

But then home prices turned. "Within six months of moving in, neighbors started moving out," Murphy said. "They said it wasn't worth staying in the house -- to keep paying as the price goes down."

The data show that half the Phoenix foreclosures started quickly -- within a year of the loan being made. Nearly 60 percent were for mortgages issued in 2005 or later -- double the rate of Baltimore or Seattle.

She used the developer's mortgage company to avoid an extra fee. The adjustable loan had a low starter rate of 1.25 percent and a ceiling of 9.95 percent. "I wasn't worried because, with my job, I could afford it," she said.

Two years later, Murphy was laid off. To keep up with payments, she began "liquidating her life," selling her car, camera equipment and other belongings. But she soon became delinquent on her mortgage.

Murphy filed for bankruptcy in May 2008. Her home was set for auction that August, but in an 11th-hour reprieve, her lender approved an adjustment that added $30,000 in fees. She is now working two jobs and hoping to get a more affordable modification.

"I've got the tenacity to get through this," she said. "If I walk away, it's a lose-lose for everybody." 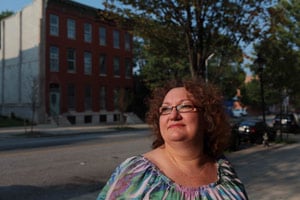 In 2001, Baltimore-area housing prices were still climbing and things looked hopeful for some of the city's dilapidated 19th century neighborhoods. Natives Julie and Ralph Guy dreamed of renovating an old row house to its original glory.

The Guys, like many other Baltimore borrowers who ended up in foreclosure, weren't looking for a refinance; they were buying a home.

Purchasing in Baltimore was doable for lower-income families like the Guys. Julie worked with developmentally disabled adults, and Ralph did carpentry. When they bought in 2001, the median price was about $58,000, about half that in Washington, D.C., an hour's drive away.

In their late-30s, the couple settled on an 1860s brick row house in the Union Square neighborhood, originally settled by Irish and British immigrants. They paid $35,000 and added $27,000 to the mortgage to pay for the restoration.

"We looked at 37 houses," Julie Guy said. "My husband is a research freak, and it still wasn't enough."

When the housing market took a turn, along with the economy, many borrowers faced job losses and were unable to keep up with their mortgage payments. In the Guys' case, a health-related issue contributed as well. For eight months in 2006, Julie Guy worked only part time while she was being treated for breast cancer, straining their finances even more.

Half the foreclosures in the city and county of Baltimore involved fixed-rate loans, and the Guys' mortgage, a 30-year-fixed note, carried 8.5 percent interest. Though relatively high, the rate didn't trigger the couple's problems -- a leaky basement did.

Three inspectors had declared the house sound, but after the Guys began tearing out plaster, they found water damage down to the foundation. Repairs quickly devoured what the Guys had borrowed to renovate. They used credit cards to pay other expenses and took out a consumer loan at 18 percent.

"Neither one of us is stupid," Julie Guy said. "During the boom, everybody presented themselves as expert. We just got bad advice all along the way."

After months of negotiations, the Guys obtained a loan modification. Their interest rate dropped to 5.37 percent, and their payment went down $200 a month. Like many other homeowners who entered foreclosure, the Guys kept their home. But the renovations are far from over.

"It's still my dream house," Julie Guy said. "I wouldn't trade it for anything."

Jones, the Seattle mortgage manager, was on the opposite end of the income spectrum from the Guys.

She directed a wholesale lending team for National City that supplied mortgage brokers and small banks with loans, including second mortgages.

"We only dealt with A, A+ borrowers," she said, not first-time homebuyers with poor credit histories.

When National City laid her off on New Year's Eve in 2007, she owned four homes: two of her former residences that she was renting out; a vacation home on the Washington coast; and her new Kirkland home.

Jones drained her savings to keep paying the mortgages, refusing to declare bankruptcy. She eventually sold two of the homes, but it wasn't enough.

Her mortgage servicer filed to foreclose on her new place in August, wrecking her once-sterling credit score. After more than 20 months waiting for the servicer to decide on her loan-modification, Jones canceled her request and is hoping for a short sale.

She cashed out her retirement account and with a friend started VoVina, a bar on Kirkland's waterfront.

Jones said she figures selling alcohol during hard times is a sure bet.

Get ProPublica's investigations and major stories delivered to your inbox.