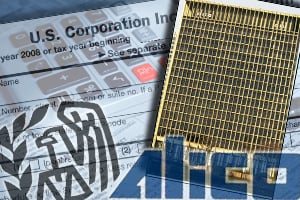 As AIG looks for cash to repay a $60 billion taxpayer loan, one option stands out as a potential way to rake in billions: the sale of American Life Insurance Company, or Alico, a consistent star performer in AIG's vast constellation of insurance subsidiaries.

But an unresolved tax issue -- one the company has not disclosed to possible buyers -- could complicate the sale and hamper AIG's ability to repay the bailout. In a worst-case scenario, it could decimate Alico's business, according to documents and interviews with company officials.

The tax issue relates to a 2004 Internal Revenue Service ruling that says life insurance and annuity products similar to those Alico sells to foreign clients are subject to U.S. income tax withholding. If forced to comply with the ruling, company officials say Alico's clients would likely flee to competitors -- with potentially dire consequences.

"It is unlikely that Alico's business would survive, much less be sold for a price that would help AIG repay its indebtedness to the Treasury," David Rosenbloom, an international tax expert hired to advise Alico, wrote in a draft letter to the IRS.

The company said that line was later cut from the final letter, which it declined to release. But in an interview, Rosenbloom insisted that withholding taxes on foreign clients "would not be a viable business practice" for Alico, which operates exclusively overseas.

AIG has been shopping the subsidiary to buyers for months and had received one offer as of Feb. 9, when a first round of bidding closed. But as it sought suitors, the company did not disclose the withholding issue.

The matter is not mentioned in a confidential, 420-page marketing memorandum on Alico that was obtained by ProPublica. Nor is it among "data room" materials compiled for a sale, said Dennis Vigneau, Alico's chief financial officer.

"We haven't talked to the buyers about it," said Vigneau. "It will ultimately be discussed with the buyers, but there's a time and a place for it. And in the initial stages, until you know who's a serious buyer and who's not, it's just not enough time to take folks through it."

Vigneau and Rosenbloom said they were confident the IRS would take Alico's side. Divulging the withholding issue would raise unnecessary questions and potentially give bidders a "red herring" argument for driving down the price, they said.

"If I were representing a buyer of Alico and I knew about this issue, hey, I would definitely tell Alico, 'Well you've got to discount this. It's a huge issue. There's a lot of money involved. It's uncertain. I can't pay you anything near what you tell me the value of this is. I gotta have at least a 25 percent discount,'" said Rosenbloom. "So that's the concern here."

Yet experts contacted by ProPublica said that withholding such information is risky.

Companies generally have a legal duty to disclose material facts about their business to buyers and regulators, said George Boychuk, a mergers and acquisitions partner at Ziegler, Ziegler & Associates LLP, which has worked on several multibillion-dollar deals.

"They're acknowledging that this is a real issue, that any buyer would consider this material," Boychuck said. "If I'm representing the target company here and they've got this tax issue -- and it's something that could destroy their whole business model -- it sounds to me like it's clearly material."

Alico operates in more than 50 countries around the world and is one of AIG's two biggest overseas insurance subsidiaries. The company sells a wide variety of life insurance and annuity products that result in payments to its clients. Although domiciled in Delaware, Alico operates exclusively outside the United States, and nearly all its clients are foreigners.

In its 2004 ruling, the IRS held that income paid to non-U.S. customers from annuity and life insurance products is subject to 30 percent withholding. "The insurance industry hated it," Rosenbloom said. The ruling was "very, very controversial, but a lot of insurance companies changed their policies on the basis of it," he said.

Alico had always operated on the assumption that it did not have to withhold taxes for foreign clients because it was a so-called 80/20 company -- a firm that earned at least four-fifths of its income overseas.

But the 2004 ruling does not specifically address 80/20 companies. Alico is now asking the IRS for a private ruling that such companies are exempt from the withholding requirement, which, Rosenbloom argues, is consistent with how the IRS has long treated other sorts of products.

According to Rosenbloom's draft letter to the IRS, the company makes about 1 million payments to foreigners a year -- totaling more than $10 billion annually.

Despite the 2004 ruling, company officials said they never kept withholdings. "To institute withholding for what could be millions of policyholders, many of them dealing, by the way, in Japanese or other foreign languages...would not be a viable business practice," said Rosenbloom. "It is my opinion that Alico has acted properly in not withholding tax."

Vigneau said Alico hasn't tried to estimate any potential financial liability because the company has always believed it is exempt. "To be honest, we've never calculated any exposure, because from our perspective, it's so crystal clear that we're not subject to these exposures," he said.

How much AIG might fetch for Alico from any bidder is far from clear. Some analysts have put the value at between $15 billion and $30 billion.

The company estimated its 2008 revenues at $10.6 billion and its after-tax income at $1.5 billion, according to the draft offering memorandum. However, the document also discloses problems at Alico's flagship branches in Japan and the United Kingdom, where clients withdrew $3.5 billion after AIG turned to the government for help in September.

Alico's Japan branch also needed a $2 billion capital injection from AIG after the value of AIG shares held by the subsidiary plummeted from more than $3 billion to about $30 million last year.

AIG recently sold insurance subsidiaries in Brazil, Canada and other countries for about $2 billion combined, according to newsreports. Former CEO Maurice R. Greenberg has complained that the company is being dismembered at fire-sale prices in a historically bad market.

Discussion of the withholding matter could not be found in AIG's filings with the Securities and Exchange Commission or in annual filings with insurance regulators in Delaware.

The Treasury has committed up to $152 billion to the AIG rescue package. In addition to the $60 billion loan from taxpayers, the Federal Reserve has taken more than $52 billion in troubled assets off AIG's books, and the Treasury bought $40 billion in preferred stock.

AIG will struggle to repay the bailout unless it can sell its foreign life companies for a good price, said Gary Ransom, an insurance analyst at Fox-Pitt, Kelton.

"In order to pay it back in the time that they have available, I think they need to sell a major portion of the foreign life operations," he said. "And that would include Alico."