When reporter Catherine Rentz began looking at the criminal histories of men who’d been arrested for rape based on DNA evidence, she found a system that protected serial criminals rather than survivors. 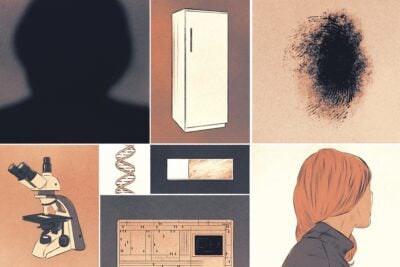 In my last dispatch, I told you about beginning to look into the criminal records of the men arrested as a result of officials testing cold-case evidence in Baltimore County. Today, I want to finish that story, walk you through how I enlisted the help of academics, and reveal some of the surprises and challenges I faced once I began reporting beyond the data.

First, I want to begin with a line that has stuck with me from the 2017 HBO documentary “I Am Evidence” about backlogged rape kits.

“These rape kits are the best bargain in the history of law enforcement,” said Timothy McGinty, the Cuyahoga County, Ohio, prosecutor, after he saw the results of processing nearly 5,000 untested rape kits. At least one out of every four alleged perpetrators identified through the mass testing turned out to be a suspected serial offender. Cuyahoga’s investigations had led to more than 800 indictments as of September 2020.

Money had long been used as an excuse not to test these kits, but as I looked up the criminal histories of the dozens of men who’d been arrested as a result of testing a small sample of DNA, I had to ask whether that money could be saved by preventing other crimes.

The original database I built was not organized to answer this question. It tracked the arrested men, but it was not set up in a way that could quantify and parse their other crimes for deeper analysis.

I reached out to ProPublica and to Rachell Lovell, a Ph.D. researcher from Case Western Reserve University, to help me expand it and code the types of crimes. Lovell had sat on a task force McGinty created to process and analyze rape kits and had published related research.

Academics have more time to ponder the bigger picture than journalists or law enforcement, and they can be invaluable resources. Lovell and Rebecca Campbell from Michigan State University are two of the country’s top researchers who are changing attitudes about sexual assault through timely research into unprocessed rape kits.

They reminded me of Wendy Carr, the psychologist character on “Mindhunter,” the Netflix series based on the FBI’s elite serial crime unit, who systematically organized the interviews with convicted criminals to find patterns that could help solve other crimes. These women are doing the same thing with rape kit data as the nation processes warehouses full of untested evidence.

I enlisted the help of one of Lovell’s fellow researchers and co-authors, Laura Overman, to take what I had begun and rebuild it. Overman transformed it into a more searchable database, filled in gaps, coded the crimes and conducted an analysis similar to the one the team did in Cleveland, with a few modifications.

We ultimately ended up with a database of approximately 1,500 criminal records representing charges filed against close to 50 men for felonies or other serious crimes. ProPublica graphics journalist Lucas Waldron transformed many of those records into a simple and impactful graphic revealing 18 suspected serial rapists, many of whom also committed other violent crimes such as murder and assault.

But the data presented only one side of the story. Developing a document trail and sources proved more challenging.

I obtained the case files of serial rapist Alphonso Hill, who became a central figure in my investigation. As I thumbed through the files, I was blown away. I found a list of 30 sexual assaults that detectives had linked to Hill by either modus operandi or DNA. He had only been convicted of 10 rapes. (Initially, he had denied committing most of them; he eventually confessed to those for which he was charged and there was a DNA connection.)

Police granted me access to the reports for many of the cases through public records requests, but blocked the release of about half of them, telling me the cases were still open.

This was the beginning of a struggle for documents with the police, which I had not anticipated given that most of the cases were more than three decades old.

It was a contrast to what I’d seen in other cities.

In Cleveland, McGinty had invited Lovell and a journalist, Rachel Dissell, to sit on the task force charged with processing the unsubmitted rape kits. The two planned to learn as much as they could from the testing results and disseminate their lessons. Lovell had access to forensic reports and raw law enforcement data, from which she developed one of the most detailed databases on sexual assault in the country. In turn, their research found trends that helped local law enforcement better target violent offenders.

Baltimore County’s State’s Attorney Office had been incredibly helpful in sharing public records and interviews, but no centralized task force had been organized to process the DNA and analyze and disseminate the results. Police were and still are doing most of the work on the cold cases. I have had to appeal to officials to get questions about the cold-case DNA cases answered, or to obtain access to related police reports and other public documents.

McGinty and Kym L. Worthy, the Wayne County, Michigan, prosecutor, saw both the horrifying lapses caused by past undertesting and the promising results of the “test everything” approach; both were now vocal advocates for mass testing. They established a clear line between past transgressions and present positive actions. They allowed cameras in, let data out, and posted information online.

The U.S. Department of Justice began touting their findings and urging police departments that are receiving federal grant money for testing to be more transparent and engage with media.

The old ways of ignoring most of the rape evidence and shielding data and records had protected career criminals, not the survivors, and had cost the justice system and residents millions of dollars.

To answer the question I started with: Was it more cost effective to test the rape evidence earlier? In many cases, DNA testing was not available at the time the evidence was collected. But in other cases, it was. New research by Lovell indicates that the government saves substantial money by testing, investigating and then, if possible, prosecuting all of the cases.

Her findings indicate the Cuyahoga sexual assault kit initiative saved the community $26 million, or $5,127 per kit, including the tangible and intangible costs of future sexual assaults averted through convictions.

After I began conversations with cold-case survivors, including Laura Neuman, and wrongly convicted men like Bernard Webster, it became clear how these crimes permeated every part of their personal and financial lives and led to a myriad of other costs to the criminal justice system and other victims.

Piecing together investigations of Hill in both city and county jurisdictions, I found that the serial rapist had left significant clues behind about his identity as early as 1979, before most of the rapes had occurred. Could most of these rapes have been prevented?

It wouldn’t be until my interview with retired Sgt. Rose Brady that I began to understand how vested the police had been in finding the perpetrator and the many efforts detectives made to get him in the 1970s, 1980s and 2000s.