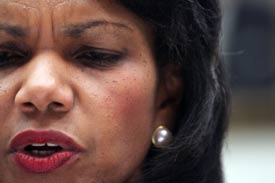 As Hillary Clinton inches closer to a new role as secretary of state, she’s set to inherit a troubled Foreign Service program initiated by her predecessor. The current issue of Foreign Service Journal takes a look at the initiative, a key component of Sec. Condoleezza Rice's Transformational Democracy initiative, and concludes that its track record falls somewhere short of transformational (PDF).

The Global Repositioning Program, started in 2005, was devised in order to address the disparity between the Foreign Service’s presence in developed and developing nations: Before the program was initiated, there was one Foreign Service officer in Germany for every 200,000 people, compared with one for every 25 million in India, and every 40 million in China.

The program planned to transfer hundreds of Foreign Service jobs to emerging nations, mostly from positions in Washington, D.C., and Europe. Experts widely agree that a greater Foreign Service presence in emerging nations is crucial, but the State Department’s decision not to request additional funds to realize that goal was a "critical flaw," reports the Journal.

Instead, a secretive group of ten senior staff members implemented a net-zero approach to repositioning existing resources: Eliminate a position here, create one there. But a simple-sounding process turned out to be anything but that. For one thing, the new positions were costlier, often requiring the elimination of two or three positions in the U.S. In addition, Foreign Service offices receiving new employees were given little warning or resources for extra office space, housing, vehicles, administration staff, etc. to support the new officer. Meanwhile, the offices losing staff saw no equivalent reduction in their workload.

Another key part of the plan – one-person posts in areas outside national capitals – hit a snag when they were designated as consulates, a term that carries a host of complicated legal issues. Only two of these positions have actually been put in place. A separate plan for virtual posts, monitored mainly through online communication, was dismissed by one officer as, "A joke. A Web site, nothing more."

What the Journal describes as the "half-baked" program has sapped resources at a Foreign Service already hobbled by a cash crunch: The president of the American Foreign Service Association told Congress in July: "Unfunded mandates include 324 positions in Iraq, 150 in Afghanistan, 40 in the office to coordinate reconstruction efforts, [and] 100+ training positions to increase the number of Arabic speakers." Contrast that with the $1 billion the U.S. has doled out for State Department security contractors in Iraq.

It remains to be seen what the incoming secretary of state will do with the program, but its critics don’t expect it to last. They’ve called it "just the latest bumper sticker in a slogan-rich political environment, doomed to pass into oblivion once the administration ends."