Like many cities, New York City began equipping its police officers with body-worn cameras a few years ago. The footage is often invaluable evidence for the civilian agency charged with investigating complaints about NYPD abuses.

But first, the agency’s investigators need to get the footage. And increasingly, the NYPD is not turning it over.

In May, New York City’s Civilian Complaint Review Board requested body-worn camera footage for 212 cases involving possible misconduct but received only 33 responses, according to a recent internal memo.

The NYPD’s responsiveness has “steadily gotten worse,” stated the memo, which was obtained by ProPublica. The memo warned that “the situation is untenable.”

If investigators get bodycam footage, CCRB data shows, they are far more likely to get to the bottom of a case. Without it, they usually can’t, and often end up closing cases without finding out what really happened.

A spokesperson for the NYPD said the coronavirus pandemic and other “unprecedented events” have caused the police to deploy “many officers into the field and away from administrative assignments.” The NYPD noted that it has recently shared 703 videos related to complaints stemming from the police protests. (Here is the NYPD’s full statement.)

While the pandemic has exacerbated the issue, the NYPD’s responsiveness began to be problematic much earlier. In early 2019, the percentage of alleged abuse cases waiting for NYPD footage spiked more than fourfold, to 37%. A CCRB report noted “mounting delays in the receipt of key evidence, especially BWC footage.”

The delays in turning over footage can have a significant effect on whether police officers are held accountable when people come forward with accusations of misconduct, such as racially profiling or pistol-whipping a person. There’s an 18-month statute of limitations on bringing any discipline charges against NYPD officers, whether the charges are initiated by the CCRB or by the department itself.

Multiple entities have responsibility for investigating abuse and corruption by NYPD officers. The NYPD has its own internal investigators, and local and federal prosecutors, of course, can also bring criminal charges.

But it’s the CCRB that’s supposed to provide an independent venue for complaints against police. The agency has the authority to investigate everything from officers being discourteous to police violence against civilians. It was the CCRB’s investigation of the 2014 death of Eric Garner after an officer used a chokehold that ultimately led the NYPD to fire the officer.

As ProPublica recently detailed, the NYPD has nearly complete discretion over how much it cooperates with CCRB investigations. While the CCRB can recommend punishment, the police commissioner can and often does decide to do otherwise.

That discretion extends to footage from body-worn cameras. CCRB investigators have to submit individual requests. The NYPD has often responded to the requests by saying the footage doesn’t exist — only for the CCRB to later discover it does.

The CCRB and NYPD worked out an agreement last year to allow civilian investigators to be in the room while officers search for footage. Implementation of the deal has been delayed by the pandemic. When it does start, CCRB investigators still won’t have direct access to the files.

The CCRB staffers who sent the memo wrote that their agency should have the same setup. They urged the agency’s leadership to “seize the moment and do everything possible in its power to obtain unmediated direct access to BWC footage.”

Asked for comment, the chair of the CCRB, the Rev. Frederick Davie, said in a statement that he agrees that investigators should have direct access. “The Board and staff have long believed there should be unfettered access to body-worn camera footage, and I share their concern about the backlog,” said Davie, who was appointed as chair in 2018 by Mayor Bill de Blasio. “As we have seen in recent weeks with the influx of police misconduct allegations, direct access is a necessary tool for the CCRB to fairly and impartially investigate these matters as efficiently as possible.” 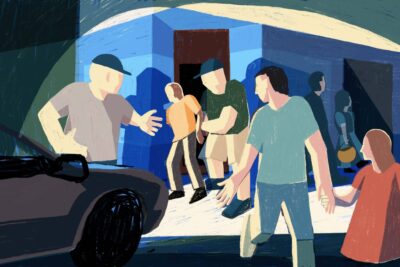 My Family Saw a Police Car Hit a Kid on Halloween. Then I Learned How NYPD Impunity Works.

ProPublica Deputy Managing Editor Eric Umansky’s family saw an unmarked NYPD cruiser hit a Black teenager. He tried to find out how it happened, and instead found all of the ways the NYPD is shielded from accountability.

New York’s CCRB has long sought more authority and independence but has faced opposition from the NYPD and police unions. When the agency was created nearly 70 years ago, it was led by NYPD officials. The CCRB now has a 15-member board, appointed by the mayor, the City Council and the police commissioner. It has about 200 investigators and other staff, who field about 7,000 complaints per year.

Concerns about the NYPD’s handling of body-worn camera footage not only predate the pandemic, they go beyond the backlog. A CCRB report from February that focused on bodycams said that a change in NYPD policies last year “led to an increase in the number of cases where BWC footage was either redacted or withheld in its entirety.”

The report also said that the CCRB had found instances “where officers have used signals to prevent or halt the recording of police misconduct.” In other instances, the report said, officers warned colleagues that the cameras were on: “Officers were frequently heard using phrases such as, ‘I went Hollywood,’ ‘Green,’ ‘I’m/We’re live,’ and ‘I’m hot.’”

Bodycam footage can be quite valuable for officers facing allegations of abuse. The rate that the CCRB substantiates abuse more than doubles if it has footage — from 14% to 32%. But the rate of investigators concluding that complaints are unfounded also jumps: It triples, from 4% to 15%.

One of the authors of the recent CCRB warning on the backlog, Olas Carayannis, also circulated an internal memo last year about the very same issue. “Unless there is a significant change, the backlog of CCRB requests for video evidence will continue to increase and will impair the CCRB’s ability to complete investigations within the 18-month statute of limitations,” Carayannis wrote.

“The CCRB is currently in a position where it is missing necessary evidence in hundreds of cases, and is in jeopardy of exceeding the statute of limitations in those cases,” he added. (Carayannis did not return messages from ProPublica.)

The backlog has gotten worse since then. As of last week, the new memo says, there were about 1,100 unfilled requests for footage.

Do you have information about oversight of the NYPD? Email [email protected]. Here’s how to send tips and documents to ProPublica securely.

Correction, July 3, 2020: This story originally misstated the number of members on New York’s Civilian Complaint Review Board. There are 15 members, not 13.