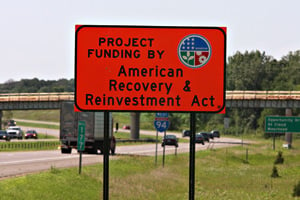 New stimulus job numbers are due today, and early reports state that 650,000 jobs have been created or saved by the nearly $800 billion package. The White House says this puts it on track to achieving the goal of 3.5 million stimulus jobs by the end of 2010. The report coming out today is based on the first $150 billion in spending, and will provide a broad, concrete look at the stimulus’ impact on the economy. And creating it was no easy feat. A whopping 131,000 reports will be uploaded to the government’s stimulus Web site, Recovery.gov. Need a bit of help wading through it? We’ll be posting a guide to what’s new, what’s missing and what to watch for.

It’s going to be a race to the finish to claim small business loans, the Columbian reports. Less than 30 percent of the Small Business Administration’s stimulus funds remain, and officials there expect that the money will run out by late November or early December – a full month before the agency expected. The SBA received $730 million in stimulus funds for small business lending. Through the program, the agency waived loan fees and raised loan guarantees from 75 percent to 90 percent. When the program ends, an SBA representative told the Columbian, the big concern is that banks will stop issuing as many loans.