Ohio was once the home of the Old Guard, Main Street, county Chamber of Commerce Republican Party: stolid, sober, civil, fiscally conservative, socially enlightened. Dead serious in all matters. But 2016 was the year when people who were not used to being taken seriously had to be taken very seriously indeed, even in Ohio. This was true of Donald Trump, of course, but it was also true of the people who had fueled his campaign.

There was Don Phillips, an elderly catering-hall owner that I met in the Dayton suburbs, a fixture of the local G.O.P., who fired off an angry letter to John A. Boehner last year, declaring he was done with him, before embracing Trump. Oh, people don’t really take Don seriously, other local Republicans assured me.

And there was the Butler County sheriff, Rick Jones.

Jones has long been something of a caricature. A tall, hulking man with a walrus mustache, Jones cultivates the image of a Wild West-style lawman, even if his territory between Cincinnati and Dayton is distinctly lacking in tumbleweed: 469 square miles of exurbs, farmland and frayed manufacturing towns (including Middletown, the setting of J.D. Vance’s best-selling memoir, “Hillbilly Elegy”). He has managed to conjure a border-country aura by casting himself as a crusader against undocumented immigrants, even if they are relatively scarce in Butler County, posting an “Illegal Aliens Here” sign outside the county jail, sending the Mexican government a $900,000 bill for the undocumented Mexicans he was holding there.

Early this year, in January, I went to meet Jones at his office adjacent to the jail, a large room with a large desk and all manner of certificates and news clippings attesting to Jones’s accomplishments covering the walls. Right away, it was clear that something had changed for him. In local Republican circles, he had always been something of a fringe figure. He had threatened a primary challenge of John Boehner, who represented Butler County, but never followed through on it. And, unlike most elected Republicans in the state, he was backing Trump, not the state’s governor, John Kasich. Yet now, as I entered the office, I saw that Jones had another visitor: the campaign manager for Bill Beagle, a state senator who was running in the Republican primary to replace Boehner. Beagle was a mild-mannered, business-minded conservative, very much in the Boehner mold, and yet here his emissary was, seeking the endorsement of Jones. 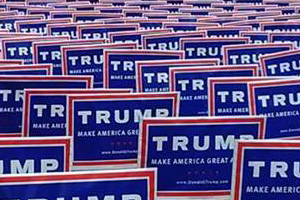 Hillary Clinton and the Democrats were playing with fire when they effectively wrote off white workers in the small towns and cities of the Rust Belt. Read the story. 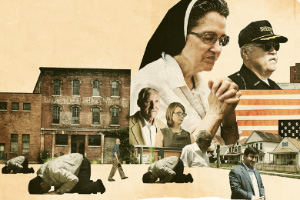 Dayton was once a bastion of the GOP establishment. The story of how the city changed helps explain the rise of Donald Trump. Read the story.

We opened with small talk about Baltimore, where I live, which prompted Jones to lay into the city’s chief prosecutor, Marilyn Mosby, who had charged six police officers in Freddie Gray’s death, and whom Jones confused with the city’s mayor, Stephanie Rawlings-Blake, also a black woman. “I believe she speak with forked tongue,” he said.

He then drifted into his favorite subject, immigration, as he recounted one of his visits to inspect the United States-Mexico border in Texas. “People can’t leave their ranches, because they come in and they killed the one rancher soon after we were there,” he said. “People have no idea. There’s no nothing, it’s just no fence at all. And the fence is only put up in certain areas, but then you’ll see big, giant holes cut in this fence.”

He talked about the Mexican suppliers behind the thriving local heroin trade. He pointed to a neighborhood of humble bungalows behind the jail where, he said, Mexicans now lived among blacks and Appalachian whites. “When I go over here to this community, I see five satellite dishes on the top of the roof, and a van pulls up and takes them to a little workplace, and they work the hell out of them,” he said. “They get abused … and can’t report it. It’s screwed up. Everything is screwed up.”

The next time I saw Jones was two months later, at the annual dinner for the Butler County Republican Party, just before the state’s primary. By this point, Jones had endorsed Beagle and filmed an anti-illegal-immigrant ad for him. But Jones was still the odd man out at the party dinner, where Kasich supporters predominated. He told me proudly that he was going to officially introduce Trump the next day at an event just a mile away.

On Nov. 8, Trump won Butler County with 62 percent, the same that the establishment man, Mitt Romney, received four years earlier. Jones was easily re-elected sheriff. He would still have to deal with John Kasich in Columbus. But he would have his man in Washington.