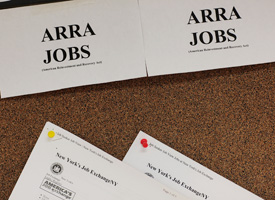 A bevy of articles and analyses -- including one by ProPublica back in February -- have pointed out that stimulus money seems to be flowing disproportionately to states with low unemployment. A New York Timescolumn and analysis finds that pattern holding true even when a broader definition of unemployment is, uh, employed. The Times includes in its figures part-time workers who would rather be working full time, and people who want jobs but have not been actively applying within the last month. Using that measure, national unemployment jumps from 9.5 percent to 16.1 percent, and five states -- California, Michigan, Oregon, Rhode Island and South Carolina -- have greater than 20 percent unemployment. "The stimulus isn't helping as much as it could," according to the column, "because too much of the money is going to states that need it the least. In most of the Great Plains and Mountain West, the broad jobless rate was still below 12 percent this spring. In North Dakota, it was 7.8 percent. Yet these are some of the places receiving a disproportionate share of stimulus."

On Tuesday, President Obama was in Michigan, which is tied for the second-highest broad unemployment rate with 21.5 percent, reminding people that the stimulus package was never meant to be an overnight miracle. The president had his work cut out for him, as he was greeted by editorials pessimistic about the stimulus in The Detroit News and the Detroit Free Press. "Obama's stimulus plan is not working," declared a  Detroit News headline. The article said that, even though stimulus spending on shovel-ready projects is ahead of schedule, "it has not pushed economic growth upward. Even the construction industry, flush with cash ... is lagging last year's performance." It also accused Obama of taking "fiscal irresponsibility to unprecedented heights," with a stimulus that puts the nation at risk of "devastating" inflation while not producing a bounty of jobs.

State highway officials jumped into the debate on Tuesday, defending the pace of the stimulus and how the money has been distributed. About 2,000 projects are under way and 3,600 more are in the pipeline, the American Association of State Highway and Transportation Officials said. The Government Accountability Office reported last week that states weren't giving priority to economically distressed areas. The highway officials said that 51 percent of the money is being spent in disadvantaged areas. U.S. Transportation Secretary Ray LaHood is expected to continue in that vein today in a speech at the Center for National Policy.

Continuing on the transportation front, some in Congress are taking the opportunity to frame the upcoming highway funding bill as a second stimulus of sorts. On Thursday, the House Transportation and Infrastructure Committee will hold a hearing, titled "The Importance of Long-Term Surface Transportation Authorization in Sustaining Economic Recovery."

While Obama was in Warren, Mich., EPA administrator Lisa Jackson was in Puerto Rico on Tuesday to highlight water infrastructure projects paid for by the stimulus.

And now for the stimulus project most likely to end up in a report by Sen. Tom Coburn: $700,000 for crab traps. The Associated Press reports that the grant will go to hire Oregon fishermen to retrieve the steel-mesh, iron and rubber "crab pots" that litter the ocean floor, tangling boats and killing turtles and whales.