Every week, we take stock of how the week unfolded for the five stories we're tracking in Scandal Watch (see the right sidebar). 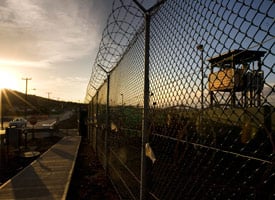 The Washington Post published an account of the 2006 suicides of three Gitmo detainees, suggesting the guards were negligent in preventing the deaths. Today's follow-up article contends that one of the detainees was set to be transferred to his native Saudi Arabia and released when he killed himself.

Meanwhile, the federal judge overseeing the suits brought against the government by Gitmo detainees said that he fears the detainees will be blocked from the proceedings when critical evidence is shown.

The New York Times obtained statements made in court by two soldiers that say they, along with another soldier, executed four handcuffed, blindfolded Iraqi detainees in 2007. The soldiers have not been charged with a crime yet, but those close to the case say all three will probably be charged with murder.

Also, the trial of the ex-Marine accused of murdering four Iraqi detainees in Fallujah in 2004 came to a close this week with an acquittal. The trial marked the first time war crimes have been tried under federal law.

Spending on private security contractors in Iraq is expected to reach $1.2 billion this year, reports USA Today. That figure has risen to an all-time high primarily because more troops are being pulled from Iraq and supplanted with private guards.

The Wall Street Journal notes that the burgeoning ranks of private contractors in Iraq depend in part upon their immunity from Iraqi law. But the draft of a new security agreement between the U.S. and Iraq would strip contractors of their immunity ($).

Contractors now comprise more than a quarter of the workforce of the CIA and other intelligence agencies. But their use of private contractors has been criticized for driving up costs and exposing sensitive national security data to potentially untrustworthy workers.

The CIA pulled the bulk of its business ($) from intel contractor MVM Inc. this week. The Journal published a story on MVM in July, citing a whiste-blower's claims of misconduct and reckless behavior ($) by MVM employees in Iraq.

And KBR fielded a lawsuit this week alleging that it ran a human trafficking scheme with its Jordanian subcontractor. According to a lawyer familiar with the case, the contractor confiscated the passports of 13 Nepali workers, who thought they were going to work as kitchen staff in Jordan, and told them that they would be forced to work at a military facility in Iraq instead. Twelve of the 13 were executed by insurgents on the way there.

The Los Angeles Timesreports that the FBI official in charge of criminal investigations foresaw the mortgage meltdown as early as 2004.

The FDIC announced that its list of "problem" banks has climbed to 117 – up 30 percent in just this quarter. Generally, one in eight problem banks fail. The FDIC also said that it may need to borrow ($) funds from the Treasury in order to handle the fallout from more bank failures.

The California attorney general's office announced that it will not pursue an investigation into Sen. Chuck Schumer's (D-NY) role in the failure of IndyMac bank in July. Many think that Sen. Schumer's letter expressing concern about IndyMac to the FDIC in June triggered a panic ($) that contributed to the bank's failure.

ABC reports on two separate studies that concluded that a bankruptcy law championed by Sen. Joe Biden was a significant factor in the country's current foreclosure crisis. Biden, meanwhile, has reaped hundreds of thousands of dollars in campaign funds from the credit industry, which supported the law.

Last month, a federal judge ruled that former White House counsel Harriet Miers and White House chief of staff Joshua Bolten must cooperate with the House Judiciary Committee's investigation into their roles in the Justice Department's firing of nine U.S. attorneys in 2007.

Bolten and Miers asked the judge to delay enforcement of the ruling, but on Tuesday, the judge refused.

House Judiciary Committee Chair John Conyers responded by setting a date, Sept. 4, by which the White House must turn over all requested documents and postponing the day of Miers' testimony to Sept. 11. The Department of Justice responded with a last-ditch appeal.

Meanwhile, the New York Times reports that immigration judges who were illegally vetted and hired for their conservative stances have rejected a disproportionately high number of immigrants seeking asylum in the U.S.

Republicans in Alaska overlooked Sen. Stevens' recent indictment and handed him an easy win in the Republican primary this week. Even if Stevens is convicted, his name will remain on the ballot, and it will be up to the Senate to expel him.

Newsweek reports that Dick Cheney urged the Alaska legislature to push a controversial natural gas bill that benefitted VECO after Sen. Stevens told VECO CEO Bill Allen that he would find a "bigwig" to "get this done."

In other Alaska news, Alaska governor and McCain VP pick Sarah Palin is fielding allegations that she fired Alaska's public safety commissioner for refusing to fire her sister's ex-husband, a state trooper.