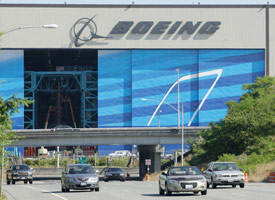 The Pentagon, after admitting its process of awarding a $35 billion contract aircraft tanker was flawed, reopened bidding to Boeing. But today, Michael Wynne, the recently-ousted Air Force Secretary, claimed that Boeing withheld critical information from the Air Force as part of a preconceived plan to challenge the bidding process at a later date.

Also, Sen. Bryon Dorgan accused an Army general of misleading the Senate about water that KBR supplied to GIs in Iraq. In 2007, the general told a Senate committee that there were no problems with the water's safety, which conflicted with future findings of a Pentagon inspector general.

Meanwhile, an ex-Army official criticized the Army's oversight of its contracts - asserting that it contracted out its oversight - and alleged that he was forced out of his job for questioning the Pentagon's relationship with KBR.

Considering all the heat these contractors have been getting, it's no surprise that they have embarked upon a PR offensive to clean up their image.

The Wall Street Journal reported that the housing industry has ramped up ($) its contributions to political campaigns recently, and several provisions that it favors have been added to the emergency housing bill.

The Wall Street Journal also reported ($) this week that federal prosecutors were investigating whether two former Credit Suisse Group brokers lied about how they invested in short-term mortgage-backed securities. Meanwhile Federal Reserve Chairman Ben Bernanke announced steps the Fed is considering to help the U.S. housing market recover that include offering low-interest loans to investment banks. Treasury Secretary Henry Paulson was also in the news after he said it was unpreventable that an estimated 2.5 million homes would foreclose this year.
The country's three largest credit-rating firms didn't have a good week as the Securities and Exchange Commission released a report that criticized them for putting profits ahead of quality controls.

And finally, a CNBC reporter that had been criticized for his reporting during Bear Stearns' fall defended himself.

The trial of Salim Hamdan, Osama bin Laden's former driver, came to the forefront this week when his lawyers filed papers with a federal court seeking an injunction against the Guantanamo Bay military commission's case against him. If granted, it would foil plans by the Bush administration to see Hamdan's trial become the first one completed at Guantanamo Bay.

Meanwhile, the federal judge overseeing the appeals of more than 200 Gitmo detainees told Justice Department lawyers to quit step on it and prioritize those cases above all others.

And finally, The New Yorker's Jane Mayer is publishing a new book that cites a Red Cross report concluding Bush administration officials could be guilty of war crimes for their involvement with the torture of detainees. But Attorney General Michael Mukasey rejected demands for a special counsel's inquiry into the Bush administration's role in authorizing abusive interrogations.

An ex-EPA official alleged that Vice President Dick Cheney pushed for the deletion of essential passages in congressional testimony by the head of the Centers for Disease Control and Prevention in October 2007. The removed portion concerned the adverse health effects of greenhouse gas emissions.

The Washington Post broke the news this morning that the EPA will not act to regulate greenhouse gas emissions before President Bush leaves office. That ends months of struggle between EPA scientists and the White House over the issue; last month, TheNew York Times reported that in December 2007 the White House had refused to an open an email from the EPA that recommended regulating greenhouse gas emissions.

Earmark abuse made it back onto our Scandal Watch this week when Roll Call reported that House Democrats in the ‘Frontline' program - aimed at bolstering the campaigns of incumbents facing tough elections - had padded a spending bill with earmarks ($) to benefit those lawmakers' districts.  Meanwhile, Taxpayers for Common Sense reported that 25 percent of earmark spending on a Senate Commerce-Justice-Science bill went to just two senators: Sen. Barbara Mikulski (D-MD) and Sen. Richard Shelby (R-AL).

Earmark abuse bumped Warrantless Surveillance off the roster this week after a surveillance bill granting broad spying power to the government and retroactive immunity to telecoms was passed by the Senate and signed into law by President Bush.