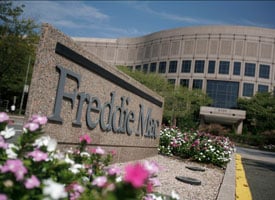 Mounting financial troubles ($) at Fannie Mae and Freddie Mac prompted the Treasury to announce on Sunday its plan to bail out the mortgage giants, which own or guarantee half of all mortgages in the U.S. The move was in part a reaction to the realization that the companies had overstated the amount of capital they had at their disposal. Lawmakers and watchdogs who have urged greater oversight of the companies for years uttered a collective, âI told you so,â and Sen. John Cornyn (R-TX) called for a criminal inquiry.

So who are the winners and the losers of the shake-up? Well, members of Congress and others ($) who invested in Fannie and Freddie will lose, but some clever lawmakers ($) who invested in the companiesâ debt stand to make a buck or two, or at least break even. Many banks are expected to take a hit, as is insurance giant AIG, which holds $600 million in Fannie and Freddie preferred shares. A long-term plan for the companies wonât be hashed out until the next president is in office, but theyâve already been booted off the S&P 500 ($).

Some details of the plan that have been heavily scrutinized are the cushy severance packages for the ex-CEOs and a free tax pass. The companiesâ former roles as major donors and lobbyists in Washington has also been in the spotlight. Some of the largest recipients of Fannie and Freddieâs generosity have been Barack Obama, John McCain and Senator Bob Bennett on the Banking Committee.

In other news, regulators shut Silver State Bank, a Nevada bank, making it the eleventh bank failure this year. And both the Federal Reserve and the Treasury Department have stepped in to help a floundering Lehman Brothers orchestrate its buyout.

On Wednesday, the inspector general at the Interior Department released three wildly detailed and lurid reports outlining myriad ethical violations at the Minerals Management Services, which collects $10 billion annually in royalties from the oil industry.

According to the reports, employees of the royalty-in-kind program have rigged contracts, taken money as oil consultants, had sexual relationships with oil and gas company representatives, and engaged in other misconduct throughout the past few years.

One former employee has already pleaded guilty to a felony conflict-of-interest charge, but two of the highest-ranking officials involved in the wrongdoing will likely avoid prosecution, reports the New York Times. A congressional oversight hearing has been scheduled for next week.

The inappropriate relationship between MMS officials and the oil industry will likely shake up the upcoming congressional debate on offshore oil drilling. Speaker Nancy Pelosi said yesterday that any legislation on offshore oil drilling will include a âvery strong integrity pieceâ to regulate the conduct of MMS employees. Apparently the Interior Secretaryâs pledges of reform didnât inspire much confidence.

The legislature meets today to decide whether to issue subpoenas to Palinâs staff, but the Senior Assistant Attorney General in Palinâs administration has threatened to block them.

Her ex-brother-in-law, meanwhile, denied to the Washington Post that he ever made a death threat against Palinâs father, which Palin alleged in 2005.

In filing a FOIA request for Palinâs secret e-mails that everyone wants to see and Palin has refused to release, an Alaska watchdog uncovered an e-mail Palin wrote in 2002 that may violate a state law prohibiting the use of official e-mail to conduct campaign business, reports Mother Jones.

Perhaps this whole scandal could have been avoided if Palin had simply listened to two prior warnings: one from an Alaska judge to stop disparaging her ex-brother-in-law and the other from a former ethics adviser to apologize ($) in July.

TPMmuckraker has compiled an up-to-date overview of the scandal here.

A thirdscandal for Charlie Rangel landed him on Scandal Watch this week.

Rangel came under fire earlier this month for failing to disclose income from renting his Caribbean villa on either congressional disclosure forms or tax filings. What's more, Rangel hadn't paid interest on the villa's mortgage for 10 years.

This week, Rangel claimed ignorance on the loan terms and called for a third ethics investigation into his financial dealings. He will also file an amended tax return and pay all back taxes.

House Republicans have called for Rangel to step aside as chairman of the tax-writing House Ways and Means Committee until the ethics probes have concluded, but Pelosi and other Dems have rejected those demands.

This week, the judge on Sen. Ted Stevens' (R-AK) case rejected his bid to dismiss the trial and ruled against most of Stevensâ lawyersâ motions.

And prosecutors announced more gifts that Stevens failed to report or had underestimated, including a prized sled dog and stained glass window.