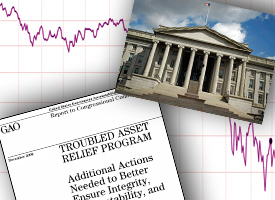 The GAO released a report (PDF) on Tuesday that faulted the Treasury Department on its bailout oversight, pointing to a glut of unfilled staff positions and few assurances that conflicts of interest are being avoided. It was released amid a rising clamor of disapproval from Washington: The head of a congressional panel established to monitor the bailout expressed a lack of confidence in the plan's overarching strategy, which has already shifted several times in its short lifespan. FDIC chief Sheila Bair also said the bailout lacked an "exit strategy." Apparently Timothy Geithner, Obama's pick for Treasury secretary, doesn't take too kindly to criticism: He's reportedly pushing for Bair's removal because she's not a "team player."

Meanwhile, the AP gives us another coulda-shoulda-woulda story about a 2005 push by regulators to crack down on "no-money-down, interest-only mortgages." Alas, the regulations were delayed and watered down after an "aggressive lobbying" campaign.

Citigroup's bailout late last month prompted the usual post-government-rescue analysis of what went wrong, with most seeming to settle on the old Roman Empire problem: It just got too big to handle.

Ex-Treasury secretary and highly paid Citigroup director Robert Rubin also took some flak ($) for helping push Citi into riskier ventures. Some investors are suing Rubin and other Citi execs for allegedly selling $150 million of their own shares while artfully concealing the bankâs precarious financial state.

The New York press is still hot on Rangel's heels. The Post reported that Rangel appears to have abused a Washington, D.C., tax break reserved for primary residents of the district. The Times followed up with a report that Rangel helped protect a Caribbean tax shelter for a company whose chief executive was a top donor to his foundation. Rangel vigorously denied the paper's assertions and even denied knowing about the donation. The Times responded with a detailed account of Rangel's meeting with the donor at the Carlyle Hotel, which Rangel's tax lobbyist had written off as a coincidental encounter.

The New York Times follows up on its April report about the Pentagon's covert campaign to influence the news commentary of retired military officers with an in-depth look at one of them: Barry McCaffrey, a retired four-star Army general, NBC military analyst and consultant to military contractor Defense Solutions. McCaffrey has heaped praise on the company both on air and to Pentagon officials without disclosing that it has paid him to do so, highlighting the troubling ties between the "business of war and the business of covering it."

Finally, the Seattle Times reports that several big defense contractors including Boeing and EADS gave hundreds of thousands of dollars to Rep. Norm Dicks' (D-WA) favorite charities, even naming him as the honoree of the gift. Dicks sits on the powerful defense-appropriations subcommittee, and watchdogs decried the move has a sneaky way to curry favor.