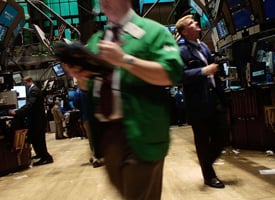 CPAs rejoice! Esoteric accounting rules are finally getting their 15 minutes of fame. Under pressure from lawmakers and banks, the Financial Accounting Standards Board relaxed its mark-to-market rules yesterday, effectively letting banks have a greater say in how they value their toxic assets. (Clusterstock explains the rule change in layman's terms, i.e., with cows instead of securities.) Some financial analysts warn that the move could undermine the Treasury Department's goals, but others think the impact will be modest. Either way, stocks soared.

All right, that's enough rejoicing, accountants: ProPublica reviewed records from a federal oversight board and found that "some of the nation's largest accounting firms failed to properly examine the reserves that banks and other lenders set aside to cover losses."

Meanwhile, government watchdogs testified at a congressional hearing this week that the Treasury is still doing a poor job of providing details about its bailout program. (The Treasury's bailout Web site is a little hazy on the details, too.)

In other bailout news, some banks have begun returning the Treasury's funds, and the Wall Street Journal reports that a tweak to bailout contracts back in October could cost taxpayers billions of dollars. Finally, a former senior official in the Bush Treasury has written an account of the previous administration's efforts to deal with the financial crisis, which he says were hampered by "chronic disorganization."

Former AIG CEO Hank Greenberg, who has been critical of the company's current management and the government's rescue attempts, was the star witness at a House oversight committee hearing yesterday. But the day before the hearing, AIG "launched a pre-emptive strike," issuing a "fact sheet" to reporters that assailed Greenberg's credibility and blamed him for leading the firm into the disastrous credit default swap business, ProPublica reported.

But Greenberg was emphatic in an interview with the Wall Street Journal: the AIG debacle was not his fault. "I don't feel any responsibility at all," he said.

Rep. Jeff Flake (R-AZ) has been pushing for an ethics probe into Rep. John Murtha's (D-PA) ties to PMA Group, a recently shuttered lobbying shop under investigation by the FBI, since February. Now it appears his persistence may pay off: His sixth attempt is gaining traction, having already snagged support from eight Democrats.

Meanwhile, the Center for Public Integrity got its hands on an Excel spreadsheet that was passed around Congress in 2007. The table shows a list of earmarks requested by House members, but it was curiously created by "ken" of "The PMA Group." In the e-mail attached to the document, a congressional staffer wrote: "Don't you just love how Murtha's lobbyists had this list before most people in Congress had it?"

But Murtha was resolutely unapologetic in an interview with the Pittsburgh Post-Gazette. "If I'm corrupt, it's because I take care of my district," he said.