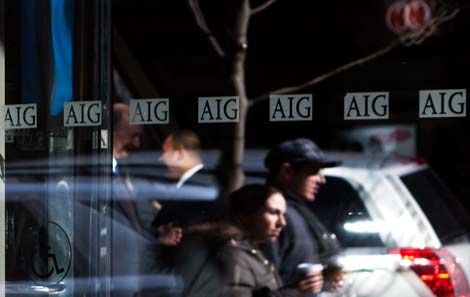 An interesting fact: The $165 million awarded to executives at AIGâs financial products division two weeks ago represents just 0.0014 percent of the $11.6 trillion that the government has committed to combat the credit crisis so far, according to Bloomberg News. Nevertheless, those bonuses caused an uproar last week that ultimately succeeded in wrangling $50 million back from the unitâs top-paid employees. Others arenât so ready to give in to the "bonus assault": One execâs very public resignation in the New York Times, in which he defends the bonuses, earned him a standing ovation from fellow employees. And Congressâ efforts to obliterate those bonuses with taxes seem to have stalled.

Meanwhile, the ringleader of the financial products division, Joseph Cassano, may soon find himself in the crosshairs of a congressional investigation, reports TPMMuckraker. (Rolling Stone offers a very unflattering portrait of his reign over AIGFP.) And New York Attorney General Andrew Cuomo has widened his probe of the bonuses to include the unitâs efforts to unwind its complicated credit default swaps. (Several banks, and their employees, are now reaping a taxpayer-funded windfall from those deals.) Connecticutâs attorney general has also set his sights set on AIG, after discovering that AIGFPâs bonuses actually totaled $50 million more than previously thought.

If the bailout was supposed to induce good behavior from banks, the bloom may be off the rose. Following news of Citigroupâs new $10 million executive suite was an ABC News report that JPMorgan Chase plans to spend $138 million on new corporate jets and a luxury hangar. And even though retention-pay rage has been targeted mainly at AIG, the New York Times reports that at least 19 bailed-out firms plan to dole it out as well.

Meanwhile, some banks are pricing their toxic assets "ridiculously high," and Citigroup and Bank of America are using bailout money to "aggressively" buy even more risky mortgage-backed securities, reports the New York Post. Banks are also scrutinizing the Treasuryâs latest plan to sell those toxic assets to see how they can reap the most profit, even as some experts say the plan will probably fail.

The Treasury finally released its contract with Bank of New York Mellon, but meanwhile, two law firms that that also have contracts with the Treasury to advise it on TARP-related matters have "offered their services to private clients interested in capitalizing on the bailout," reports BailoutSleuth. And lastly, Portfolio reports that $2.5 billion in bailout money went to banks that cater to the rich and actually "had little or no exposure to subprime mortgages or other toxic assets."