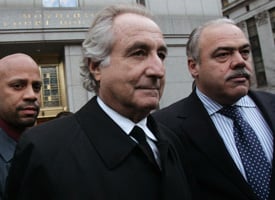 Madoff may lack scruples, but he's chock full of optimism. Right up until his arrest last month, he was still striving to keep his racket going. In November, he ordered a $150 million transfer from his London office. Then, 10 days before his arrest, he wrangled $250 million out of his 95-year-old mentor and millions more from others. When investigators searched his office, they found $173 million in signed checks; Madoff had told his sons he was going to dole out the dregs of the firm's cash to friends, family and staff. And we're still waiting for contrition to kick in: After his arrest, he mailed millions of dollars worth of jewels (and mittens) to friends and family. Prosecutors say that's reason enough to revoke bail and toss him in the slammer. Which raises the question, why wasn't he jailed to begin with?

Meanwhile, Congress is reviewing the SEC's hapless investigations into Madoff. The SEC's former New York bureau chief tried to defend herself to the New York Post, but she may avoid having to do the same to the SEC inspector general. His investigation into the SEC's handling of the Madoff case doesn't have the power to subpoena former officials.

Just this morning, the Illinois House voted to impeach Gov. Rod Blagojevich. Now the vote's headed to the state Senate, which reconvenes next week. A Tuesday AP report on some suspiciously timed meetings doesn't do much to bolster his case.

Back in Washington, Blago's pick for Obama's U.S. Senate seat, Roland Burris, continues his quest to actually get seated. The Senate booted Burris from Capitol Hill Tuesday for not having his credentials in order, but he worked out a deal with Senate Majority Leader Harry Reid (D-NV) and Sen. Dick Durbin (D-IL) on Wednesday. All Burris had to do was get the reluctant Illinois secretary of state to sign his nomination papers, and, as Burris says, "learn where the bathrooms are." But today the state Supreme Court refused to force the secretary of state to do so, effectively tossing the ball back into Harry Reid's court.

Yet another U.S. governor has made his way onto Scandal Watch for suspected pay-to-play dealings. Federal investigators are looking into whether anyone in New Mexico Gov. Bill Richardson's office pressured the state Finance Authority to award contracts to a firm whose president donated to the governor's political committees and re-election campaign. The investigation has derailed Richardson's bid for Commerce secretary, but the governor maintains that his administration "acted properly in all matters."

The investigation is part of a nationwide inquiry into the relationship between states and the companies hired to help them sell municipal bonds, according to the New York Times. Federal agencies and state attorneys general have been looking at whether companies have colluded to sidestep an open bidding process and bilk taxpayers out of an estimated $4 billion per year.