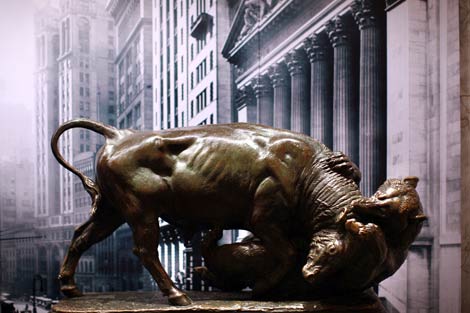 Obama has gotten his hands on the second half of the bailout funds amid complaints that the plan violates the Constitution and effectively nationalizes banks. It’s lucky Congress released those funds, because the Treasury Department had already started promising them out, mostly to Bank of America as part of a secret December deal. Meanwhile, the AP reports that those bailout profits touted by some Republicans are nothing more than an "illusion," and TPMMuckraker notes that the Treasury officials in charge of doling out the bailout funds don’t inspire much confidence.

ProPublica reports that Citigroup took on risk and saw its capital evaporate under the regulatory watch of Timothy Geithner, Obama’s pick for Treasury secretary. Citigroup is now on a self-imposed crash diet. The shrinking bank is spinning off its brokerage firm into a joint venture with Morgan Stanley, but lawmakers wonder if Morgan is using bailout funds to do it.

And finally, Fannie Mae and Freddie Mac’s program to help homeowners avoid foreclosure has an interesting provision quietly tucked in its mountain of requirements for loan modification: Borrowers must waive their legal rights to sue over any "lending abuses concerning their loan," reports the Washington Independent.

Who knew what? That’s the question regulators and federal investigators are asking as they try to peel back the layers of Madoff’s scam. They’re reportedly eyeing Madoff’s brother (who was number two at the firm), the top exec at a Madoff "feeder fund" (who didn’t show up to testify to Massachusetts officials last week), another Madoff middleman, and Madoff’s "street-smart" aide. Meanwhile the New York Times speculates on whether Madoff’s wife knew about the scheme.

Madoff narrowly avoided the slammer this week, and the Times notes that there are signs he’s working on a plea deal.

The term "torture" – long a taboo in the Bush administration – is slowly emerging from its years-long exile. The head of military commissions at Gitmo gave a surprisingly candid interview to the Washington Post in which she admits that the U.S. "tortured" a Gitmo detainee. She added that the "buck stops in the Oval Office." (Just a week before, Vice President Dick Cheney told the Weekly Standard, "I think on the left wing of the Democratic Party there are some people who believe that we really tortured.") Obama’s pick for attorney general also said waterboarding counts as "torture."

The military commissions have long struggled with how to deal with evidence gleaned from abusive interrogations, and just this week they hit two more setbacks: On Wednesday, a judge concluded the government’s case against one detainee was so weak, he ordered the detainee’s release. And a former Gitmo prosecutor said the process for handling evidence there was too chaotic to depend on. ("It was like a stash of documents found in a village in a raid and just put on a plane to the U.S. Not even rudimentary organization by date or name.") Obama reportedly plans to order the closure of Gitmo on day one, but it could take a year to do.