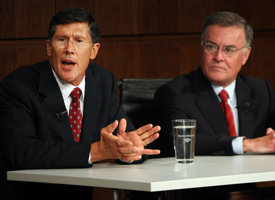 That BofA-Merrill deal is still making waves: BusinessWeek reports that Merrill doled out $565 million in dividends to its shareholders three weeks before they approved the BofA deal, which comes after news that Merrill also fast-tracked $4 billion in employee bonuses before the deal closed. BofA ousted ex-Merrill CEO John Thain last week amid furor over the bonuses and potentially hidden losses. But Thain fought back, saying he had been entirely open with BofA CEO Ken Lewis, and the Financial Times reports that Lewis actually had a hand in Merrill's decision to hand out the hefty bonuses. But that didn't stop New York's attorney general from subpoenaing Thain about the payouts. The newly unemployed Thain is also on the hook for that $1 million office redecoration.

Speaking of bonuses, the New York Times reports that despite Wall Street's worst crisis since the Great Depression, its workers still raked in $18.4 billion in bonuses last year, "the sixth-largest haul on record." Bloomberg News reports that bailed-out AIG is doling out $450 million in "retention pay" to the same employees who basically drove the firm into the ground: the credit-default swaps unit. And AIG isn't the only one keeping the old staff around: The AP reports that at banks receiving bailout bucks, nearly nine out of 10 senior execs who were there since 2006 are still at the helm.

Nobody thought Obama would have an easy time closing Gitmo, but the Washington Post reports that his plan is made even more complicated by case files on many detainees there that are in complete disarray, or missing entirely. Meanwhile, a Gitmo judge in one case is refusing to cooperate with Obama's request to halt all trials there, which will likely result in the U.S. having to drop charges against the defendant. And Frontline profiles several Uighurs – Muslims from China – who were recently released from Gitmo and have settled in Albania.

Bagram Air Base, which makes Gitmo look like the Ritz, is another millstone around Obama's neck. As we reported, a federal judge has demanded to know how many detainees there were captured abroad, far away from any battlefield (and engaged in peaceful activities, lawyers say), but the Pentagon won't let the public know that number.

Congress held a hearing this week to determine why Madoff's massive scam slipped through cracks in the U.S. regulatory structure, during which SEC and Finra officials tried to defend themselves. SEC officials said their office doesn't have enough cash to do their job properly. Meanwhile, the New York Times reports that JPMorgan Chase yanked its cash from Madoff-tied hedge funds last fall because of a lack of transparency, but it didn't alert investors to its suspicions. Investors are now "furious that it protected itself but left them holding notes that the bank itself now says are probably worthless."

Finally, the Wall Street Journal gives the most comprehensive picture yet of Madoff’s secretive money-managing biz.