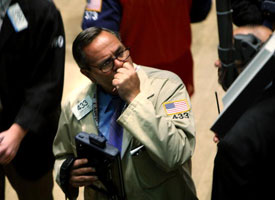 This week Wall Street devolved further into a crisis that has been called the worst since the Great Depression ($). Coming on the tails of last week's bailout of Fannie Mae and Freddie Mac: Lehman declared bankruptcy (the biggest in U.S. history) after the U.S. refused to step in ($); Bank of America bought a foundering Merrill Lynch; and the Federal Reserve bailed out the insurance giant AIG with an $80 billion loan.

The crisis has focused a spotlight on the U.S.'s weak and defective ($) financial regulations and prompted calls for a regulatory overhaul ($). Fannie and Freddie were singled out for having particularly lax oversight and loose regulation. Criticism was also leveled at the lack of transparency on Wall Street, Lehman's relationship with suspect mortgage brokers and its CEO's hubris.

In the meantime, federal regulators took emergency steps to create new rules to meet the current crisis. Over the weekend, the Federal Reserve loosened its rules for making emergency loans to banks. On Thursday, the Fed pumped more funds into global central banks ($) for a total of $247 billion, hoping to spur confidence and greater liquidity. The Treasury has agreed to sell $174 billion in bills next week to raise cash for the Fed ($).

Today, the SEC temporarily banned short selling (the New York attorney general is also probing the practice) and the Treasury announced that it would temporarily guarantee money market funds.

Also today, Treasury Secretary Henry Paulson announced plans for a sweeping plan ($) to address the crisis. He said that the U.S. would buy mortgage assets from troubled banks, and it could cost $1 trillion.

This fast-paced, round-the-clock response to the situation has been largely engineered by just three people: Paulson, Federal Reserve Chairman Ben Bernanke and Timothy Geithner, president of the Federal Reserve Bank of New York. Members of Congress (many of whom are connected to the crisis through donations and investments) were left on the sidelines for much of it.

And the future remains uncertain. The Fed has never before played the role of investor of last resort, and not even the cost of all these bailouts ($) can be accurately estimated.

Two economists put the crisis in plain terms for the New York Times.

Rep. Charles Rangel (D-NY) ran into more trouble this week. After being questioned on profits from the sale of a Florida property that weren't reported on his financial disclosure forms, Rangel announced on Monday that he would hire a forensic accountant to examine his financial records. The New York Post also reported that Rangel was breaking House rules by storing his old Mercedes-Benz in the House parking garage for what congressional aides say has been years.

House Republicans have called for Rangel to step aside as chairman of the House Ways and Means Committee, but this week he refused to do so. He also wrote an open letter to the state of New York, in which he characterizes his troubles as a smear campaign by the Republicans.

Leaders of the House ethics committee said on Thursday that they would likely appoint a special counsel to start investigating Rangel's legal and ethical issues.

Last Friday the Alaska legislature voted to subpoena witnesses in its Troopergate probe, after seven refused to testify. Gov. Sarah Palin's husband was among those subpoenaed, but today he refused to show up. A McCain spokesman has said that Palin, who was not subpoenaed, is not likely to testify either.

The state attorney general, appointed by Palin, said on Tuesday that state employees would refuse to honor the subpoenas, even though two said they would testify over the weekend. The Democratic state senator heading the committee that commissioned the probe accused the attorney general of reneging on a deal to allow some state employees to testify.

The probe also faced opposition this week from a group of five GOP state lawmakers who filed a lawsuit to halt the "McCarthyistic investigation."

The fired commissioner at the heart of the scandal - Walt Monegan - told the Wall Street Journal this week that Palin, her husband and her staff contacted him and his employees repeatedly to suggest that a state trooper - Palin's ex-brother-in-law - should be fired.

Palin said this week that Monegan was fired for being insubordinate on budget issues, but TPMmuckraker reports that she has changed her story on the circumstances surrounding Monegan's ouster several times.

Yesterday, Interior Department officials testified before Congress on three inspector general's reports released last week that detail broad misconduct at the department's Minerals Management Service. Officials said that it was probable that the agency had incurred financial losses, and Interior Secretary Dirk Kempthorne expressed outrage and said he may fire some employees at MMS. Lawmakers had unveiled a bill to reform the department the day before.

The Interior Department also protested the Justice Department's decision not to prosecute two government officials involved in the scandal.

And the GAO released a report that said a flawed accounting system at MMS may have cost taxpayers billions in energy royalties.