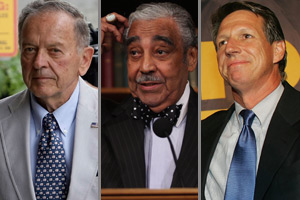 Back in June, we spotlighted the 21 members of the 109th Congress investigated for corruption. Now, as the 110th Congress draws to a close, let's take a look at this year's highest achievers:

The devil on Rangel's shoulder appears to have been whispering directly into reporters' ears this year. According to news reports, Rangel (take a deep breath):

The House ethics committee is investigating most of these allegations, and House Speaker Nancy Pelosi has promised it will finish by early January. There are growing cries for Rangel to step down as chairman from the powerful House Ways and Means committee. But as The Hill puts it, that "gavel will have to be pried from his clenched hand."

Mahoney was elected to Congress on pledges to restore a "safer, more moral" world to constituents rocked by the scandalous downfall of his predecessor, Mark Foley. For Mahoney, that new world apparently included payoffs and gag orders for his mistress.

ABC News reported in October that Mahoney had an extramarital affair, and then, to keep his mistress quiet and avoid a lawsuit, paid her and her lawyer a combined $121,000. He also gave her a taxpayer-funded job and a campaign job from which he later fired her in this brutal phone call. (A highlight: "You work at my pleasure... The only person who matters is guess who? Me.")

As if this weren't enough, she wasn't even Mahoney's only mistress. He allegedly also helped a Florida official with whom he was sleeping obtain a FEMA grant for her county.

Apparently publicly awarding yourself an F-minus on morals isn't the best campaign move: Mahoney lost his re-election bid in November. He also lost his wife, who filed for divorce in October.

(Mistress troubles were in vogue this year: Ex-Sen. John Edwards (D-NC) also admitted to an affair.)

Following his July indictment (PDF) for not disclosing gifts from oil execs (stained-glass windows and sled dogs galore!), Stevens tried everytrickinthebook to stymie the prosecution. Then he seemed to show off that famous Alaska brass with his request to get his conviction overturned. But it turns out he's got a pretty good case!

Two months after Stevens was convicted (and lost his re-election bid and law license to boot), an FBI agent filed a whistleblower complaint about the Justice Department's tactics during the trial. According to the whistleblower, prosecutors withheld evidence from the defense and "schemed to relocate a witness." He also described an "inappropriate relationship" between a government employee and the prosecution's star witness."

The judge who presided over Stevens' trial will hold a hearing on the matter in early January.