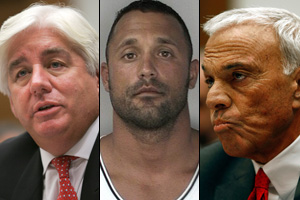 How did billion become the new million? Well, that's the trillion-dollar question. And as the year comes to a close, everyone is looking backwards to figure it out. But in the deluge of financial news this year, many stories are bound to get overlooked. So here are three of this year's forgotten scandals from the subprime mortgage crisis and the subsequent market collapse:

In early June, the Wall Street Journal reported that Countrywide was doling out choice mortgages to V.I.P. customers. Around the office, clients were designated as "FoA" (for "Friends of Angelo") to indicate that Countrywide's CEO, Angelo Mozilo, wanted them to get special deals. The Journal focused on two ex-CEOs at Fannie Mae who were "FoA," but Portfolio reported that Angelo was chock full of "friends." Among them were Sens. Chris Dodd (D-CT) and Kent Conrad (D-ND). Conrad claimed to be unaware of the favoritism, but Dodd admitted knowing that he was part of a V.I.P. program -- he just wasn't aware that any fees were waived. The list of Angelo's friends goes on and on, Portfolio reported, and includes a California judge who once ruled in favor of Countrywide.

So what became of the scandal?

Well, Bank of America bought Countrywide, and many former Countrywide execs finagled jobs with their "friends'" former firm, Fannie Mae. Mozilo is under investigation by the SEC, and his "Friends of Angelo" program is under investigation by the Justice Department. Meanwhile, Sen. Dodd still hasn't turned over his mortgage documents despite his repeated promises to do.

In July, the Miami Herald published an impressive series exposing the rampant mortgage fraud in Florida and pointing the finger squarely at government regulators. State regulators licensed thousands of ex-cons to work as mortgage brokers, granting them access to a nearly endless supply of Social Security numbers, bank accounts and credit cards. The result was $85 million in mortgage fraud.

Criminal loan originators compounded the problem. Loan originators basically do what brokers do, except they aren't licensed or bound by the same rules. Many states require them to obtain a license, but heavy industry lobbying in Florida ensured that they remained unlicensed.

Then, adding insult to injury, regulators ignored multiple warnings about the fraud; brokers and originators fleeced clients over and over again with impunity. Three weeks after the story broke, Florida's top regulator resigned in disgrace; a subsequent state investigation confirmed the paper's findings.

But little seems to have been done. Earlier this month the Herald reported that a key figure in a massive mortgage-fraud ring was still selling mortgages while state regulators turned a blind eye. Federal prosecutors and investigators are now trying to clean up their mess.

AIG is the beast that can't be satisfied -- it has demanded more and more cash ever since the taxpayers lent it $85 billion to stave off collapse in September. That number has now reached $152 billion. In return, AIG has burned through the cash, lobbied against a law designed to crack down on mortgage fraud, spent its dwindling capital on extravagant retreats and executive payouts, and might have hid losses from investors and auditors.

Most of AIG's problems can be blamed on its Financial Products unit, which held $500 billion in mortgage-related credit default swaps last year. Its president is notorious for declaring about those swaps: "It is hard for us with, and without being flippant, to even see a scenario within any kind of realm of reason that would see us losing $1 in any of those transactions."

Those hoping that AIG will be able to stop leaning on its government crutch anytime soon are likely to be disappointed, reports Fortune.