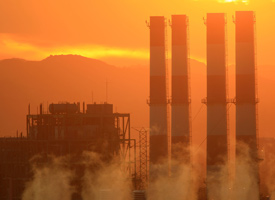 The stimulus bill is supposed to infuse the economy with much-needed cash to combat the economic downturn. But in some cases, the stimulus could present existing government bureaucracies with the opposite problem: too much money.

The Wall Street Journal reported today that at least a few agencies simply don't have the infrastructure or know-how to disseminate funds they've already got, let alone the extra cash expected to be unleashed next week by the stimulus (check out our latest chart).

The Department of Energy is the biggest culprit, according to the Journal. That department would receive a $40 billion stimulus injection -- nearly twice their annual budget. Energy's bureaucracies already grind slowly in the face of tight regulations.

To fulfill the role carved out for the department by their ambitious new allocation, the Energy Department would "dramatically change how it does business…...They are going to need more people, more oversight and more freedom to waive regulations," Karen Harbert, a former department official told the Journal. But even their supposedly cutting-edge programs that attend to the new mission of finding novel energy sources and weaning the country off fossil fuels function like the dated bureaucracy.

For instance, their loan-guarantee program, a two-year-old office that backs companies in the clean or renewable energy business, "has yet to approve a single project," the Journal reports.

Sage Electrochromics, Inc., a Minnesota-based maker of glass that keeps buildings cool by darkening to keep out sunlight, has been chasing a loan guarantee for as long as the program has been operational, along with about a dozen other companies. Sage and some of the other companies report stringent regulations and costly compliance at every corner.

The Department of Energy isn't alone. The Journal found "an obscure Commerce Department office with a $19 million budget and fewer than 20 grant officers [that] could end up in charge of $7 billion in grants to expand internet access in rural areas."

The new administration seems intent on helping the Energy Department transition from its old mission -- of overseeing nuclear weapons development -- to the newer types of projects: President Obama appointed Steven Chu, a Nobel Prize-winning physicist, to lead the Department of Energy and has considered moving some of the department's portfolio to the Department of Defense.

Shortly after his confirmation as Energy secretary, an optimistic Chu told the New York Times that "solving the world's energy and environment problems would require Nobel-level breakthroughs." But in his sprawling department, breakthroughs in accounting may have to come first.

The Department of Energy is considering borrowing employees from other agencies with "a better track record" on distributing grants and contracts, Chu told the Journal.