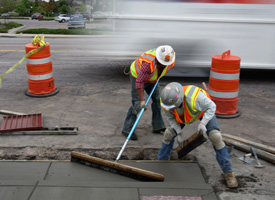 Yes, Virginia, you do have stimulus projects.

After a lengthy, bureaucratic process, Virginia became the last state to secure funds for road and bridge projects under the federal stimulus package, according to U.S. Department of Transportation data.

Wyoming, which has the third-lowest unemployment rate in the country, has gotten approval for 96 percent of its stimulus transportation money. Alaska has made the least progress with just 4 percent of its funding approved. States must use at least half of their money by June 30, or they risk losing it. (See our updated chart tracking transportation spending.)

In other news, the stimulus package had created nearly 7,700 transportation and infrastructure jobs as of April 30, according to a congressional report (PDF) released Thursday. Those are real, breathing people who have gotten a job or been prevented from losing a job, as opposed to the oft-trumpeted 150,000 jobs that the White House estimates will be saved or created. Willie Fort, a Mississippi construction worker and father of four, is one of them: He was about to lose his job when he found work on a stimulus project four hours away in Shreveport, La.

But no jobs have been created in 17 states, including South Carolina, which has the second-highest unemployment rate in the country.

Based on data provided by states and federal agencies, the House Transportation and Infrastructure Committee says that work has begun on 545 projects while another 550 were under contract at the end of last month. The committee also released a list of 5,800 infrastructure projects.

So what are the biggest projects that have received money so far?

3. San Bernardino, CA
$128,116,032
Addition of HOV lane and other lanes to northbound Interstate 215 between Rialto and Massachusetts avenues.

4. Stuart, FL
$127,757,455
Construction of the Indian Street Bridge over the south fork of the St. Lucie River between Mapp Road and Kanner Highway.

5. Miami, FL
$87,569,810
Reconstructing the interchange of the Palmetto and Dolphin expressways.