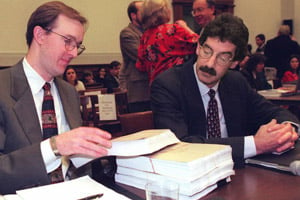 The Obama administration is preparing to announce the nomination of James M. Cole to serve as deputy attorney general, according to two individuals with first-hand knowledge of the appointment.

Cole, a partner at Bryan Cave, is a top white-collar criminal defense attorney in Washington, D.C., and former federal prosecutor who served as deputy of the Justice Department's Public Integrity Division during the Clinton administration. He is also a long-time friend and former colleague of Attorney General Eric Holder.

Cole did not immediately return a phone or e-mail message for comment. Ben LaBolt, a White House spokesman, said: "No decision has been made at this stage." One current Justice Department official and a second former official said Holder and the White House had settled on Cole's nomination in recent days. They spoke on condition of anonymity because the nomination is still confidential and the White House is only now completing the vetting process.

Holder's previous deputy, David Ogden, left the department in February after serving less than a year. Ogden led Obama's transition team for the Justice Department, but officials said he and Holder did not work well together and that Ogden agreed last fall to step down.

In addition to his years in government, Cole, 57, has had a number of high-profile clients, including Edwin Edwards, the former Democratic governor of Louisiana. He has also served as an independent monitor at AIG. The Wall Street Journal reported last year that Cole and his firm were paid more than $20 million by AIG as part of negotiated settlements reached in 2004 and 2006 between the insurance giant, the Justice Department, the SEC and former New York State Attorney General Eliot Spitzer.

Although Cole's oversight role continued into 2009, he did not oversee the credit default swap contracts that led to AIG's near collapse in September 2008.

Cole may be best known in Washington for a yearlong investigation into former Republican House Speaker Newt Gingrich in 1996, when Cole was special counsel to the House ethics committee. Cole's report found that Gingrich had misused tax exempt funds and provided false information to the committee inquiry. The findings led to a stinging rebuke of Gingrich, with House lawmakers voting 395-28 to reprimand the speaker and fine him $300,000.

The No. 2 at the Justice Department manages daily operations. Ogden returned to Wilmer Hale, where he is a partner. Since his departure, the job has been filled on an acting basis by Assistant Attorney General Gary Grindler.

The Washington Post reported in February that Dan Marcus, a law professor from American University, was being considered for the job along with Grindler and two other Justice Department officials.