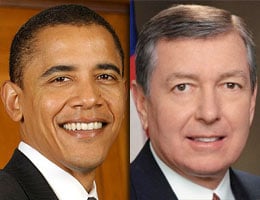 Freedom of information advocates have a lengthy to-do list for President-elect Barack Obama and Congress.

A report (PDF) from a coalition of open records groups lists 69 recommendations for the new administration to increase government transparency.

While the Obama transition team has vowed to run a transparent administration, it has yet to provide details about what they will do immediately – sort of. As we reported earlier this week, the transition team’s Web site, Change.gov, once contained pages describing how it would use technology to provide more information to the public, but the transition team took down the pages to "retool" them.

Perhaps this new report will help with that.

More than 60 groups ranging from environmental groups to librarians to media associations signed on to the report as well as dozens of individuals. The report, coordinated by OMB Watch, outlines how the new president can pull back the veil of secrecy that has shrouded the federal government during the last eight years:

We are rapidly shifting from a society based on the public’s right to know to one premised on the need to know, where the government determines the need.  This represents a fundamental shift in the precepts of our democratic institutions and policies, a shift which President Obama must act immediately to fix.

And by immediately, they mean day one: "The president should clearly state in his inaugural address that he will oversee the 'most open, honest, and accountable government ever' to improve trust in our government."

The report also says Obama should overturn the so-called "Ashcroft memo," which restricted the release of information, and order agencies to make as much information as possible available to the public.

Three other tasks the report says the new president should get done during his first 100 days in office include:

·       Invite the public to identify top documents and databases to make publicly available.

·       The president should rescind Executive Order 13233 to remove impediments to access to historical presidential records.

·       Instruct the Attorney General to advise agencies how to increase the presumption of openness under the Freedom of Information Act consistent with the president’s executive order.

The report also emphasizes the need for oversight – and not just file-an-annual-FOIA-report oversight, but rather oversight with consequences for violating open-government laws:

The president should encourage Congress to establish a criminal penalty for willful concealment or destruction of non-exempt agency records requested under FOIA.

The group recommends that U.S. citizens should be able to get information more quickly and more easily and that the Obama administration should create mechanisms to make that happen.

The Obama transition team also received a list of recommendations from the Sunshine in Government Initiative, a coalition of media groups for open government. Their list is shorter and specifically directed at how the new administration should implement the Freedom of Information Act:

1.     Restore the presumption of disclosure across the executive branch.

4.     Speak on the record, and urge his senior deputies and aides to do the same, in all statements about policy and current news about public matters.