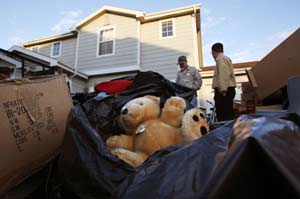 After much anticipation, the Treasury Department today offered the first peek at how the Obama administration’s foreclosure relief plan is going.

The results so far: slow but gradual progress.

Since it launched in early March, the $75 billion Making Home Affordable plan has offered more than 55,000 homeowners lower-cost mortgages, according to Treasury. Loan servicers have contacted about another 300,000 homeowners who are potential candidates for the loan modification program. The administration has boasted that the plan could help up to 4 million homeowners reduce their monthly payments to 31 percent of their gross income.

ProPublica has been tracking the program as well as the struggles of homeowners seeking to benefit from it. Typically, those applying are barely keeping up with payments or are already in foreclosure. (If you’re unsure whether to apply, here is Obama’s eligibility quiz to help.) So far, 14 loan servicers have begun participating in the program.

The Washington Postnoted today that servicers have not implemented the program uniformly, leaving some homeowners stranded in foreclosure.

We’d also note that there is plenty of key information about the program’s effectiveness that Treasury still hasn’t released, or doesn’t have yet. We still don’t know, for instance, how many people applied but were rejected for modifications. It’s also unclear whether the more than 55,000 borrowers who qualify are keeping up with their newly modified loans.

(For those borrowers who don’t qualify or don’t keep up with their modification, Treasury Secretary Tim Geithner announced a plan today to help these people sell their homes for less than they owe, rather than being foreclosed on.)

Loan servicers, meanwhile, are required to hand over to Fannie Mae, the administrator of the modification program, regular reports and documents detailing the modified loan terms as well as the borrower’s progress, or lack thereof.

When will Treasury have this information and be ready to release it? A Treasury spokeswoman we asked didn’t say.

So we filed a Freedom of Information Act request and will fill you in once we hear back.