A federal court in Texas has again ruled the state’s 2011 voter identification law intentionally discriminated against minorities. It’s the latest loss in the case for Texas — which has spent years unsuccessfully defending the law. But it also has implications for the Trump administration.

In February, the new administration abruptly abandoned the crux of the Justice Department’s opposition to the voter ID law. Government lawyers also asked the judge to delay her decision on whether the law intentionally discriminated against blacks and Latinos.

Judge Nelva Ramos Gonzales rejected their request for a delay. And Monday, she ruled that the law “was passed, at least in part, with a discriminatory intent in violation of the Voting Rights Act of 1965.”

When it passed in 2011, Texas’s law had the country’s strictest voter ID provisions. It required one of seven forms of Texas or federally issued IDs to vote and allowed exemptions only for disability or age. It allowed no exception for low income voters.

Civil rights groups have long argued that the law was meant to disenfranchise minority voters, who often lack the ID required. The Obama administration and other plaintiffs brought suit against the bill in 2013. They won in 2014, but Texas appealed. In 2016, a federal appeals court agreed the law had a discriminatory impact, but asked Judge Ramos to reconsider whether legislators had intended for that to be the case.

Last August, Ramos signed off on a compromise to temporarily fix the law ahead of the November election. Voters could sign an affidavit explaining why they didn’t have ID, and then show an alternate form of non-photo ID to cast their ballots. Legislation that essentially locks that compromise in place is now being considered.

Proponents of voter ID argued that the case for intentional discrimination was no longer valid because of the new bill. Lawyers for the Trump Department of Justice echoed that perspective and urged Ramos to delay her decision until the new bill could work its way through the Legislature.

“Regardless of what the record was at the time, the record is clearly evolving,” John Gore, the new deputy assistant attorney general for the DOJ’s Civil Rights Division﻿, told Ramos in a Feb. 28 hearing in Corpus Christi, Texas, which ProPublica attended.

Gore said empathically that the new legislation created “a new legislative mosaic.” He added: “It paints a new picture of Texas’ intent with regard to voter ID.”

Over the course of Gore’s arguments, which lasted only a few minutes, Ramos repeatedly asked him to explain how a bill proposed in 2017 would impact how she should rule on whether a law passed six years prior had been intentionally discriminatory. Gore did not give a direct answer. 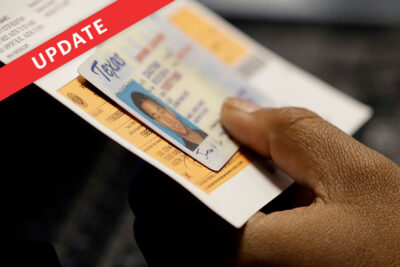 The DOJ, now overseen by Jeff Sessions, is walking back years of effort aimed at limiting the harmful effect of state voter ID measure on minorities.

Ramos dismissed the government’s bid for delay last week, saying she would rule on whether the law was intentionally discriminatory “in due course.” In her ruling issued yesterday, the judge wrote that Texas’ passage and defense of the law “revealed a pattern of conduct unexplainable on non-racial grounds, to suppress minority voting.”

While the state claimed the law was necessary to combat in-person voter fraud, Ramos noted that there is little evidence of such fraud.

The DOJ declined comment on the decision. Texas is likely to appeal the ruling.

Ramos has scheduled a hearing for June to decide on a remedy for the law, which could include putting Texas back under federal voting rights oversight.

The Supreme Court declined to hear the case in January, saying the case had not yet worked its way through the lower courts. But the justices will have an opportunity to consider it again. If they do, said Rick Hasen, an election law expert and professor at the University of California, Irvine’s, law school, “the newly reconstructed five conservative majority could well reverse on all claims.”