This month, the Trump White House unveiled a new policy it had aggressively pushed through the regulatory process that makes it much harder for low-income immigrants, especially those who had used public benefits, to come to or remain in the United States.

The proposal — known as the “public charge” rule, since it creates a complicated test to determine whether an immigrant is “likely to be a public charge” — has the potential to dramatically restrict who’s allowed to settle in the country. And many people who work with immigrants, including social service providers and local and state governments, are worried that it will scare them away from using benefits they and their families need to thrive.

“It’s sloppy drafting. They’re trying to get the regulation out sooner than is probably practical,” said Charles Wheeler, an immigration attorney at the Catholic Legal Immigration Network, Inc.

A spokeswoman for U.S. Citizenship and Immigration Services, the agency that developed and is implementing the rule, declined to comment because of pending litigation against the regulation. (Three lawsuits have been filed challenging the policy: one by a coalition of 13 states and filed in Washington state, one by San Francisco and Santa Clara County in California, and one by a coalition of nonprofit groups in California.) A White House spokesman did not respond to a request for comment.

The regulation’s full text, detailed in 217 pages of three-column text in the Federal Register, contradicts its own implementing language regarding how the new rule will apply to military families. The government estimates it will take 16 to 20 hours just to read the regulation. And the form that’s supposed to implement the rule doesn’t distinguish between families of service members who are citizens and service members who are not citizens — although the form’s instructions do.

“There are so many unknowns at the moment with how this regulation is going to be interpreted and applied for immigrant family members,” Wheeler said. “And certainly that complexity is going to discourage people from even applying for green cards and for benefits.”

The public-charge regulation has been a top priority for the Trump White House, especially senior policy adviser Stephen Miller. For over a year, the White House has been pressuring USCIS to move more quickly to get it out the door.

But the rule’s confusing treatment of military families demonstrates sloppy work. It has created inconsistencies between the rule’s technical text and the forms under development to implement it.

The confusion over military families is one reason many social service providers, local and state governments, and lawyers are concerned that the rule’s impact will be much broader than its intended targets. With so much complexity and uncertainty about who will be treated differently under the new rule and how, they say it’s inevitable that immigrants who aren’t supposed to be targeted under the rule will be scared away from using public benefits to which they’re legally entitled.

Under the new rule, which will go into effect in October barring an injunction in one of the lawsuits, people applying for permanent-resident status are subject to a complicated test of whether they’re likely to become a public charge based on their income, education level, credit scores and other factors. Past use of public benefits counts as a “heavily weighted negative factor” against an immigrant — one that it would be hard for an applicant to overcome.

At one point, the preamble to the regulation says that “active duty servicemembers, including those in the Ready Reserve, and their spouses and children” are exempt from their use of public benefits being counted against them, implying that the exemption applies to all military families. In fact, it does not.

Deepening the confusion, USCIS has a form for applicants that doesn’t reflect the two standards mentioned in the rule. It asks immigrants applying for permanent residence to note, if appropriate, whether they are “the spouse or the child of an individual who is enlisted in the U.S. Armed Forces, or is in active duty or in the Ready Reserve Component of the U.S. Armed Forces.” It does not ask about the citizenship status of the military service member.

So spouses and children of U.S. citizen servicemembers would check “yes” on the question, even though the actual text of the regulation includes no exemption for them.

Immigration lawyers and benefits experts contacted by ProPublica could cite no reason why the regulation would treat immigrants married to U.S. citizens more harshly than immigrants married to noncitizens, and they concluded that the double standard might have been unintentional. Asked why spouses of U.S. citizens might be excluded, Stacy Dean, vice president for food assistance policy at the Center on Budget and Policy Priorities, speculated, “They didn’t think of it?”

“Clearly it’s so complicated that nobody understands it right now,” said Margaret Stock, an immigration lawyer with many military clients. “They’re going to make mistakes. There’s going to be massive amounts of confusion.”

Doug Rand, a former White House official who worked on immigration issues in President Barack Obama’s administration, summed up the contradictory messages around the active-duty exemption: “This is chaos.”

The treatment of military families is especially odd because the Department of Defense (unlike other arms of the federal government, like the Department of Veterans Affairs) took an active role to minimize the rule’s impact on military families. In the Federal Register preamble, USCIS wrote that the DOD worried that the new regulation “may give rise to concerns about servicemembers’ immigration status or the immigration status of servicemembers’ spouses and children ... which would reduce troop readiness and interfere significantly with U.S. armed forces recruitment efforts.” Those concerns would appear to apply equally to immigrants married to citizens, and those married to noncitizens.

A DOD spokeswoman confirmed to ProPublica that the agency was consulted on the regulation, but she declined to comment about the exclusion of spouses and children of U.S. citizens from the active-duty exemption.

It’s not clear what exactly the impact of the double standard would be. In general, the immigrants who are targeted by the public-charge regulation are already legally ineligible for most public benefits. While military service members and their families are exempt from some of these restrictions — like the mandatory five-year waiting period before using any public benefits — military spouses who are unauthorized immigrants, for example, are still legally ineligible to receive most benefits.

The concern raised by immigration lawyers and advocates, however, is that the public charge rule will scare immigrants who aren’t targeted (such as those who already have green cards) out of trying to get benefits to which they are legally entitled, and deter immigrants who are targeted from using benefits that aren’t covered in the rule.

The regulation says, for example, that benefits obtained for children won’t count against their parents. So theoretically, an unauthorized immigrant who is raising a U.S. citizen child alone while their active-duty spouse is deployed can still apply for health insurance and food stamps for the child without damaging their future prospects for a green card. But it’s not at all clear whether military families themselves will get that message — especially because the regulation contradicts itself about their treatment.

The public-charge regulation has been in development for much of President Donald Trump’s tenure, with drafts being circulated and published by the press in February 2018. While the Pentagon fought for exemptions to the policy for active-duty military and their families throughout 2018, the VA several times declined to do the same for veterans, according to emails obtained by ProPublica under a Freedom of Information Act request.

The public comment period for the regulation began in September 2018 and ended in early December.

Over that time, the draft regulation received an unprecedented 266,000 public comments, which the government was legally obligated to read and respond to, in addition to finalizing the text of the regulation itself.

However, the Trump administration, led by Miller, was eager to finalize the regulation as quickly as possible and pressed agencies to complete it. Miller even criticized USCIS director Francis Cissna over his perceived slowness in developing and finalizing the public charge regulation. 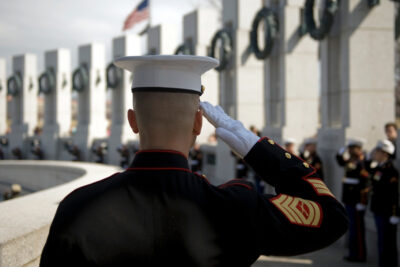 “No Comment”: Emails Show the VA Took No Action to Spare Veterans From a Harsh Trump Immigration Policy

The VA’s approach differs sharply from the Pentagon’s, which won an exemption for active-duty members of the military.

“The timeline on public charge is unacceptable,” Miller wrote to Cissna in June 2018, in an email reported by Politico this month. “This is time we don’t have. I don’t care what you need to do to finish it on time.”

In March 2019, after the comment period ended, Miller yelled at Cissna during a meeting to finalize the rule more quickly, according to an April report from The New York Times. “You ought to be working on this regulation all day every day,” the Times quotes Miller as saying. “It should be the first thought you have when you wake up. And it should be the last thought you have before you go to bed. And sometimes you shouldn’t go to bed.”

As White House officials scrambled to complete the regulation’s initial draft version last year, they made clear to federal agencies that the decision to propose the drastic change to how immigration law is enforced had already been made. Agencies were discouraged from arguing against the central thrust of the policy, according to the emails obtained by ProPublica.

“Please do not worry about non-substantive line edits,” a White House official, whose name is redacted, wrote in bold type, in July 2018 and again in September. “Please recognize, also, that the decision of whether to propose expanding the definition of public charge, broadly, has been made at a very high level and will not be changing.”