President Donald Trump’s inauguration chairman, Tom Barrack, lobbied the new administration to share nuclear power technology with Saudi Arabia while, at the same time, making plans to team up with the Saudis to buy a company that would benefit from the policy change, according to documents obtained by a House committee.

During the campaign, Barrack advised Trump on the Middle East, where he has long-standing business relationships. As Trump clinched the Republican nomination in 2016, Barrack shared a draft of a policy speech with a businessman from the United Arab Emirates, according to text messages quoted in the committee’s report. The businessman then consulted with unspecified others and suggested adding a paragraph praising the powerful princes of Saudi Arabia and the UAE, the text messages show.

Barrack incorporated the suggested language and sent a new draft to campaign chairman Paul Manafort, according to the report. In an email, Barrack seemed to suggest he knew he was entering an ethical or legal gray area: “This is probably as close as I can get without crossing a lot of lines,” he said.

On the day of the speech, Manafort sent Barrack a final draft, saying, “It has the language you want.”

The Democratic staff of the House Oversight Committee said the documents it received — 60,000 pages from various private companies — do not show whether candidate Trump was aware that his speech had been circulated to at least one foreign official. The report also does not indicate why Barrack wanted foreign input on the speech.

But Barrack, a billionaire investor, went on to pursue a lucrative deal based on the Trump administration’s Middle East policy, a policy that he was helping to shape.

Barrack’s plan, according to the documents, was for his firm and other U.S. investors to join with Saudi Arabia and the UAE to buy Westinghouse, the struggling U.S. manufacturer of nuclear reactors. At the same time, Barrack used his access to the White House to urge top officials to give Westinghouse permission to sell as many as 30 nuclear reactors to Saudi Arabia and the UAE.

When Westinghouse went to a different buyer, Barrack sought a $50 million stake, according to the documents. The Trump administration is still considering whether to allow Westinghouse to sell reactors to Saudi Arabia — an idea opposed by nonproliferation experts and lawmakers from both parties who fear the kingdom could repurpose the technology to build a nuclear bomb.

Barrack’s role in the proposed Saudi nuclear deal is now part of a federal investigation into illegal foreign lobbying, The New York Times reported on Sunday. Prosecutors have questioned Barrack in the probe, which arose from special counsel Robert Mueller’s investigation and was referred to the U.S. attorney’s office in Brooklyn, according to the Times.

Barrack’s spokesman said he cooperated with and provided documents to the House committee. “Barrack’s engagement in investment and business development throughout the Middle East for the purpose of better aligned Middle East and U.S. objectives are well known,” the spokesman said in a statement. “Barrack’s consistent attempts to bridge the divide of tolerance and understanding between these two great cultures is etched in the annals of time.”

A spokesman for the U.S. attorney’s office declined to comment.

Federal law requires anyone working to influence U.S. policy on behalf of foreign governments to report their activities to the Justice Department. Manafort, deputy campaign manager Rick Gates and ex-national security adviser Michael Flynn all admitted to violating this law. Barrack did not file any disclosures about his contacts with the Saudis and Emiratis while he was helping to shape Trump’s policies toward the region.

When ProPublica interviewed Barrack in 2017, he acknowledged an interest in investing in Westinghouse, saying, “Westinghouse in bankruptcy today is a business opportunity for lots of people like me.” But the newly released documents reveal that Barrack’s efforts were more serious and advanced than previously known.

“The American people deserve to know the facts about whether the White House is willing to place the potential profits of the president’s personal friends above the national security of the American people and the universal objective of preventing the spread of nuclear weapons,” the committee’s chairman, Rep. Elijah Cummings, Democrat of Maryland, said in a statement on Monday.

The White House didn’t immediately respond to questions. The White House and multiple federal agencies did not cooperate with the committee’s investigation. Trump has spent the past several days tweeting insults at Cummings.

The committee’s Republican staff released its own report last week defending the administration against Democrats’ allegations of wrongdoing.

The Emirati businessman whom Barrack consulted on the campaign speech, Rashid al-Malik, is close to the UAE’s powerful prince and his brother who heads the country’s intelligence services, according to the Times. Al-Malik met with prosecutors in 2018 and then left the country, the Times reported. His lawyer, Bill Coffield, didn’t respond to requests for comment.

During the campaign, Barrack, an Arabic-speaking son of Lebanese immigrants, proposed deepening economic ties through a “Middle East Marshall Plan,” named after the American aid program to postwar Europe. After Trump’s inauguration, Barrack’s “Marshall Plan” turned into an effort to build nuclear reactors in Saudi Arabia, according to the committee’s report.

Barrack discussed the idea with officials, including senior adviser Jared Kushner, chief strategist Steve Bannon, chief of staff Reince Priebus and economic adviser Gary Cohn, according to the committee’s report. In March 2017, Barrack and Gates, who then worked for Barrack’s company, met with the president about the “Trump Middle East Marshall Plan,” according to correspondence obtained by the House committee.

Barrack talked to Trump and Kushner about leading the initiative as a special envoy to the Middle East, according to messages quoted in the report.

“I have been discussing a position with POTUS and Jared which would focus primarily on the commercial and economic aspects of the new economic development plan across the region,” Barrack said in a March 2017 email to the UAE’s ambassador to Washington, Yousef al Otaiba. “Would love to talk to you in depth about it when you have time!” 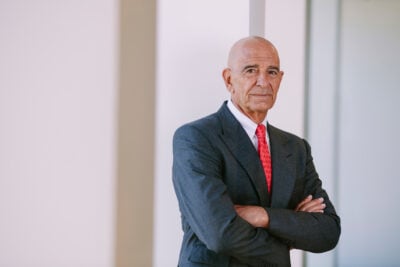 “Why don’t we try to get together with Adel next week, all three of us so we can brainstorm together,” Otaiba replied, referring to Adel al-Jubeir, a top Saudi diplomat. “Adel is a very close friend of mine and we often conspire together.”

The Emirati Embassy didn’t immediately respond to requests for comment.

Had Barrack taken an official position, he would have become subject to federal laws against conflicts of interest. But as the prospect of a diplomatic appointment faded, Barrack positioned himself to profit from the economic strategy he helped shape.

“We should revisit westinghouse issue!” Barrack texted Kushner in May 2017. “Interesting opportunity.”

Barrack approached private equity giants Apollo and Blackstone about joining their bid to buy Westinghouse, according to the report. In a September 2017 memo from Barrack, he said the firms would combine their funds with money from Saudi Arabia and the UAE.

But Westinghouse went with a competing bid, from the Canadian investment firm Brookfield. Barrack contacted Brookfield’s CEO asking to get involved, and Brookfield invited Barrack’s firm to make a $50 million investment, according to a February 2018 slide presentation quoted in the report.

The report does not make clear whether the investment went through. A person familiar with the negotiations, who spoke on the condition of anonymity, said the investment didn’t end up happening.

Saudi Arabia still needs to sign a treaty with the U.S. before it can build nuclear power plants using U.S. technology. But the administration has already given some nuclear companies permission to share sensitive information with the Saudis. Lawmakers are furious that they weren’t notified and that the administration has forged ahead despite the Saudis’ role in the humanitarian crisis in Yemen and the murder of dissident journalist Jamal Khashoggi.

In February 2019, Trump met with representatives from the nuclear industry about the Saudi deal. The White House meeting was organized by a retired general whose company had worked with Barrack to advance the proposal, according to the House committee’s report. The company, IP3, planned a follow-up meeting in March with the national security adviser, John Bolton, but Bolton’s assistant canceled because of “legal and ethical concerns,” according to an email quoted in the report.

The White House meeting unnerved some of the other industry participants, according to emails quoted in the report. One email, sent by an executive who was not identified, called IP3’s proposal “dangerous-sounding” and a “flashing red warning light.” A different executive said, “Most participants are still concerned that IP3 is setting everyone up.” Another called IP3 the “Theranos of the nuclear industry,” referring to the blood-test startup whose founder has been charged with criminal fraud.

Barrack, however, was enthusiastic to throw in with IP3. In a January 2017 email after meeting with IP3 co-founder Robert “Bud” McFarlane (the Reagan national security adviser who pleaded guilty to withholding information from Congress and was later pardoned), Barrack wrote, “Bud I would follow you and your team almost anywhere!”