Update, July 7, 2020: This story has been updated to include a statement from Peter Febo, chief operating officer of Kushner Companies.

Businesses tied to President Donald Trump’s family and associates stand to receive as much as $21 million in government loans designed to shore up payroll expenses for companies struggling amid the coronavirus pandemic, according to federal data released Monday.

There’s no ban on businesses connected to Trump’s orbit receiving money. Democrats added a provision to the CARES Act excluding government officials and their family members from receiving some bailout funds, but not those from the PPP.

The firms sought funding under the Paycheck Protection Program, one of the Trump administration’s sweeping pandemic relief efforts. Created in late March by the CARES Act, it allowed small businesses — generally, those with fewer than 500 employees — to apply for loans of up to $10 million. The loans can be forgiven if used to cover payroll, rent, mortgage interest or utilities.

The program paid out $521 billion to almost 4.9 million companies in an effort to provide relief for small businesses and their workers amid the sudden economic shock brought on by the pandemic. As applications slowed after the initial rush, $132 billion remained unspent, and Congress voted to extend the program.

After resisting releasing the names, the government bowed to pressure from critics and watchdog groups. On Monday, the administration disclosed only those entities that were approved by banks for loans over $150,000. A consortium of news organizations, including ProPublica, has sued the administration under the Freedom of Information Act to release the full list of recipients and loan details.

The program has been criticized for including some loan recipients, particularly large, publicly traded companies, and for favoring wealthier businesses that had existing relationships with banks. In some cases customers could essentially skip the line. Overall, however, many economists praise the PPP for having gotten billions to companies relatively quickly.

The New York Observer, the news website that Kushner ran before entering the White House and is still owned by his brother-in-law’s investment firm, was approved for between $350,000 and $1 million, data shows. A company called Princeton Forrestal LLC that is at least 40% owned by Kushner family members, according to a 2018 securities filing, was approved for $1 million to $2 million. Esplanade Livingston LLC, whose address is the same as that of the Kushner Companies real estate development business, was approved for $350,000 to $1 million. The company’s Chief Operating Officer, Peter Febo, responded, “Several of our hotels have applied for federal loans, in accordance with all guidelines, with a vast majority of funds going to furloughed employees.” The loans to Kushner-related companies were first reported by The Daily Beast.

In addition, up to $2 million was approved for the Joseph Kushner Hebrew Academy, a nonprofit religious school in Livingston, N.J., that’s named for Jared Kushner’s grandfather and supported by the family.

In April, a bank approved a loan of between $150,000 and $350,000 for the Pennsylvania dental practice of Albert Hazzouri, who golfs with Trump and frequents Mar-a-Lago, the president’s private club in Palm Beach, Florida. In 2017, Hazzouri used his access to the president to pass him a policy proposal on club stationery on behalf of the American Dental Association. He addressed the note to Trump “Dear King.”

Hazzouri also leaned on his relationship with Trump in an unsuccessful bid to obtain a dentistry license to expand his business in Florida. Hazzouri didn’t immediately return calls seeking comment Monday.

Firms tied to the president’s children also stand to benefit from the program. A small indoor lettuce farming business applied for funds between $150,000 and $350,000, SBA data show. Trump Jr. had invested in Eden Green Technology, a vertical farming company just south of Dallas, whose co-chair, Gentry Beach, was a Trump campaign fundraiser.

The company has said Trump Jr. played no role in running Eden Green and was brought in during “U.S. friends and family fundraising efforts.” A spokesman, Trevor Moore, said that the company “followed the standard procedure” in applying for the PPP loan and that “receiving it has provided for the preservation of 18 jobs.” It’s not clear how much Trump Jr. invested or whether he’s been paid any dividends since purchasing his shares. Neither Trump Jr. nor a spokesman returned a message seeking comment. 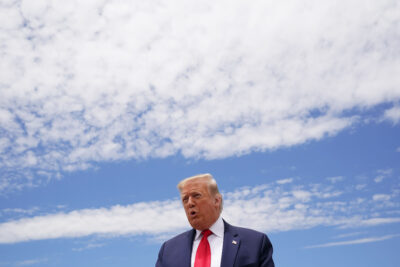 Monday’s list included a Manhattan law firm whose marquee attorney has fiercely defended Trump for almost two decades. Kasowitz Benson Torres LLP — whose managing partner, Marc Kasowitz, was at one point the president’s top lawyer in the special counsel’s Russia investigation — was set to receive between $5 million and $10 million from Citibank, data show. (The largest loan a company could seek was $10 million.)

Once dubbed the “Donald Trump of lawyering” by The New York Times, Kasowitz represented Trump in the Trump University fraud lawsuit. and during the 2016 campaign he helped keep Trump’s 1990 divorce from being unsealed. ProPublica reported three years ago that Kasowitz bragged to friends that he made between $10 million and $30 million per year.

A law firm spokeswoman said its employees have maintained their full salary and benefits thanks to the PPP loan and “substantial cost-saving measures and greatly reduced partner distributions.” The firm has about 400 employees, data show. She said neither Kasowitz nor the firm had any conversations with anyone in the administration about the loan. Other major law firms, such as Boies Schiller Flexner and Wiley Rein, also received loans.

During the last few years, Ryan has accompanied Giuliani on trips to Jerusalem, where the two visited the Hadassah Medical Organization, and to London, where they attended a two-game series between the Boston Red Sox and the New York Yankees. Last September, Giuliani brought Ryan to a state dinner at the White House.

“Mr. Giuliani has nothing to do with the PPP loan,” Ryan wrote in an email to ProPublica. “We applied like any other small business through our bank.”

The loan data released Monday does not reveal the $30 billion in loans that have been canceled. Nor does it provide specific dollar amounts, but instead ranges of loan amounts. Businesses that spend the money according to key provisions of the program, which mainly involve continuing to pay workers, will have the loans forgiven.