The Trump administration has continued pursuing a proposed nuclear power deal with Saudi Arabia despite warnings from ethics lawyers and security experts, according to a congressional oversight committee.

The proposal gained traction in the early days of the administration because of then-national security adviser Michael Flynn and presidential confidant Tom Barrack, who had potential financial stakes in the plan, the House Committee on Oversight and Reform said in initial findings released on Tuesday.

“Further investigation is needed to determine whether the actions being pursued by the Trump Administration are in the national security interest of the United States or, rather, serve those who stand to gain financially as a result of this potential change in U.S. foreign policy,” the oversight committee said in its report on Tuesday.

The committee’s report confirms details in a ProPublica article from November 2017 and cites another article from earlier this month.

The White House premised its Middle East policy on bolstering ties with Saudi Arabia. But Trump’s unwavering support for Crown Prince Mohammad Bin Salman has faced mounting bipartisan criticism amid the murder of dissident journalist Jamal Khashoggi and the humanitarian crisis spawned by the Saudi-led war in Yemen.

The administration’s early efforts threatened to make an end-run around U.S. laws governing the transfer of nuclear power technology, the oversight committee said. The U.S. tightly controls the technology because it can be diverted to build atomic bombs.

The administration has since taken steps to follow the legal process for sharing nuclear power with the Saudis. Just last week, Trump had a meeting with nuclear industry executives convened by one of the organizers of the Saudi proposal.

Should the U.S. and Saudi Arabia reach a deal, Congress would have 90 days to block it through a joint resolution.

The White House didn’t immediately answer a request for comment. Neither did the company that organized the Saudi proposal, IP3.

While Saudi Arabia has a legitimate goal of diversifying its economy away from oil, its leaders have also shown interest in keeping pace with Iran’s nuclear development. “Without a doubt, if Iran developed a nuclear bomb, we will follow suit as soon as possible,” the crown prince, who is known in Washington by his initials MbS, told “60 Minutes” last year.

Back in January 2017, a group of retired American generals, national security officials and energy industry executives wrote MbS a letter, released by the House committee, that proposed sharing nuclear power with Saudi Arabia. They called the project a “21st Century Marshall Plan for the Middle East,” in homage to the American aid program in Europe after World War II.

When the project’s organizers began lobbying the Trump administration, an unnamed senior administration official offered a different description of the plan, according to the committee’s report: “a scheme for these generals to make some money.”

The plan had two key allies: Flynn and Barrack.

Flynn was an adviser to the project from June 2016 to December 2016, according to his financial disclosure form. Once in the White House, Flynn directed an aide to lead the plan, according to whistleblower testimony summarized by the House committee. The aide, Derek Harvey, told staff that Flynn wanted them to include the plan in briefing materials for a call between President Trump and the Saudi king, according to the report. Officials responded that Harvey could not circumvent the legal requirements surrounding the transfer of nuclear technology, but Harvey insisted the decision had already been made during the transition, the report said.

The staff notified the National Security Council’s lawyers, who agreed that Flynn had a conflict of interest and told the staff to cease work on the project, according to the committee’s report. But Harvey continued to work on the project, and after Flynn was fired, the two spoke daily, the report said.

In December 2017, Flynn pleaded guilty to lying to investigators and hiding his Turkish lobbying and agreed to cooperate with Special Counsel Robert Mueller.

A lawyer for Flynn did not immediately respond a request on Tuesday for comment; Harvey did not respond to an e-mail seeking comment.

Barrack, a wealthy investor of Lebanese descent, became a backer of the Saudi nuclear plan because he was encouraging Trump to make a bold economic initiative in the Middle East. “They found an advocate in me in saying I was keen on trying to establish a realignment of U.S. business interests with the Gulf’s business interests,” he told ProPublica in November 2017. Barrack said he discussed joining the administration to lead this initiative but never committed to an official role.

Documents dated January 2017 and released by the House oversight committee on Tuesday suggest that Barrack had agreed to become a “special representative” leading the project across government agencies. The committee also released a memo, written by Barrack and dated March 2017, that proposed, “the president will appoint a special representative for the Trump Middle East Marshall Plan with the diplomatic rank of ambassador or special advisor the President.”

At the same time that Barrack was discussing taking charge of Trump’s Middle East outreach, he was looking for ways to make money off it. According to a February 2017 memo obtained by ProPublica and WNYC, Barrack’s company aimed to take advantage of its access to the White House to get a head start on infrastructure investment opportunities. The memo said the company had “a pipeline of potential projects” and contacts with “several of the key agencies that will direct those efforts.” No rivals, it said, “can currently match the relationships or resources that we possess.”

Almost a quarter of the $7 billion raised by Barrack’s company since Trump won the Republican nomination came from Saudi Arabia or its close ally the United Arab Emirates, The New York Times reported in June 2018, citing an unnamed executive. 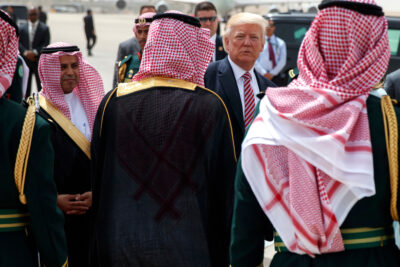 One idea that Barrack considered, as he acknowledged in his interview with ProPublica, was investing in Westinghouse, the sole U.S. manufacturer of large-scale nuclear reactors, which filed for bankruptcy protection in March 2017. A March 2017 letter, released by the House oversight committee, from the organizers of the Saudi nuclear power plan to MbS referenced a “partnership to acquire Westinghouse.”

That same month, then-Deputy National Security Adviser K.T. McFarland told White House staff that Trump had told Barrack he could lead the Middle East Marshall Plan, the committee report said. McFarland noted Barrack’s leadership of the inauguration and longstanding business ties across the Middle East, according to the report, telling staff, “You should all be meeting with Tom.”

A few days later, Barrack had a conference call about the Saudi nuclear plan with Harvey while Rick Gates was in Harvey’s office, according to the report.

Gates was Trump’s deputy campaign manager and worked with Paul Manafort in Ukraine. He worked for Barrack on the inauguration and then joined his company. In February 2018, Gates pleaded guilty to financial fraud and lying to investigators and began cooperating with Mueller.

A spokesman for Barrack said he will cooperate with the congressional investigation.

The House oversight committee, chaired by Elijah Cummings of Maryland, said it will seek additional documents from multiple agencies and private companies involved in the episode.

At last week’s White House meeting with nuclear executives, Saudi Arabia was discussed as a potential new market for reactors, according to Seth Grae, the CEO of nuclear fuel developer Lightbridge, who was present but said he is not involved in the Saudi proposal. Trump seemed supportive of the industry, Grae said, and the group will follow up with suggestions for how the government can help them. Energy Secretary Rick Perry and economic adviser Larry Kudlow were also present, Grae said.