In the past two weeks, we’ve heard a lot about efforts by President Donald Trump and his lawyer, Rudy Giuliani, to push officials in Ukraine to investigate Trump’s opponents. As the news has unfolded, it has introduced us to a litany of unfamiliar characters in both Ukraine and the U.S., many of whom were working with Giuliani or, in some fashion, on behalf of the president.

Our “Trump, Inc.” colleague Ilya Marritz was in Kyiv, Ukraine, last week following the trail of Giuliani in an effort to understand more about these obscure figures who have suddenly become so important. (Yes, Ilya went there. Listen to our episode.)

One thing that became clear during his travels: Giuliani’s “anti-corruption” efforts involved working with men who have their own questionable histories.

We reached out to Giuliani as well as the White House. We have not heard back.

Here is a rundown of key players in Giuliani’s efforts.

The Former Prosecutor Fired for Not Going After Corruption…

Viktor Shokin was Ukraine’s general prosecutor in 2015, a position akin to attorney general. He was responsible for investigating corruption. But according to U.S. officials, NGOs and the International Monetary Fund, he was not actually doing this.

Giuliani has claimed that then-Vice President Joe Biden improperly pushed for Shokin’s removal to avoid an investigation into Biden’s son Hunter, who was on the board of a Ukrainian energy company. There is no evidence that is true.

According to the now-famous whistleblower’s report, Shokin spoke with Giuliani over Skype late last year in a call arranged by two Giuliani associates. (More on them in a moment.)

In response to our questions, Shokin declined comment, explaining that he’s out of the country.

The Former Prosecutor Who Was Not a Lawyer…

Yuriy Lutsenko took over the job of prosecutor general from Shokin in 2016. He got the job after allies in Parliament changed the law to allow the position to be filled by someone without a law degree. Lutsenko has no legal training.

Lutsenko once told a reporter that the U.S. ambassador had given him “a list of people whom we should not prosecute.” He later acknowledged that he was the one who asked for such a list.

Lutsenko has said he’s spoken with Giuliani “maybe 10 times.” In the middle of one meeting in New York last January in which Giuliani and Lutsenko talked about investigating the Bidens, Giuliani reportedly called Trump to loop him in.

In the spring, Lutsenko told a reporter he “would be happy to have a conversation” about Hunter Biden with Attorney General William Barr. Then, last week, he told the Los Angeles Times that he hadn’t found any evidence against the Bidens and said he had told Giuliani that any investigation should be conducted “through prosecutors, not through presidents.”

In response to our questions, Lutsenko denied any wrongdoing. He was fired earlier this year.

The Current Prosecutor Caught on Tape…

Nazar Kholodnytsky is now Ukraine’s top anti-corruption prosecutor. Audio tapes captured Kholodnytsky in unrelated cases coaching a witness to give false testimony and tipping off suspects to police raids. Kholodnytsky acknowledged the tapes were authentic, but said they were taken out of context.

Earlier this year, the U.S.’s then-ambassador to Ukraine called for Kholodnytsky’s firing. She explained, “Nobody who has been recorded coaching suspects on how to avoid corruption charges can be trusted to prosecute those very same cases.” (The ambassador, Marie Yovanovitch, was removed from her position shortly after.)

Kholodnytsky and Giuliani met in Paris in May 2019. Kholodnytsky told The Washington Post the discussion was private, “prosecutor to a former prosecutor.” Kholodnytsky told the Post that he had questions about the Bidens as well as the prosecution of former Trump campaign chair Paul Manafort.

When the Post asked Giuliani about the meeting, he said, “I’m not going to tell you about that.”

Kholodnytsky told us he was too busy to answer our questions.

Lev Parnas and Igor Fruman are two Ukrainian-American businessmen who have worked with Giuliani and introduced him to the Ukrainian prosecutors.

They were arrested on Wednesday for, among other things, allegedly funneling Russian money into U.S. elections. They were picked up at Dulles International Airport, reportedly with one-way tickets to Vienna. Their lawyer has not responded to requests for comment.

On Thursday, Trump told reporters, “I don’t know those gentlemen.” But Parnas and Fruman did have dinner at the White House with the president in May. Here’s a photo Parnas posted of the evening. (BuzzFeed and the Organized Crime and Corruption Reporting Project found it.)

Weeks later, Parnas and Fruman gave $325,000 to a pro-Trump political group. Prosecutors allege the two disguised the source of that money. The Campaign Legal Center first flagged the donation and filed a complaint with the Federal Election Commission last year.

Parnas and Fruman helped Giuliani’s Ukraine efforts in a variety of ways. For example, the two went to Ukraine after Giuliani canceled a trip in the wake of a New York Times article that revealed his travel plans.

In a detailed story about their work with Giuliani, Parnas told BuzzFeed they did nothing wrong. “All we were doing was passing along information,” Parnas said. He added, “We’re American citizens, we love our country, we love our president.”

Parnas and Fruman have colorful backgrounds. Parnas was sued for allegedly defrauding investors in a movie he was involved with, “Anatomy of an Assassin.”

“He conned us from day one,” one of the investors told the Miami Herald, adding, “He financially ruined us.” Parnas lost the case but has denied wrongdoing. “The truth is going to come out about that judgment,” he has said.

Fruman is well-connected in Ukraine, where he owns a number of businesses, including Mafia Rave, a beach club in Odessa.

Giuliani has been subpoenaed by Congress regarding his communications with Parnas and Fruman.

Parnas and Fruman did not respond to our earlier requests for comment. 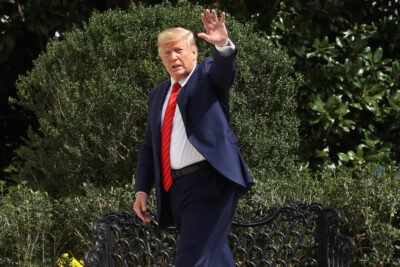 Trump’s Ukraine Plotting Has Been Happening in Plain Sight. So Why Didn’t We See It?

It’s not just that there’s a lot to pay attention to.

Update, Oct. 11, 2019: This story has been updated with more detail about Lev Parnas and Igor Fruman, two associates of Rudy Giuliani, who were arrested this week for allegedly funneling Russian money into U.S. elections.