In the wake of President Trump’s move to push aside the official who was supposed to lead the coronavirus bailout watchdog group, four other members are just as vulnerable.

Trump was able to remove the panel’s chosen head, Glenn Fine, by naming a new Defense Department inspector general and bumping Fine to the No. 2 job at the Pentagon watchdog office. No longer an acting inspector general, Fine was disqualified from serving on the panel he was supposed to lead.

Fine’s removal sounded an alarm among Democrats in Congress, who had demanded that spending safeguards be built into the $2 trillion recovery package. House Democrats rushed out a proposed tweak that would stop further removals like Fine’s by opening up eligibility to senior officials in IG offices, not just IGs themselves.

“We must not allow President Trump to openly flout the oversight measures that Congress put in place,” Oversight Committee Chairwoman Carolyn Maloney, along with Reps. Gerald Connolly and Stephen Lynch, said in a statement on Wednesday. “There are literally trillions of taxpayer dollars at stake, and Americans across the political spectrum want those funds to be spent without waste, fraud, abuse, or profiteering.”

The four other members of the Pandemic Response Accountability Committee who serve in an acting capacity are Mitchell Behm at the Department of Transportation, Sandra Bruce at Education, Richard Delmar at Treasury and Christi Grimm at Health and Human Services. That means they could also be removed by being replaced, just as Fine was.

Spokespeople for Fine and Michael Horowitz, the Justice Department IG who chairs the council of counterparts across the government, declined to comment.

Grimm, in particular, has faced attacks from Trump this week after she released a report on Monday finding “severe” and “widespread” shortages of medical supplies. “Another Fake Dossier!” he tweeted on Tuesday. Grimm’s office declined to comment, and the White House didn’t respond to requests for comment.

Last Friday, Trump nominated a new Education IG who would replace Bruce if confirmed. The nominee, Andrew De Mello, is a tax attorney at the Justice Department who has been detailed to the Homeland Security watchdog office since 2019. Bruce is a career employee who would return to being the Education Department’s deputy IG, a spokeswoman said.

The PRAC was added to the stimulus package at the insistence of Democrats, with language drafted by Maloney along with Sens. Ron Johnson, R-Wis., and Gary Peters, D-Mich., the chairman and ranking member of the Homeland Security and Governmental Affairs Committee. In rushing to finish the stimulus bill, lawmakers modeled the PRAC after a similar oversight body in the 2009 stimulus bill, known as the Recovery Accountability and Transparency Board.

“At the time the language was being drafted, I don’t think anybody had in mind that the president a week later was going to go on a firing spree of IGs,” said Elizabeth Hempowicz, the director of public policy at the Project on Government Oversight, who consulted with lawmakers on the PRAC language. “It was drafted quickly and meant to be immediately responsive to the moment.”

Congress sought to draw on the powers of inspectors general at various federal agencies. The IGs offer established expertise and credibility, as well as sweeping authority within their various agencies to pull records and interview officials. Lawmakers gave the PRAC added powers such as the ability to hold hearings and subpoena private citizens and companies.

When Trump signed the law, he included a statement objecting to several oversight provisions, such as requiring Horowitz to consult Congress on picking PRAC staff and empowering the special inspector general within the Treasury Department to tell Congress about any stonewalling.

Then, last Friday, Trump fired the IG for the intelligence community, Michael Atkinson, who had handled the whistleblower complaint that eventually led to Trump’s impeachment. Atkinson said the firing was retaliation for doing his job.

Eight senators led by Chuck Grassley, R-Iowa, said Trump failed to give a sufficient explanation for firing Atkinson as required by law and “appears to have circumvented Congress’s role” by replacing him without 30 days notice. “Congress intended that inspectors general only be removed when there is clear evidence of wrongdoing or failure to perform the duties of the office, and not for reasons unrelated to their performance, to help preserve IG independence,” the senators wrote in a letter Wednesday. 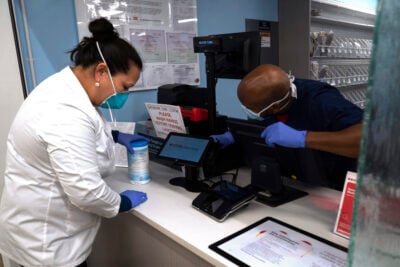 Even though IGs are political appointees, they typically serve across administrations and have an entrenched tradition of independence and nonpartisanship.

“IGs are not supposed to be anything other than independent,” said Earl Devaney, a former IG at the Interior Department and former chairman of the Recovery Accountability and Transparency Board. “Legislation would be better used to firm up the notion that the president just can’t on a whim get rid of somebody.”

Devaney said the flaw was not with the PRAC’s design but with the president’s behavior. “I don’t think this is healthy with anybody,” he said. “Sitting IGs are horribly upset by this.”

Protecting IGs from at-will firing passed the House as part of a 2008 reform bill but wasn’t included in the final version. Some lawmakers have constitutional concerns, opting instead for the notice requirement that Grassley and his colleagues cited.

“Even though there has been this vulnerability, we haven’t seen a president taking advantage of it in the way we’re seeing right now with President Trump,” Hempowicz said. “I’m not sure if there’s anything Congress could have done short of enacting for-cause removal for inspectors general.”