Update, Nov. 9, 2017: Responses from Kris Kobach and Andrew Kossack, co-chair and executive director, respectively, of the voter fraud commission, have been added.

Update, Nov. 16, 2017: New developments that occurred after this article was published have been added.

A Democratic member of the Presidential Advisory Commission on Election Integrity filed suit against the commission in federal court in Washington, D.C. on Thursday morning, alleging that its Republican leadership has intentionally excluded him from deliberations and violated federal transparency laws. The commission has been sued more times (eight, including the new filing) than it has officially convened for meetings (two times).

The suit, filed by Maine Secretary of State Matthew Dunlap, accuses the commission of violating the Federal Advisory Commission Act, which, among other things, requires that advisory committees be bipartisan and sets transparency requirements for them. “Everything we are doing is absolutely perpendicular to that,” Dunlap charged in an interview. “We aren’t inviting the public to participate. We aren’t transparent. And we aren’t even working together at all. My real fear is that this commission will offer policy recommendations that have not been properly vetted by all of the commissioners.”

The complaint contends Dunlap “has been, and continues to be, blocked from receiving Commission documents necessary to carry out his responsibilities” despite repeated requests to be included. It asserts that Dunlap is moving forward with the lawsuit “reluctantly” in order to prevent the commission from “becoming exactly the kind of one-sided, partisan undertaking the Federal Advisory Committee Act was designed to prohibit.”

The commission shouldn’t be surprised by the suit, said Austin Evers, executive director of American Oversight, an advocacy group that is representing Dunlap in the suit. Dunlap has written to the commission multiple times, asking them to address his grievances. “We think the commission is on more than enough notice they are not living up to their obligations,” Evers said, adding that he hopes to avoid a protracted legal battle.

In a statement, a spokesperson for Kris Kobach, the commission’s co-chair and the Republican secretary of state for Kansas, called Dunlap’s lawsuit “baseless and paranoid.” The statement asserted that the commission’s work has been “stalled” by lawsuits, the arrest of a staff member on child pornography charges, and the death of one commissioner. "It is not at all surprising that Commission staff were very busy during this period,” the statement noted "Ironically, Dunlap's lawsuit is only going to increase the workload faced by Commission staff and Department of Justice Attorneys."

Kobach’s statement addressed just a small number of Dunlap’s allegations. For example, it asserted that it was “incorrect” that Kobach excluded Dunlap from communications “between September 12 and October 17”; the bulk of Dunlap’s complaints predate that period. For example, email records filed with a federal court by the Department of Justice show Kobach repeatedly discussed commission business in June with a handful of people without including other commissioners. Most notably, Kobach drafted a controversial letter to states requesting publicly available voter rolls with input from Hans von Spakovsky and J. Christian Adams, two Republicans who only joined the commission afterwards. Those discussions didn’t include other commissioners.

Dunlap asserted that the remainder of the commission was made aware of Kobach’s intent to send the letter only hours before states received copies. The suit claims this “deprived Secretary Dunlap of the opportunity to consult with other members of the Commission or to formulate and express his views as to the legality or propriety of this action.”

Dunlap asked Andrew Kossack, the executive director of the commission, for copies of this and other correspondence in a letter on Oct. 17 and again in a follow-up email on Nov. 1. Dunlap asserted that he has not been provided anything in response.

In a statement, Kossack said Dunlap’s lawsuit “has no merit and we look forward to refuting it in court.” He said he was “disappointed that Mr. Dunlap has chosen conflict over working cooperatively in a bipartisan manner to achieve the important goals of this commission.” He did not respond when asked why he had not given Dunlap the documents he’d asked for prior to filing the suit.

Among the other claims in the suit are contentions that the commission’s record-retention practices are lax and its use of personal email accounts presents data security risks. 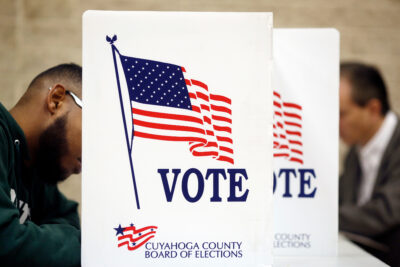 The suit also claims the commission has not communicated with Dunlap since it last met in mid-September, including about plans for any future meetings. However, other commissioners and even outside groups have spoken publicly about such plans. On Oct. 19, for example, the conservative Minnesota Voters Alliance announced in a fundraising email that it had been “invited to speak at the December 2017 meeting of the ‘Presidential Advisory Commission on Election Integrity.’”

Dunlap, who said he was unaware of any such meeting, emailed Kossack on Oct. 25 to ask who had invited the group. Kossack, whose job is to run the commission’s operations, stated that he didn’t know. “I have never communicated with this group, and no meeting is scheduled for December,” he wrote in an Oct. 27 email to Dunlap, a copy of which was provided to ProPublica. Said Dunlap: “If the executive director of this commission doesn’t know what his commissioners are planning, that’s a sign of bigger problems. I think that really means we’ve gone off the rails.” (The Minnesota Voters Alliance has not responded to questions from ProPublica.)

Finally, Dunlap’s suit claims the commission’s purported bipartisanship is just “a facade,” a contention Dunlap has repeatedly made since the release of a now notorious email penned by von Spakovsky in February. “There isn’t a single Democratic official that will do anything other than obstruct any investigation of voter fraud,” von Spakovsky wrote, adding that if Democrats or “mainstream Republicans” were named to the commission, it would be an “abject failure.”

In a recent interview with The Hill, von Spakovsky defended the email, asserting it was part of a “private conversation.” He also stated that he believes he is getting along with the Democrats on the commission. “So far, at least, it seems like we’ve worked well together,” he said.

Countered Dunlap: “I just laughed when I read that. We aren’t working together at all.”

Update: On Nov. 16, lawyers for the Department of Justice sent a letter to Dunlap’s attorneys, denying that Dunlap has been shut out of the work of the voter fraud commission. The letter acknowledged that Dunlap was excluded from some emails, but asserted that none of them constituted “material used by the commission during the course of its deliberations” and therefore they didn’t need to be shared with Dunlap. The DOJ letter asserted that the commission “would be happy to work” with Dunlap to ensure he does not feel excluded, adding that there is “no particular urgency to resolving these issues” because no future meetings have been scheduled.

Shortly after, Dunlap’s attorneys filed a motion for a preliminary injunction to force the commission to hand over the documents Dunlap requested more than a month ago and demanded he be allowed full participation in the commission. Austin Evers, the executive director of American Oversight, Dunlap’s co-counsel in the suit, said the DOJ’s letter was more evidence it has a “fundamentally different interpretation of their obligations under the law.” The letter, he pointed out, offered no explanation for why the DOJ believes communications between the commission’s three most conservative members in the process of formulating its most consequential action — a controversial letter requesting vast quantities of voter data from states — was not relevant to the work of the commission. The DOJ’s letter also indicated the commission's staff would inform Dunlap of the timing of the meetings but, Evers noted, offered him no ability to influence the meetings’ timing or agenda. “They are treating him like an attendee,” he said, “not a commissioner.”