The USDA’s research section studies everything from climate change to nutrition. Under the 2008 Farm Bill, its leader is supposed to serve as the agency’s “chief scientist” and be chosen “from among distinguished scientists with specialized or significant experience in agricultural research, education, and economics.”

But Sam Clovis — who, according to sources with knowledge of the appointment and members of the agriculture trade press, is President Trump’s pick to oversee the section — appears to have no such credentials.

Clovis has never taken a graduate course in science and is openly skeptical of climate change. While he has a doctorate in public administration and was a tenured professor of business and public policy at Morningside College for 10 years, he has published almost no academic work.

Clovis is better known for hosting a conservative talk radio show in his native Iowa and, after mounting an unsuccessful run for Senate in 2014, becoming a fiery pro-Trump advocate on television.

Clovis advised Trump on agricultural issues during his presidential campaign and is currently the senior White House advisor within the USDA, a position described by the Washington Post as “Trump’s eyes and ears” at the agency.

Clovis was also responsible for recruiting Carter Page, whose ties to Russia have become the subject of intense speculation and scrutiny, as a Trump foreign policy advisor.

Neither Clovis, nor the USDA, nor the White House responded to questions about Clovis’ nomination to be the USDA’s undersecretary for research, education and economics.

Catherine Woteki, who served as undersecretary for research, education and economics in the Obama Administration, compared the move to appointing someone without a medical background to lead the National Institutes of Health. The USDA post includes overseeing scientific integrity within the agency.

“This position is the chief scientist of the department of agriculture. It should be a person who evaluates the scientific body of evidence and moves appropriately from there,” she said in an interview.

Woteki holds a PhD in human nutrition, and served as the first undersecretary for food safety at the USDA during the Clinton Administration. She was then the dean of the school of agriculture at Iowa State University before becoming the global director of scientific affairs for Mars, Inc.

Clovis’ published works do not appear to include any scientific papers. His 2006 dissertation concerned federalism and homeland security preparation, and a search for academic research published by Clovis turned up a handful of journal articles, all related to national security and terrorism.

As undersecretary for research, education and economics, Woteki directed additional resources to helping local farmers and agricultural workers address the impacts of severe drought, flooding and unpredictable weather patterns. She chaired the “Global Research Alliance to Reduce Agricultural Greenhouse Gasses,” which brings together chief agricultural scientists from across the globe. Under her leadership, the USDA also created “Climate Hubs” across the country to help localized solutions for adapting to climate change.

Clovis has repeatedly expressed skepticism over climate science, and has called efforts to address climate change “simply a mechanism for transferring wealth from one group of people to another.” He has indicated the Trump administration will take a starkly different approach at the USDA. Representing the campaign at the Farm Foundation Forum in October, Clovis told E&E News that Trump’s agriculture policy would focus on boosting trade and lessening regulation and not the impact of climate change.

“I think our position is very clearly [that] Mr. Trump is a skeptic on climate change, and we need more science,” he said. “Once we get more science, we are going to make decisions.”

The USDA’s undersecretary for research, education and economics has historically consulted on a wide range of scientific issues. Woteki, for example, said she was asked for input on the Zika and Ebola outbreaks because of the USDA’s relevant research and was frequently called upon to offer guidance on homeland security issues related to food safety.

“Access to safe food and clean air and water is absolutely fundamental to personal security,” she said, adding that a scientific understanding of food safety is critical to success in the job. “Food systems are widely recognized by the national security community as being part of critical infrastructure.”

Clovis’ academic background includes years of study on homeland security, but focused almost exclusively on foreign policy. A biography he provided to the 2016 Fiscal Summit at which he was a speaker indicates he is “a federalism scholar” and “an expert on homeland security issues,” with “regional expertise in Europe, the former Soviet Union, and the Middle East.” Neither this biography nor any other publicly available biographies list any experience in food safety, agriculture or nutrition. 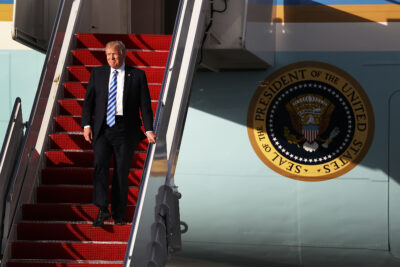 In one case, an official working on energy regulation recently lobbied for oil and coal companies — but the White House won't say whether he received an ethics waiver.

Clovis first became well-known in Iowa through his radio show, “Impact with Sam Clovis.” He finished a distant second in the 2014 Republican Primary for an Iowa Senate seat ultimately won by Joni Ernst. During the race, his outlandish statements often made headlines. In one instance, he said the only reason President Obama hadn’t yet been impeached was because of his race.

While he initially signed on as former Texas Gov. Rick Perry’s top Iowa advisor, he left in August 2015 to become the Trump campaign’s national co-chair and chief policy advisor. Emails leaked by the Perry campaign to the Des Moines Register show Clovis slamming Trump in the months before, questioning his faith. “His comments reveal no foundation in Christ, which is a big deal,” Clovis wrote. He also praised Perry for calling Trump a “cancer on conservatism.”

Still, Clovis subsequently became one of Trump’s best-known advocates on cable television, where he relentlessly defended his new boss. On Morning Joe, he said Democratic presidential nominee Hillary Clinton had failed to “control the sexual predation that went on in her own home.” On SiriusXM, he said Republicans who were abandoning Trump were “weak kneed” and “lily livered.”

Trump’s call for a “total and complete shutdown” of entry of Muslims into the United States in December 2015 put Clovis’ job as a tenured professor at risk.

“If he played a role in drafting or advising the Trump campaign on this issue, we will be outraged and extremely disappointed in Dr. Clovis,” Morningside College spokesman Rick Wollman told Iowa Starting Line, before pledging to look “more closely” at the issue.

Clovis went on unpaid leave from the college in the summer of 2015 and resigned after Trump’s win in November.

Do you have information about this case or other Trump administration appointees? Contact Jessica Huseman at [email protected] or via Signal at 972-268-1882.

Correction, May 13, 2017: This piece originally indicated the Global Research Alliance to Reduce Agricultural Greenhouse Gases was part of the G20. It is a separate effort.

Correction, May 17, 2017: We originally identified the university Clovis received his MBA from as Golden State University — it was Golden Gate University.