President Donald Trump’s acting director of national intelligence, Richard Grenell, worked as a paid publicist for a foundation funded by Hungary’s increasingly authoritarian government — his second former client to prompt scrutiny because Grenell did not disclose the work.

In 2016, the Magyar Foundation of North America paid Grenell’s consulting firm, Capitol Media Partners, $103,750 for “public relations” services, according to the foundation’s tax filing. The foundation was funded and supervised by Hungary’s government, according to records obtained by the Hungarian nonprofit news organization Atlatszo. The foundation’s director, Jo Anne Barnhart, had been a registered lobbyist for Prime Minister Viktor Orban.

Grenell, however, did not register, even though public relations work on behalf of a foreign government falls squarely under the Foreign Agents Registration Act, according to lawyers specializing in the matter. FARA is the same law that Trump’s former campaign manager, Paul Manafort, and former deputy campaign manager, Rick Gates, were convicted of violating.

The work for Hungary is Grenell’s second foreign consulting engagement that was not previously disclosed. On Friday ProPublica reported that Grenell did consulting work on behalf of the Moldovan politician Vladimir Plahotniuc, who the U.S. later said was involved in corruption. Craig Engle, a lawyer for Grenell, said Grenell did not have to register under FARA because “he was not working at the direction of a foreign power.”

The White House and the Office of the Director of National Intelligence did not respond to requests for comment.

Grenell’s past work for Hungary was first reported on the blog of the Quincy Institute for Responsible Statecraft, a foreign policy think tank whose funders include conservative billionaire Charles Koch and liberal financier George Soros. In emails published in the blog post, Engle said Grenell knew that the Hungarian government was the “sponsor” of the foundation. He said Grenell’s work didn’t “qualify as registerable activity” under FARA but did not explain. Engle, whose practice at the firm Arent Fox includes FARA compliance, was also a board member of the foundation and served as its lawyer.

Reached on his cellphone on Monday, Engle said he couldn’t talk because he was at a luncheon. He later replied in an email: “I am not doing any more work on this issue.”

Both Plahotniuc and Orban were clients of the Republican political operative Arthur Finkelstein, who died in 2017. A payment of at least $5,000 from Finkelstein’s firm appears on Grenell’s personal financial disclosure from when he became ambassador to Germany. The form does not list a payment from the Magyar Foundation. 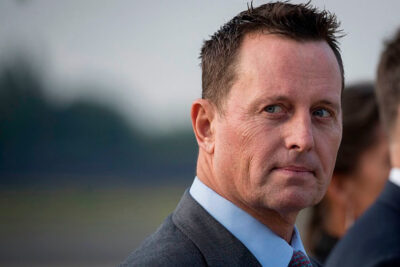 Richard Grenell did not disclose payments for advocacy work on behalf of a Moldovan politician whom the U.S. later accused of corruption. His own office’s policy says that could leave him vulnerable to blackmail.

But the foundation’s tax filing shows the payment to Grenell’s firm. The listed address was a Palm Springs, California, house that Grenell owned at the time, according to property records.

Grenell’s work, according to Engle, consisted of enlisting reporters to attend cultural and academic events. A progress report that the foundation sent to the government said Grenell’s firm was part of a communications team that contacted more than 50 news outlets to promote an event at the National Press Club in Washington. The event was emceed by Connie Mack, a former congressman who was Orban’s registered lobbyist in Washington, and was attended by several lawmakers and government officials.

Undisclosed foreign lobbying and past foreign business dealings can create security concerns for people with access to government secrets, according to the official policy from the office that Grenell now leads.

Watchdog groups have criticized Orban and his far-right party for consolidating power, suppressing opposition, stoking anti-Semitism and cozying up to Russia.

Trump, however, has lavished praise on Orban. “Probably, like me, a little bit controversial,” Trump said at an Oval Office meeting last May, “but that’s OK.”

Grenell, for his part, has advocated bolstering conservatives across Europe. “I absolutely want to empower other conservatives throughout Europe,” he told Breitbart London in 2018. “I think there is a groundswell of conservative policies that are taking hold because of the failed policies of the left.”

Do you have access to information about Richard Grenell that should be public? Email Isaac at [email protected]. Here’s how to send tips and documents to ProPublica securely.