President Donald Trump long ago announced his provocative intentions for the Environmental Protection Agency, pledging during the campaign to get rid of the agency “in almost every form,” with only “little tidbits left.”

So far, Trump’s remodeling efforts have been both dramatic (nominating Oklahoma attorney general and fossil-fuel ally Scott Pruitt to head the agency) and quietly tactical (freezing all EPA contracts and grants).

On Tuesday, the new administration’s efforts to take hold of the EPA continued, this time with a memo from EPA headquarters requiring all regional offices to submit a list of “all external meetings or presentations by employees planned through February 17.” The memo demanded the offices provide a short description of each event and a note explaining “whether it is controversial and why.”

The memo was shared with ProPublica by an employee in an EPA regional office and verified by another EPA employee at headquarters in Washington, D.C.

In an interview with NPR Tuesday, Doug Ericksen, a conservative Republican Washington state legislator who is serving as EPA’s communications director during the transition, said that an internal vetting process will be undertaken before agency staffers share their work with the public.

“We’ll take a look at what’s happening so that the voice coming from the EPA is one that’s going to reflect the new administration,” he told NPR.

The week had begun with employees in communications roles at the EPA telling ProPublica and others they expected the climate change section on the agency’s web site would be taken down.

Uncertainty about the fate of some agency information on greenhouse gases is not only upsetting scientists and some within the EPA, but it also has prompted associations of natural gas companies and utilities that rely on EPA data on greenhouse gas emissions to take precautions. Politico Pro on Wednesday published excerpts from emails circulated to members of the American Gas Association and Edison Electric Institute recommending that members not rely on agency archives. A gas-industry official confirmed the details in an interview with ProPublica.

At EPA headquarters, the mood remains dark. A longtime career communications employee said in a phone interview Tuesday that more than a few friends were “coming to work in tears” each morning as they grappled with balancing the practical need to keep their jobs with their concerns for the issues they work on.

To be sure, the EPA is an agency where information has been tightly controlled for many years, including under the Obama administration, which was harshly criticized by the Society of Environmental Journalists in 2013 for having “taken secrecy to a new level.”

The EPA’s sheer size, with 10 regions and more than 14,000 employees, guarantees some level of confusion, as well. From headquarters through the regional offices, employees said they still hadn’t confirmed if a freeze on work under hundreds of existing contracts, described in a headquarters memo acquired on Monday by ProPublica, applied to vital actions like responding to spills.

Reached by phone in an EPA western regional office Tuesday, a longtime EPA career employee who works on emergency responses, said that, despite the signals from Washington, “We’re not shutting down operations.”

Over the weekend, his office responded to an emergency involving dead wildlife. “We will continue to respond to emergencies until we’re told not to,” he said. 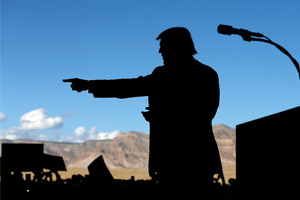 An EPA spokesperson earlier this week said the freeze, and an attendant review of the contracts and grants, could be concluded as early as Jan. 27.

Myron Ebell, who ran the transition at the EPA but has returned to directing environment and energy policy for the Competitive Enterprise Institute, said the purpose of the review was straightforward.

“The idea is, let’s make sure there aren’t any grants in progress going to things we don’t approve of,” Ebell said.

For the moment, a host of government portals at EPA, NASA, the National Oceanic and Atmospheric Administration and elsewhere continue to provide the public with enormous streams of climate information. Visit climate.nasa.gov, climate.gov and globalchange.gov to get the idea.

And there’s been at least one recent reason for optimism at NASA, several agency scientists said. Among Trump’s appointments for the NASA transition and possibly beyond is Erik Noble as White House senior adviser on the space agency.

On one level, he might seem a conventional political appointment. Noble was, after all, a member of the data-analysis team for the Trump campaign that may have provided the critical guidance that won the election.

But he’s also a published climate scientist, and worked at the Goddard Institute for Space studies, a frequent target of those opposing action on climate change, while completing his doctorate.

Meanwhile, communications staff at various NASA science divisions learned yesterday in a weekly video conference with headquarters that the new “strategic communications adviser” at the agency’s headquarters will be Jen Rae Wang. Wang helped lead the Trump presidential campaign in Nebraska and last month had been announced as a deputy chief of staff to newly elected U.S. Rep. Don Bacon, a Nebraska Republican.