The statistics released yesterday from Covered California could bode well for health insurance exchanges that have their act together.

Although the California exchange enrolled 109,000 in October and November combined, the tally from the first seven days in December — 49,708 — is nearly three times the pace from a month earlier. Even more people completed applications, the step prior to choosing a plan. 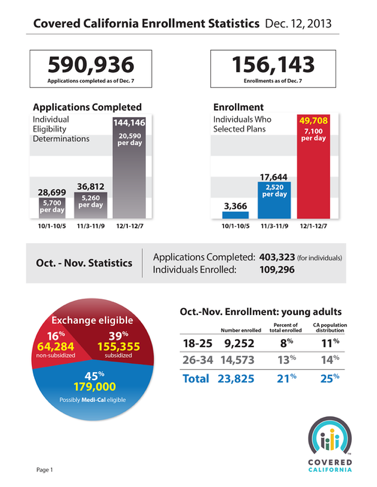 “This has been a phenomenal experience as Californians have expressed in words and action their desire for affordable and quality health insurance coverage,” Covered California executive director Peter V. Lee said in a news release. “Enrollments and applications are surging, and we at Covered California — and our partners — are stepping up our game to meet the demand.”

I talked to Lee last month after California outpaced enrollments on HealthCare.gov, the federal marketplace for 36 states, during the month of October. (To be sure, the current sign-ups are still well below the exchange’s goals for 2014.)

The news also has been positive out of New York. The New York State of Health exchange announced that, as of Monday, more than 69,500 people had signed up for private health plans through the state’s marketplace, according to Capital New York. That’s a big increase from a week earlier. As of Nov. 30, 45,000 people had selected a plan through the state’s exchange, the U.S. Department of Health and Human Services reported this week in its state-by-state tally.

Donna Frescatore, executive director of New York State of Health, said in a statement: “We are very pleased to see these results, which show that tens of thousands of individuals and across the state are turning to nystateofhealth.ny.gov to access low-cost health insurance.”

Even HealthCare.gov, the federal marketplace handling enrollment for 36 states, is seeing a surge. In three days last week, after the beleaguered website was fixed, enrollment topped 56,000, The Washington Post reported.

The late success creates both promise and pitfalls. As the Dec. 23 deadline draws closer for plans that begin on Jan. 1, even more consumers are expected to sign up. These enrollments have to be transferred from the exchanges to the insurance companies, a process fraught with problems.

And consumers have to pay their first month’s premiums before their coverage takes effect. Errors or delays can derail coverage, at least for January.

(The 2014 open enrollment season ends March 31 and those without coverage will have to pay a penalty.)

HHS said Thursday that it is encouraging health insurers to be flexible and consider extending the payment deadline for coverage that begins Jan. 1. For its part, America’s Health Insurance Plans, a trade group, was skeptical about the Obama administration’s attempt to keep changing deadlines. Previously, federal officials extended the deadline to choose a plan from Dec. 15 to Dec. 23.

“With only weeks to go before coverage begins, continued changes to the rules and guidance could exacerbate the challenges associated with helping consumers through the enrollment process,” said Karen Ignagni, the group’s CEO, in a statement. “Health plans will continue to do everything they can to protect consumers from potential coverage disruptions caused by the ongoing technical problems with HealthCare.gov.”