This is one of our editors' picks from our ongoing round-up of Investigations Elsewhere. 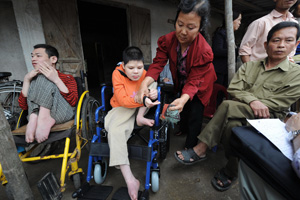 The Chicago Tribune revisits the decades-old controversy over Agent Orange today, kicking off a five-part series with a story about the federal government's "record of neglect" since recognizing the health hazard 30 years ago.

The military used Agent Orange and other herbicides in Vietnam to wipe out the thick vegetation sheltering the enemy. Since then, hundreds of studies have linked Agent Orange to a range of health problems including soft tissue sarcoma and non-Hodgkin's lymphoma. The legacy reverberates in illnesses found in the children of Vietnam veterans.

The fallout has been enormously costly for the U.S.:

Service-related disability payments to Vietnam veterans have surged 60 percent since 2003, reaching $13.7 billion last year, and now account for more than half of such payments the U.S. Department of Veterans Affairs provides to veterans of all wars.

Yet, according to the Tribune, the government is still fumbling its response to the problem:

U.S. veterans seeking compensation for their illnesses face delays and a maddening bureaucracy. Adding to their frustration, the federal government never has gotten to the bottom of Agent Orange's full impact, failing to follow through on requests for large-scale studies on how defoliants may have affected veterans' health.

The VA has long said that it could not study the herbicides' health impact because it had no way of measuring exposure. But in September it announced a broad, three-year study on Vietnam veterans' health, although it will not look specifically at herbicides like Agent Orange, according to the Tribune.

The story includes an impressive map documenting the government's spraying missions through the war. The total: 20 million gallons.

Note: One of the developers of the interactive elements on the Tribune project, Brian Boyer, is a former intern at ProPublica.