Last week Uber revealed another way the ridesharing service is revolutionizing travel: Cities that use Uber see a reduction in drunk driving accidents among young people, a company report showed.

"When empowered with more transportation options like Uber, people are making better choices that save lives," the company declared.

David Plouffe – President Obama's former campaign manager who is now filling the same role for Uber – emailed millions of users to share the astounding news. "Since we launched uberX in California, drunk-driving crashes decreased by 60 per month for drivers under 30," Plouffe wrote. "That's 1,800 crashes likely prevented over the past 2 ½ years."

What is Uber's evidence that they "likely prevented" so many crashes?

Indeed, Mothers Against Drunk Driving, which co-authored the report, cautioned us against connecting the rise of Uber to a drop in drunk driving. "Nobody is saying that there is a causation relationship here, this is a correlation relationship. Purely correlational," said Amy George, senior vice president of marketing and communications for MADD. (MADD took a less cautious stance in a  press release last week: New Report from MADD, Uber Reveals Ridesharing Services Important Innovation to Reduce Drunk Driving.)

Uber's report has two key graphics: The first shows alcohol-involved crashes in California markets where Uber operates. The second shows the same, but in cities where there is no Uber service. Each graph compares accidents between under-30 and 30-and-over drivers. The charts actually show, in general, a downward trend of drunk driving accidents in both Uber and non-Uber markets.

But Uber and Plouffe are hanging their assertion on another facet of the analysis: drunk driving crashes for those under 30 have dropped more in cities that have Uber versus those that don't.

Darker line is 30 and over, lighter line is under 30. (Source: Report co-authored by Uber, MADD)

California: Alcohol-Related Crashes in Markets Where Uber Does Not Operate 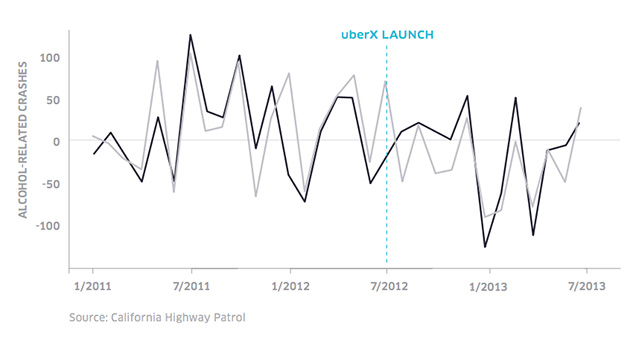 Darker line is 30 and over, lighter line is under 30. (Source: Report co-authored by Uber, MADD)

"We believe there is a direct relationship between the presence of uberX (Uber's lowest-cost option) in a city and the amount of drunk driving crashes involving younger populations," the report says.

That could be. But we don't really know, and neither does Uber. 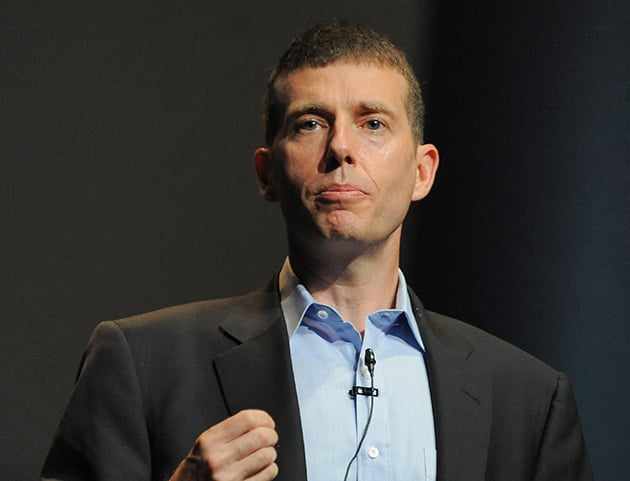 "Since we launched uberX in California, drunk-driving crashes decreased by 60 per month for drivers under 30," David Plouffe, shown in 2009, emailed millions of users last week. (Francois Durand/Getty Images)

Uber does not provide evidence in its report that Uber users and those under 30 are the same population. A methodology shared with us by Uber asserts that their users are generally younger and more technologically savvy. MADD's George said they sent the data analysis to an outside research group for extra vetting. She declined to name the group because they were not formally part of the report.

Michael Amodeo, an Uber spokesperson, sent us a statement in response to questions about the analysis:

"We believe the results of the study are an encouraging step in the right direction and provide evidence that ridesharing services like Uber are making a meaningful and positive impact on mindsets and the rate of drunk driving. We attempt to deal with other factors in our study by breaking out the under 30 and over 30 groups, and we're comparing them against each other."

Uber's report credits an analysis by Nate Good, who is chief technology officer for an online ticketing company as well as an amateur statistician and self-described ridesharing proponent. Uber's report reads: "Inspired by Nate Good's analysis—which demonstrated a clear downward trend in alcohol-related crashes in Pennsylvania's youngest cohort once ridesharing was available—we decided to replicate that study in California at large using data procured from the State."

However, Good's study had nothing to do with "alcohol-related crashes." Good analyzed DUI arrests. "That was a poor choice of words on Uber's part," Good told us.

Good was careful to note various caveats of his analysis. No 1 on his list: "Correlation does not equate to causation." No. 2: "I am a computer science professional and a data science enthusiast, but by no means a statistician."

Good said he attempted to analyze alcohol-involved crash data but could not find a reliable data source.

We've also reached out to Plouffe, but haven't heard back yet.