When the head of the University of Mississippi condemned fraternity members last week for posing with guns in front of a bullet-riddled memorial to the slain 14-year-old civil rights icon Emmett Till, he defended the campus investigation and the decision not to discipline the students.

He said Ole Miss had been unable to identify “all” the students involved when it received the complaint “or that they were all affiliated with the same fraternity.”

But the statement was misleading.

A bias complaint filed in March, and obtained by the Mississippi Center for Investigative Reporting and ProPublica, clearly identifies two of the men by name and their membership in Kappa Alpha Order.

The photo “shows three boys, at least two of whom are members of KA at Ole Miss,” the complaint reads.

On Monday, following questions from the news organizations about the discrepancy, interim Chancellor Larry Sparks acknowledged that his administration had mishandled the investigation and said that he has launched an internal review into a “breakdown in communications” that prevented a full examination of the incident by university administrators.

“Our ongoing review has updated our understanding of some key facts in this process,” Sparks wrote in response to questions from the Mississippi Center for Investigative Reporting and ProPublica.

The bias incident investigation “process has not concluded,” he wrote. “We will proceed accordingly to make all appropriate referrals and assessments.”

The complaint filed in March included a copy of a photo that student Ben LeClere posted on March 1 to his private Instagram account. The image showed LeClere and two fraternity brothers in front of a roadside plaque commemorating the site where Till’s body was recovered from the Tallahatchie River. The 14-year-old black youth was tortured and killed in August 1955. An all-white, all-male jury acquitted two white men charged with Till’s murder. His death helped launch the modern civil rights movement.

LeClere was clutching a shotgun in the photo, and fraternity brother John Lowe was squatting beneath the bullet-pocked sign. A third fraternity member stands on the other side of the sign with an AR-15 semi-automatic rifle. (The complaint misidentified Lowe as holding the rifle when he was in fact squatting.)

It appears that man is Howell Logan, a Kappa Alpha member who was identified on Twitter and Instagram by former high school classmates from the private Deerfield-Windsor School in Albany, Georgia. Logan was a star athlete there.

Late last week, three social media accounts appearing to belong to Logan were deleted, around the same time as social media accounts bearing the names of LeClere and Lowe were deleted. The image in the Instagram photo is strikingly similar to photos shared by Logan’s former classmates. Logan’s height also appears to match the height of the man seen in the photograph.

Logan did not return requests for comment, and neither did LeClere and Lowe. It is not clear whether the students shot the memorial or were merely posing in front of it.

The Kappa Alpha chapter at Ole Miss suspended the three men in the photo last week after being asked for comment by the Mississippi Center for Investigative Reporting and ProPublica.

In his initial statement on Friday, Sparks called the photo “offensive.” The university, he said, had turned over the image to the FBI, which concluded no specific crime had occurred.

She questioned why Ole Miss officials deferred their own inquiry while awaiting an FBI decision. “Pursuing the possibility of an investigation did not prevent the university from engaging in long-established protocols for how to respond to incidents like this,” she said. 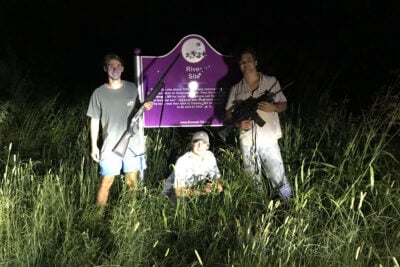 We Found Photos of Ole Miss Students Posing With Guns in Front of a Shot-Up Emmett Till Memorial. Now They Face a Possible Civil Rights Investigation.

Three students were suspended from their fraternity house, Kappa Alpha, after we shared an Instagram photo one of the men posted that was taken in front of a sign commemorating the murder of the 14-year-old black youth in 1955.

On Monday, Sparks acknowledged that Ole Miss officials had confirmed the status of the two named students shortly after the complaint was filed. LeClere is currently an enrolled junior and majoring in managerial finance. Lowe is not currently enrolled.

Sparks said the Bias Incident Response Team, which received the complaint, referred the matter to the University Police Department, which contacted the FBI.

The university’s Office of Conflict Resolution and Student Conduct and its office for Fraternal Leadership and Learning, both of which would typically have a role in examining such a complaint, decided to defer action until the FBI had made a decision.

But those campus offices were never told of the FBI’s determination because of a “lapse in communication,” Sparks wrote on Monday. He said the offices would now continue their own inquiry into the photo.

“All staff members who were involved in this process demonstrated an ongoing commitment to deal with this matter seriously, and the university is committed to ensuring that this process will function as intended,” Sparks wrote.

Ole Miss officials didn’t respond to questions about whether LeClere was ever contacted about the photo, which remained on Instagram until July 23, when the Mississippi Center for Investigative Reporting and ProPublica began asking questions about it.

Ole Miss officials also didn’t respond to questions about whether they ever contacted Kappa Alpha Order officials about the picture.

Taylor Anderson, president of Kappa Alpha Order at Ole Miss, said the first time he saw the photo was July 23. In less than 24 hours, Kappa Alpha suspended all three members in the photo.

Anderson wrote in an email that if he had seen the picture back in March when Ole Miss received the complaint, the fraternity would have “absolutely … taken the same immediate action” to suspend the members.

But at least some members of the Kappa Alpha chapter were aware of the photo. Of the 247 people who initially liked the photo on Instagram, at least 16 of them identified themselves in their profiles as Kappa Alpha members at Ole Miss.

Asked about this, Jesse S. Lyons, assistant executive director for advancement for the national Kappa Alpha Order, responded that the fraternity would look into the matter. He pointed out that the Till photograph was among a series of images in the post, and that some may have liked another photo, which appeared first, without looking beyond it. The Ole Miss chapter of Kappa Alpha has 280 members.

One of those who liked the photo said in an Instagram message, “I just liked the picture because it was a birthday post. Had 0 clue who [Emmett Till] even was until all of this happened.”

Ole Miss has struggled to move beyond its past in the decades since the 1962 admission of James Meredith, the first known black student to attend.

In 1988, the first black fraternity house to integrate the campus burned down. The university rallied and raised money to rebuild it.

In 2014, three students from the Sigma Phi Epsilon fraternity house placed a noose around the neck of a statue on campus of Meredith. They also placed a Georgia flag of the past that contains the Confederate battle emblem.

Kappa Alpha has a history of racial controversy, including an incident in which students wore blackface at a Kappa Alpha-sponsored Halloween party at the University of Virginia in 2002. Its website honors Confederate Gen. Robert E. Lee as its “spiritual founder.”

The photograph of the trio posing before the Till sign has renewed discussions of race and racism in Mississippi, even prompting the governor to weigh in.

On Saturday, Gov. Phil Bryant, a Republican, released a statement on Twitter: “I am deeply saddened by the choice made by the three students to pose in such a thoughtless and disrespectful way at the Emmett Till historical marker. Mississippi has made significant strides toward racial reconciliation, and such despicable actions are not representative of the progress we have made.”

The Black Student Union and the Associated Student Body have also weighed in, asking Ole Miss to turn the university’s creed, which urges “respect for the dignity of each person,” into a student requirement.

To combat the repeated attacks on the sign, the Emmett Till Memorial Commission removed the shot-up sign and has a new one that is reportedly bulletproof, said Executive Director Patrick Weems.

And the Emmett Till Memory Project has designed a website and smartphone app that lets people visit all the significant places connected to the Till story.

Dave Tell, author of the book “Remembering Emmett Till,” said the team hopes to unveil that app in time for the anniversary of Till’s death, Aug. 28.

Thalia Beaty, Benjamin Hardy and Claire Perlman of ProPublica contributed to this report.