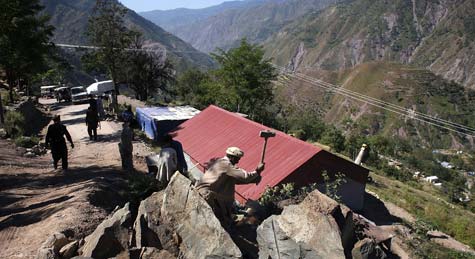 As the United States prepares to drastically increase civilian aid in Pakistan, the agency in charge has asked for help training the local organizations that will spend that aid money, saying those organizations "do not meet the minimum standards for managing" U.S. government funds.

Last fall, President Obama signed a bill committing $7.5 billion in nonmilitary aid to Pakistan over five years. In December, we reported on the administration’s plan (PDF) to channel much of that money away from American contractors and nongovernmental organizations, directing it instead toward Pakistani organizations. Administration officials defended their approach, saying it would help build stronger Pakistani institutions. But the plan drew warnings from development experts, who questioned whether Pakistan’s history of corruption and lax accounting standards would increase the risk to U.S. taxpayers’ money.

This week, the U.S. Agency for International Development, which oversees the funding, took a stab at answering that question. On Monday, the agency posted a notice (.doc) on Grants.gov, the main Web site for government grants, asking for comments and suggestions on how to train Pakistani organizations, including government ministries, contractors and nongovernmental organizations.

"USAID’s past experience with local institutions indicates that many of these local organizations are faced with institutional capacity issues and overall weaknesses in their internal controls, financial management and absorptive capacity," reads the notice, leading to "a higher degree of risk and ultimately more audit recommendations."

According to the notice, USAID will use the comments it receives to help draft a request for applications for its "Assessment and Strengthening Program," a five-year, $25 million project intended to screen Pakistani organizations and improve the way they operate. The organization that wins the award will be responsible for ensuring that those new policies and procedures are being followed, through what the notice calls "annual compliance validations."

"The ASP will specifically target those local implementing partners which are considered essential to meeting USAID/Pakistan’s goals and objectives, but do not meet minimum standards for managing USG funds," says the notice. "The ASP will allow for the provision of the technical assistance required to build their institutional capacity up to USAID standards."

Charles Tiefer, a professor of government contracting at the University of Baltimore Law School, and a member of the Commission on Wartime Contracting in Iraq and Afghanistan that reports to Congress, said that USAID’s approach in Pakistan is "understandable, but risky."

"AID is on the horns of a dilemma," he said. "They don’t have enough local NGOs to help with the large amount of aid that Congress wants Pakistan to have. But by using local NGOs that don’t keep the kind of reliable bookkeeping that AID and its inspector general require, they risk from time to time seeing some of their grant money evaporate without much sign it’s doing what it’s intended to do."

Jacques Gansler, a professor at the University of Maryland who was undersecretary of defense for acquisition, technology and logistics under President Clinton, praised USAID’s approach, which he called "on-the-job training" for Pakistani organizations. But he said the success of the program would depend on the willingness of Pakistanis to make their institutions more transparent.

"The challenge is whether the people who are in leadership positions in Pakistan are the kind that are looking for money in their pocket, or money for their country," Gansler said. "If it’s clearly for the building up of the nation, it’ll work. If it’s trying to say, ‘I’ll take my 10 percent off the top first,’ that’s something that AID has to be very careful of."