Today we’re debuting a documentary with Frontline that chronicles some of our reporting on hate groups over the past year.

Reporters A.C. Thompson and Ali Winston have been investigating the rise of white supremacist groups in the U.S. after the violent August 2017 Unite the Right rally in Charlottesville. Their work is part of a project at ProPublica called Documenting Hate.

The project, which started shortly after Election Day in 2016, has an ambitious goal: collect as much data as we can to make up for the wholly inadequate records collected by the government.

We’ve been asking people to share their stories with us. We’ve received more than 5,000 responses to date. Together with more than 150 partner newsrooms around the country, we’ve been working to verify these reports and to tell these stories.

If you’ve been a victim or or witness to a hate crime, we want to hear your story.

In this, the second year of the project, we continue to receive tips from all over the United States, and from cities big and small. Victims and witnesses write to tell us about incidents that have happened as recently as earlier in the day and as long as decades ago. They tell us deeply personal experiences of threats and harassment, belittlement and humiliation — and sometimes physical violence.

There are stories like Melissa Johnson’s. The day after the 2016 election, she was leaving a Trader Joe’s in San Diego when a man slowed down his car next to her, she told Reveal, the investigative radio program. The man leaned out of the window and yelled: “Fuck you, nigger, go back to Africa. The slave ship is loading up … Trump!”

Reveal reviewed hundreds of our tips in which the president’s name was mentioned during an act of hate, verifying more than 150 incidents that it featured in a story and radio segment.

Sometimes tipsters send us local news clips. That’s how we learned about the murder of Jimmy Smith-Kramer, a 20-year-old Native man in rural Washington state. One of the reporters on our team, Rahima Nasa, investigated the case and and found out why police hadn’t charged the killer with a hate crime. In the end, the killer was sentenced to less than eight years in prison, with no hate-crime charge.

Occasionally, victims manage to record hate incidents as they happen. In Texas this spring, college student Ali Alghamdi was cut off by an irate driver, who got out of his car to berate him. “This is not Pakistan, Afghanistan or Kuwait. We have rules in this fucking country,” the man said to Alghamdi. “You sound like a fucking Arab.” The student, who shared his experience with HuffPost, filmed the encounter and called police, who said they’d pursue disorderly conduct charges. After the story went viral, The Caller-Times in Corpus Christi reported that the mayor of the college town where the incident took place wrote a letter denouncing the suspect’s behavior.

We often hear from tipsters about vandalism and how it affects communities. In one small Colorado town, someone hung a noose around the neck of an African statue, the Denver Post reported.

“Everybody was embarrassed by the situation because we don’t see our community as being racist,” witness Angie Mays told the paper. “So to have a hate crime in a public space is really hurtful.”

Where to Watch “Documenting Hate: Charlottesville”

Tune into the premiere on PBS on Aug. 7 at 10 p.m. Eastern, 9 p.m. Central and online at pbs.org/frontline.

The Documenting Hate project receives hundreds of tips in Spanish through Univision, which has written extensively about hate against Latinos and immigrants. Earlier this year, Univision wrote about dozens of hate incidents at Walmarts and other superstores, affecting customers and workers alike.

In one case, a 19-year-old Walmart employee in Santa Fe, New Mexico, was verbally abused by a man after asking to see his beer receipt. “I have money. I have a job. Do you even have a visa? You should go back to your country. Are you even from here? You’re stealing our jobs,” she recounted to Univision. “He screamed so loud I have never been more scared in my life about just doing a task for a job.”

Univision heard from other Latinos who’d been targeted in the workplace. Amílcar Bermúdez, an undocumented Guatemalan immigrant working for a paving company in Florida, told Univision a co-worker grew angry with him for having more experience and getting paid slightly more. “How is it possible if you’re an immigrant?” he recalled the man saying. “He said Donald Trump was going to deport me in a box to my country and that he was going to call immigration on me.” Then the man assaulted him, sending Bermúdez to the hospital. (The man was later convicted and had to pay for Bermúdez’s medical expenses, Univision reported.)

Latinos have also sent in tips about getting harassed for speaking Spanish in public. The Los Angeles Times spoke to Natalia Meneses, who said she was targeted in Georgia after her three-year-old uttered two words of Spanish. “You need to teach this kid to speak English, because this is America and kids need to learn English,” Meneses said she was told by another woman. “If not, you need to get out of this country.” 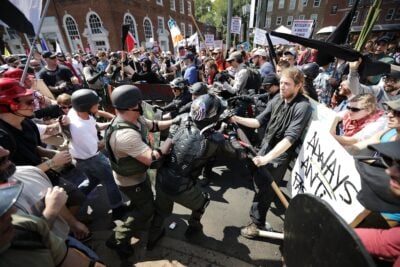 While some undocumented immigrants are fearful of going public, many have submitted tips to the project through Univision. This month, Univision reported on immigrants who’d been detained while visiting the beach in Florida. They believe they were racially profiled by a state Fish and Wildlife official who called ICE on them; the state agency says the officer was just doing her job.

We also compare the stories we receive to official police records. After we noticed that we received hundreds of tips about incidents targeting people for being gay, we investigated why so many police departments were marking hate crimes as anti-heterosexual. It turns out they were doing so erroneously.

In May, we even worked with one of our partners to bring the project to the stage, working with Los Angeles radio station KPCC for an event that brought together journalists, victims, experts and activists.

In the months ahead, we have more stories coming from ProPublica and our partners. Stay tuned.

Have you been the victim or witness of a hate incident? Tell us your story.