The Department of Veterans Affairs’ decision earlier this year to ban all voter registration drives at VA facilities has received growing criticism. Now a former government official has told us the VA’s contention that such drives might break the law is "silly." 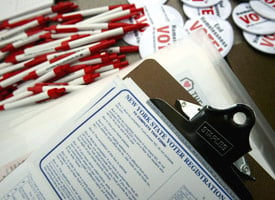 The VA cited potential Hatch Act violations in its reasoning for the May directive that banned all outside groups and individuals from registering voters at VA facilities. The Hatch Act prohibits federal employees from partaking in partisan political activity while on the job.

"I’ve never heard of anyone being prosecuted for approving a nonpartisan voter drive," said Elaine Kaplan, who formerly led the the Office of Special Counsel, the office that investigates potential Hatch Act violations.

Secretary of Veterans Affairs James Peake has admitted the Hatch Act allows nonpartisan voter registration drives to be held at federal facilities by federal employees, but said the difficulty of deciphering which groups are nonpartisan and potential disruptions to medical care is the reason for the ban. In a letter (PDF) to Sens. Daniel Akaka (D-HI), Diane Feinstein (D-CA) and John Kerry (D-MA) on July 15, Peake wrote in response to their request to lift the ban that "the agency is not in a position to examine the agenda, history, and motivations of every organization that may wish to conduct voter registration drives in our facilities."

"They are coming up with a prophylactic rule, meaning I’m going to sweep in legitimate activity, so I avoid violating the law," Kaplan told ProPublica. "I just think it’s silly."

The VA did not respond to questions for this story.

Office of Special Counsel Chief of Staff Jim Mitchell told us the VA has not asked for an advisory opinion as to whether voter registration activities might cause possible Hatch Act violations. The OSC has offered opinions that approved of traditional nonpartisan groups registering voters in federal facilities, but has prohibited using federal employees in such drives.

Several nonpartisan voting rights groups have called for an end to the ban.

The VA could also soon face a lawsuit from Connecticut Secretary of State Susan Bysiewicz. After she learned the VA banned all individuals and groups from registering voters at VA facilities, she went to the VA hospital in West Haven, Conn. on June 30, held a press conference on the ban, and tried to register voters. She registered a dozen veterans outside the hospital, including a 92-year-old World War II veteran, and then tried to enter the hospital, but a VA official stopped her. She later formed a bipartisan group of secretaries of state to oppose the ban (PDF). When the VA reconfirmed their support for the restrictions, Bysiewicz responded that if the ban isn’t lifted by August 1, she will take action (PDF) that might include a lawsuit.

“They’ve given us a number of reasons,” said Bysiewicz’s spokesman Adam Joseph. “First they said the Hatch Act and then in a time of war it would cause disruption to patient care – we’re talking about a table in a lobby and handing out voter registration cards.”