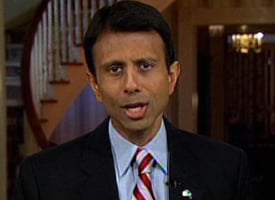 Viewers who tuned in to Louisiana Gov. Bobby Jindal's response to President Obama's pseudo-State of the Union on Tuesday night might be wondering about what volcanoes and a levitating train to Disneyland have to do with the economic stimulus package.

The Republican governor, who some say could challenge President Obama in 2012, said the plan is "larded with wasteful spending."

"It includes $300 million to buy new cars for the government, $8 billion for high-speed rail projects such as a magnetic levitation train from Las Vegas to Disneyland and $140 million for something called volcano monitoring. Instead of monitoring volcanoes, what Congress should be monitoring is the eruption of spending in Washington, D.C."

So what does the bill actually say?

The $300 million would go to buy energy-efficient government vehicles, such as hybrid and electric cars. During the campaign, President Obama pledged to transform the federal fleet into an example of environmental conscience.

The $8 billion is for high-speed rail corridors that would connect far-flung cities. Suspicion has swirled around this provision after funding was dramatically increased from the original House and Senate bills during final negotiations. Republicans have targeted Sen. Harry Reid, R-Nev., who was in those negotiations and has advocated in the past for a high-speed rail between Los Angeles and Las Vegas. The train isn't in the American Recovery and Reinvestment Act, but it could be one of several projects seeking a piece of the pie. Even so $8 billion isn't enough to pay for even a single bullet train, according to The New York Times. Here's their map of designated high-speed rail corridors.

The $140 million goes to the U.S. Geological Survey for a series of construction and repair projects that includes "stream gages and seismic and volcano monitoring systems, national map activities and other critical deferred maintenance," according to the legislation.

FactCheck.org and Politifact break it down in more detail.