Earlier this week, we published a story with the Chicago Sun-Times that identifies a right-leaning public policy organization as the primary source of money behind Project Six, a Chicago-based nonprofit that investigates government waste, fraud and abuse.

Project Six is led by former Chicago City Council inspector general Faisal Khan, who says the group is independent and nonpartisan — even though 98 percent of the funds it received during its first year came from the Illinois Policy Institute. The institute’s crusades for small government, lower taxes and reduced labor-union power are highly influential within the state Republican Party.

Determining who funded Project Six took several steps, as well as some luck.

Under federal and state laws, nonprofits are required to share most of their annual tax returns with any member of the public who wants to see them. These records include annual spending, income, top-paid officers, and lists of organizations given grants or other financial assistance.

But there’s a chunk of information about nonprofits the public doesn’t see. As the IRS puts it: “A tax-exempt organization is generally not required to disclose publicly the names or addresses of its contributors.”

In short, if a nonprofit doesn’t choose to reveal where it gets its money, the public may never know who’s funding it or what agendas they could have ...

... Unless someone notices a grant or gift to the organization listed on another group’s tax return.

That’s how we pinned down the Illinois Policy Institute’s funding for Project Six.

We obtained the institute’s tax return for 2016, the most recent year available. You can see it here. The list of grants it made to other organizations is on page 32, at the bottom. It shows the institute reported giving $623,789 to Project Six:

To find out how that money fit into the overall budget for Project Six, we then took a look at that group’s 2016 tax return, which you can see here.

On line 12 of the first page, Project Six reports that its total revenues for that year were $634,341:

That’s how we determined that 98 percent of its income for 2016 came from the Illinois Policy Institute.

In our Nonprofit Explorer, you can search IRS data released since 2013 and access over 9.6 million tax documents filed by nonprofits around the country as far back as 2001. We’ve also made available summaries of 3 million tax returns, which include such financial details as an organization’s executive compensation, revenue and expenses.

So if you’re curious to see more tax documents from, say, the Illinois Policy Institute, they’re here going back to 2002. (For the record, we at ProPublica have been voluntarily publishing our own financial records on our website since 2008, when we launched.)

We encourage you to search around in the Nonprofit Explorer. If you see something interesting and you think we should look into it, we’re all ears. Email us: [email protected] 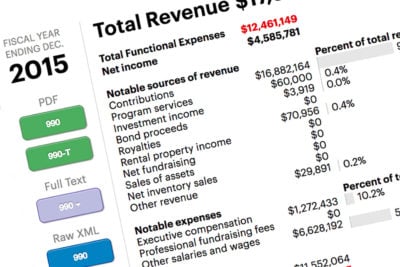