Update, Sept. 21, 2012: Secretary of State Hillary Clinton has decided to remove the MEK from the U.S. government list of foreign terrorist organizations, CNN reports, marking a victory for the group and the dozens of former officials who have been paid to speak at events urging the policy shift. Clinton was up against a court-imposed October 1 deadline to make a decision about whether the MEK should remain on the list. The decision has not been officially announced, but an unnamed U.S. official told CNN: "We don't love these people but the secretary's decision is merited based on the record of facts that we have."

On a Saturday afternoon last February, journalist Carl Bernstein got up on stage at the grand ballroom of the Waldorf Astoria in Manhattan and delivered a speech questioning the listing of an obscure Iranian group called the Mujahadin-e Khalq (MEK) on the U.S. government list of officially designated foreign terrorist organizations.

The speech, before a crowd an organizer put at 1,500, made Bernstein one of the few journalists who has appeared at events in a years-long campaign by MEK supporters to free the group from the official terrorist label and the legal sanctions that come with it. He told ProPublica that he was paid $12,000 for the appearance but that, “I was not there as an advocate.”

Bernstein told the crowd that, "I come here as an advocate of the best obtainable version of the truth" and as "someone who believes in basic human rights and their inalienable status." He also challenged the State Department, saying that if the agency “has evidence that the MEK is a terrorist organization, have a show-cause hearing in court, let them prove it.”

Bernstein's speech, reprinted on the website of another pro-MEK group under the title "The Kafkaesque Nature of Things," compared the presence of the MEK on the terrorist list to his parents' experience belonging to a group that was on a U.S. government list of subversive organizations during the McCarthy era.

“So I know, like you, what it means to be designated a certain way and your cause and your purpose misunderstood, twisted, and turned into something that it is not," he said. "When, in fact, the evil, the terrorism, the real terrorism, is in the heart of Tehran, not in this room."

In an interview, Bernstein told ProPublica that the pro-MEK events are “obviously … part of a lobbying campaign” but his speech was “largely about using the designation of terrorist and subversive organizations as a smokescreen for other things.” He said that stories focusing on speakers at pro-MEK events rather than on “the substance of what the controversy is” amounted to “journalistic McCarthyism.”

ProPublica reported in July that syndicated columnist Clarence Page had spoken at a large rally in Paris featuring MEK leader Maryam Rajavi; after we reached out to Page, he said he would reimburse his $20,000 speaker’s fee, and the Chicago Tribune reprimanded him for violating the company ethics code.

Bernstein is a contributing editor at Vanity Fair and writes periodically for Newsweek. A Vanity Fair spokeswoman said the magazine does not have a policy governing outside work of its contributors. A Newsweek spokesman did not respond to a request for comment. Bernstein has not written or spoken about MEK issues apart from the paid appearance at the Waldorf Astoria.

A news release issued after the event by the organizing group, the Global Initiative for Democracy, ran under the headline “Bipartisan Group of U.S. Leaders Calls on State Department to Remove Iranian Dissidents From Terror List" and quoted Bernstein.

“What is news here is [that the failure to delist] is serving the purpose of the Iranian regime.  That is news,” the release said, attributing the statement to “famed Watergate journalist Carl Bernstein."

In the past few years, pro-MEK groups have marshaled considerable financial resources to bring high-profile speakers to an unending stream of rallies and other events in the U.S. and Europe. The pro-MEK campaign has taken on new prominence against the backdrop of the nuclear standoff involving the U.S., Israel and Iran, whose government is a sworn enemy of the MEK.

The group, sometimes described as cult-like by critics, is blamed by the State Department for killing Americans in several attacks in Iran in the 1970s and in attacking Iranian targets through the early 2000s. The MEK now says it has renounced violence and has sued to be removed from the terrorist list. (Bernstein’s speech also referred to the “murderous bureaucracy” that runs Iran, “against whom the MEK has courageously fought.”)

The public push in the U.S. is notable both because it has brought together a large bipartisan group of former top military officials and veteran politicians from both parties and also because of the large sums of money paid for those appearances.

For example, former Pennsylvania Gov. Ed Rendell, a Democrat, received $160,000 for appearing at seven pro-MEK rallies and conferences, his office confirmed to NBC in March. Each event typically involves five to 10 former officials who speak in favor of removing the group from the terrorist list. The typical fee for a speaker at one of the events has been in the $20,000 range, according to news reports. Pro-MEK groups are thought to have spent millions of dollars on the events in recent years.

The Americans speaking at pro-MEK events have generally not included journalists, except for Page and Bernstein. It’s common for prominent journalists to have contracts with speaker bureaus and deliver lectures for pay; Bernstein said, “I speak before all kinds of groups.”

NBC reported in March that firms representing two speakers who appeared alongside Bernstein at the Waldorf Astoria event — former FBI Director Louis Freeh and former Joint Chiefs of Staff Chairman Hugh Shelton — had received subpoenas as part of a Treasury Department inquiry into the source of money for pro-MEK events.

The New York City-based Greater Talent Network, which represents Freeh and reportedly received one of the subpoenas, also represents Bernstein. The agency did not respond to phone calls, but Bernstein told ProPublica he has not been contacted about any legal action and he is not part of the group of pro-MEK speakers that has hired former Solicitor General Seth Waxman to represent them in the matter.

Treasury Department spokesman John Sullivan told ProPublica the agency does not comment on potential investigations. “The MEK is a designated terrorist group; therefore U.S. persons are generally prohibited from engaging in transactions with or providing services to this group,” he said. “The Treasury Department takes sanctions enforcement seriously and routinely investigates potential violations of sanctions laws.”

So who paid for the Waldorf Astoria event?

Bruce McColm, president of the Global Initiative for Democracy, told ProPublica in an email: “Resources for the event were provided by the Iranian-American community in New Jersey, New York, Northern California and Texas.”

McColm added that “[t]he financial arrangements for speakers were handled by the Iranian-American Community. For the legal at heart, there were no funds provided by NCRI/MEK or any other so-called front groups.” NCRI stands for National Council of Resistance of Iran and is recognized by the State Department as an alias for the MEK.

McColm is a former executive director of Freedom House, a pro-democracy group he left in the early 1990s. In recent years, he has worked for the government of Equatorial Guinea and served as a member of the Iran Policy Committee, which advocates putting support for the MEK at the center of U.S. policy toward Iran.

The Global Initiative for Democracy was incorporated in Virginia last November. The Alexandria-based group’s mission statement says it “engages in wide ranging activities nationwide to promote the cause of democracy, human rights, religious tolerance, and cultural and artistic diversity in Iran as well as to ensure the safety and security of political refugees and asylum-seekers.”

But, much like other groups that have organized pro-MEK events, the Global Initiative for Democracy appears to be primarily focused on the MEK. The only other event detailed on the group’s website was a pro-MEK event held at a Washington hotel in May and featuring former ambassador to the United Nations John Bolton and former State Department spokesman P.J. Crowley, among others. News stories featured on the group’s website mostly involve the MEK.

A decision by the Obama administration on the MEK's status is expected soon.

Citing two unnamed American officials, The New York Times reported earlier this month that Secretary of State Hillary Clinton was preparing to possibly redesignate the MEK as a terrorist group, partly because of the failure of the MEK to fully vacate the group’s home in Iraq, called Camp Ashraf, to a new location.

The Iraqi government wants hundreds of MEK members to leave the camp and, ultimately, the country. MEK members first found haven in Iraq in the 1980s during the rule of Saddam Hussein, who armed the group and, according to the State Department, “deployed thousands of MEK fighters in suicidal, waves of attacks against Iranian forces” in the Iran-Iraq war. The group now has an estimated 5,000 to 10,000 members worldwide.

The most recent acts of violence committed by the MEK were “regular mortar attacks and hit-and-run raids against Iranian military and law enforcement personnel” near the Iran-Iraq border in 2001, according to the State Department’s annual terrorism report. French authorities also arrested 160 MEK members in 2003 “at operational bases they believed the MEK was using to coordinate financing and planning for terrorist attacks.”

The State Department’s coordinator for counterterrorism, Ambassador Daniel Benjamin, told reporters in July that the closure of Camp Ashraf would be a key factor informing the agency’s decision because “the history and the use of Ashraf is that of an MEK paramilitary base.”

“It’s where the MEK had its heavy weaponry and from which it carried out a number of military operations during the reign of Saddam Hussein,” he said. “The MEK’s relocation will assist the Secretary in determining whether the organization remains invested in its violent past or is committed to leaving that past behind.”

After several years of legal wrangling, a federal appeals court in June ordered that Clinton must decide on the MEK’s status by Oct. 1. If she fails to take action, the court said it would delist the MEK itself. The order also criticized Clinton for putting off a decision on the MEK, calling the delay “egregious.”

In a petition to the court, the MEK’s lawyers said the group’s leadership decided to end all use of violence in 2001. It also pointed to decisions by Britain and the European Union in 2008 and 2009 to declassify the MEK as a terrorist group. 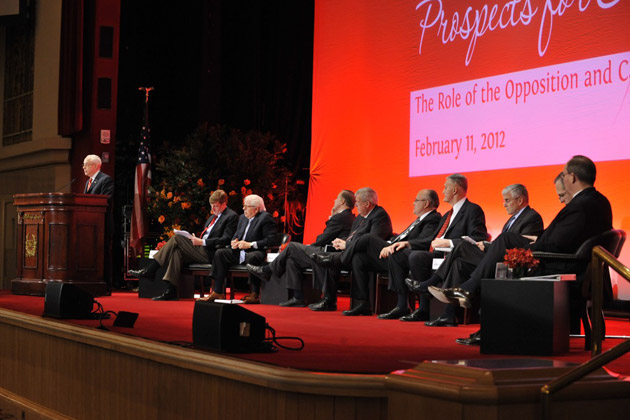