A food relief program championed by President Donald Trump and his daughter Ivanka is relying on some contractors who lack food distribution experience and aren’t licensed to deal in fresh fruits and vegetables.

The contractors on Friday began delivering boxes containing fresh produce to food banks and other nonprofits. Forty-nine out of the 159 contractors picked by the U.S. Department of Agriculture to deliver boxes containing produce don’t have a requisite license from the same agency, according to a search of the USDA’s database using the information released about the contractors.

Some of the contractors are established companies, and many food banks told ProPublica they’re successfully and gratefully receiving shipments. But other contractors have eclectic backgrounds with little track record in food distribution, such as a wedding planner, a caterer and a “brand builder.”

As a result, some food banks are left scrambling for shipments or even callbacks.

“We thought this would work very well, and we really needed the food due to rising unemployment and business closings,” said Pamela Irvine, CEO of Feeding America Southwest Virginia, which serves the poorest and most rural counties in that state. The USDA, she said, “had money and wanted to respond quickly, which they should have because you saw all this produce grounded and milk being dumped. However, they didn’t think about how that product should end up on a table somewhere and didn’t communicate and didn’t have a process in place for bidders to understand.”

The awards to firms for which no licenses could be found amount to $105.3 million, about 15% of the total for produce boxes. The USDA also hired contractors for boxes containing meat and dairy, at a total cost of $1.2 billion for six weeks, with the possibility of extending.

The licenses under the Perishable Agricultural Commodities Act, or PACA, are required for wholesalers, processors, truckers, food-service firms and anyone else who buys or sells more than 2,000 pounds of fresh or frozen fruits and vegetables a day, according to the USDA’s website.

The licenses give vendors a way to resolve payment disputes, and many producers won’t sell to someone who isn’t licensed.

“We don’t do business with people without a PACA license,” said Noah Murguia, the CEO of Murguia Fruit, an orange wholesaler in California. Murguia said he is selling oranges to licensed contractors in the program but doesn’t understand why anyone without a license would be allowed to participate. “To me, it’s a big joke,” he said.

The USDA’s official solicitation and application form don’t mention PACA licenses. An agency spokesman said contractors that don’t already have one will need to get one.

“All proposals were carefully reviewed by a team of contracting and technical experts and contracts made accordingly,” the USDA said in a statement. Companies will have to submit documentation showing deliveries that meet the contract requirements in order to be paid, the agency said.

Trump heralded the program in a tweet on May 9, saying it was implemented at his personal direction.

Ivanka Trump also claimed credit for the initiative, telling USA Today, “I’m not shy about asking people to step up to the plate. The whole country needs to be galvanized in the effort, both to combat this deadly virus, but also to rebuild ... to rebuild our economy as we emerge.”

Speaking at a kick-off event in Maryland last week, Ivanka Trump addressed the awards to small operators, saying, “We want to encourage and support a robust ecosystem of distributors across the nation.”

The White House referred questions to the USDA.

The USDA has a long-established program that buys and distributes food to schools, food banks and households, totaling 3.3 billion pounds and $3.5 billion in 2019. Vendors have to be preapproved and meet precise specifications.

With millions more Americans struggling to buy food as the coronavirus pandemic shutters businesses, USDA officials decided they needed to be more flexible about vendors, products and quantities. “The development of the Farmers to Families Food Box Program represents a completely different way of doing business for us,” Chris Purdy, associate deputy administrator of the USDA’s commodity procurement program, said in an online seminar for applicants. “But these times call for activities outside of our comfort zone.”

When the program was announced, the nonprofit organization Feeding America surveyed its nationwide network of 200 food banks about their needs and worked with seven national distributors on how to implement the program. But none of those distributors received contracts.

“This is just going to blow your mind, it makes no sense,” Irvine said: The only distributor who would ship them produce is sending it cross-country from Washington state.

“We actually think he called us by mistake,” Bob Frampton, Feeding America Southwest Virginia’s chief operations officer, said. “But he’s been great to work with, and we took what we could get because we’re not crazy.” 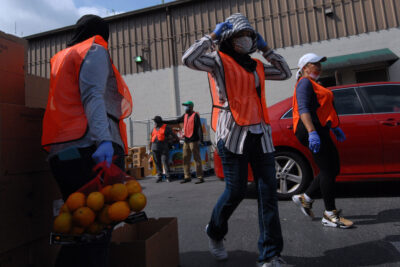 Here’s the dismal equation for food banks: Panic shopping and hoarding have led to supply shortages. Volunteers frightened of the virus have stopped showing up. And a newly jobless population has sent demand soaring.

It’s not clear why some offbeat bids were successful. Federal contracts are heavily regulated, but the labyrinthine rules and procedures sometimes lead to curious outcomes. Businesses owned by minorities or veterans routinely have a leg up. The USDA spokesman said the agency looked for contractors who would “support local and regional farmers.”

The contracts also moved much faster than normal. Companies had only a week to submit bids, and the USDA announced winners just a week later.

Rejected applicants received a form letter saying “some of the most common factors” for losing were missing signatures, according to a copy of the letter obtained by ProPublica.

On a conference call a few days after the contracts were awarded, the USDA told winning bidders that they would need to apply for a PACA license if they didn’t already have one, according to Stephen Martin of Blueprint Foods (identified on the USDA’s announcement as SMH2 Manufacturing, receiving $1 million). “We never knew about a PACA license until they brought it up on a conference call,” Martin, whose company typically delivers prepared foods to grocery stores, said in an interview. “What they’re asking us to do is a fairly simple thing, like what we do anyway, except usually we cook things, so it’s actually easier.”

Still, there are challenges for companies like Martin’s that are working on their first government contract. “We still have to go over how to invoice,” Martin said. “The notion that they built the plane in the air is accurate.”

Some “upstanding companies” that have experience with government contracts were denied “on mistaken grounds,” while winning bidders who don’t have their own warehouses, staff and distributions channels are now looking for subcontractors, according to Tom Stenzel, CEO of the United Fresh Produce Association. “This is not ‘sour grapes’ from those that may not have been awarded; this is a genuine effort to ensure integrity and confidence in the program and that fresh produce actually gets to those in need in an efficient and cost-effective way,” Stenzel said in a letter to USDA leaders.

Three companies that received a total of $6 million in contracts are licensed but are involved in business disputes that were reported to the USDA, according to the agency’s public data. Doug Peterson, the CEO of Aggrigator, which received a contract for $2.6 million, said the company is trying to resolve its five disputes and the complaints never came up in the bidding process. Peterson said the company is producing 4,000 boxes a day and started deliveries on Saturday.

One commenter asked Holtz if his company is in the Produce Blue Book, an industry-standard business directory that rates the creditworthiness of produce suppliers. Without that assurance, the commenter wanted to know if Holtz would be paying cash upfront.

Holtz has since made a website and said he has more than 10,000 orders. In a phone interview, he said he’s already delivered more than 2,200 boxes and has thousands more on the way.

“This isn’t foreign to me,” Holtz said in a phone interview. “I have lots of experience running jobs, this is just a job. I’m a fourth-generation avocado grower, I can talk produce. I know how things get to where they need to be. I know how to run jobs with manpower and people with limits and constraints and financing. It’s going to take everything and everybody I’ve ever known to pull this off, and we’re doing it. We’re off to the races.”

Holtz was surprised to win a contract at the top of the range he applied for, for up to 1 million boxes. “Getting up to seven digits was just kind of cool-looking,” he said. “I put it down and they said all right.”

Holtz doesn’t have a PACA license but said he has applied for one and asked the USDA to expedite it. Holtz’s lack of a license and absence from the Produce Blue Book have made some vendors wary of him, Holtz said, but he said he relies on industry contacts or pays cash. “If you want to know anything about me and my reputation, call up anyone in the California avocado world and they will know my name,” he said.

The USDA awarded a $39.1 million contract, including $6.25 million for produce, to CRE8AD8 LLC (pronounced “Create a Date”), a wedding and event planner in San Antonio. “We had no idea we’d be asked to help on this level,” CEO Gregorio Palomino said in a Facebook post. He does not have a PACA license and said he applied last week.

Palomino told the San Antonio Express-News that the job isn’t that different from his usual work. “We knew that we easily could do this because instead of putting tchotchkes in a bag that is going to go to a conference attendee, this is the same exact thing except it’s just food going into a box,” he told the newspaper.

In a statement, Palomino said he’s in an “initial planning phase,” and his next steps will be hiring up to 100 people and assigning roles and tasks. “This is the largest contract we have won to date,” he said in a statement. “This award will help us all rebound from our losses due to Covid-19.”

A $12.2 million contract went to Travel Well Holdings, a California company with no website. According to the LinkedIn profile of founder Desiree Rodriguez, the company “provides a curated line of travel essentials to surprise and delight travelers with unexpected yet much needed items to improve their personal journey.”

Rodriguez, whose profile describes her as a “Business Development Strategist, Entrepreneur, Brand Builder,” declined to comment.