Some in Congress say the child tax credit isn’t needed because Temporary Assistance for Needy Families is a success. Our reporting found it’s marked by repeated failures. 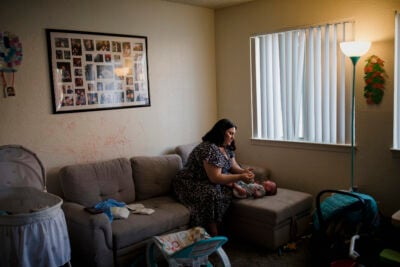 Those in Congress who are blocking President Biden’s proposed child tax credit — a monthly federal stipend for families with children of up to $300 per child — have been making a curious claim of late. They’ve been saying that there is already a highly effective cash assistance program for low-income parents and kids: Temporary Assistance for Needy Families, or TANF.

If the child tax credit were to be provided to these families going forward, “all the requirements that apply to those receiving TANF … would be gone,” said Sen. Chuck Grassley, R-Iowa, in October.

Doing so would “shatter a decades-old consensus” that TANF has successfully transitioned people from welfare to work, Senate Minority Leader Mitch McConnell, R-Ky., added in December.

Here’s the problem: They are simply wrong about the success of TANF. It is a program distinguished by failure.

Last year marked the 25th anniversary of the Clinton-era welfare reform law that created TANF, which inspired me and my colleagues at ProPublica to investigate the current state of cash assistance in this country. Our reporting found that the requirements of TANF, which McConnell, Manchin and the others praised, are more often just plain cruel.

In New Mexico and many other states, for instance, low-income single mothers applying for TANF are forced, in a relic of colonial “bastardy” laws, to first identify the father of their child (and his eye color, license plate number and parents’ addresses), and also to recall under penalty of perjury the exact date when they got pregnant, before they can get a small amount of cash assistance for things like rent, child care and diapers. Many are also made to submit their children to genetic testing.

When a state has all of this information, it can then go after the dads for child support — much of which the government pockets. (ProPublica found that in 2020, nationally, more than $1.7 billion in child support from fathers meant to go to their kids was instead diverted into government coffers, as part of TANF’s design.)

Some states go even further out of their way to avoid spending TANF dollars to help struggling moms, dads and kids. In Arizona, only 6% of families below the poverty line are able to obtain assistance from the program, partly because the state uses more than $150 million a year of its TANF funding to instead pay for child welfare investigations of many of the very same poor parents, as well as the foster care costs of removing their children from them. (More than 60% of Black children in Maricopa County — metro Phoenix — will see their parents investigated by the time they turn 18, according to a recent academic study.)

And across the nation, $5.2 billion in TANF funding that is supposed to be helping provide direct assistance to low-income families is instead sitting entirely unused in states’ bank accounts, with the amount actually increasing during the pandemic even as need soared.

The sheer difficulty of accessing these dollars often leaves applicants casting about for other options. In Utah, for example, so few families seeking TANF are approved or eligible for the aid that many parents I’ve spoken to in my reporting say they feel they have to seek help from the LDS Church instead. There, they are sometimes pressured to get baptized, work for the church or read aloud from the Book of Mormon in order to receive assistance.

But if spending less on helping those in need is actually the point of welfare law, then opponents of the child tax credit in Congress are right to say that TANF works well enough already.

In fact, spending less on parents and children was built into the original structure of TANF. The program’s funding was frozen in 1996 — and has not been increased since to account for inflation or population shifts. That means less and less is available per poor family with every passing year, especially in the rapidly diversifying desert Southwest where I live.

Take Nevada, which since the ’90s has changed demographically more than any other state, due both to immigration and to an influx of tech companies and other young newcomers. Between 1997 and 2015, as the state’s increasing population caused its cost of living to skyrocket, the number of kids living in poverty there more than doubled, from 67,852 to 143,407. The result: Nevada now gets the smallest population-adjusted amount of TANF funding in the nation, at only $63 a year per child. By comparison, neighboring California receives $409.

This is the program that America’s families will be left with if Congress does not pass the child tax credit this year.

Ruby Duncan, who led marches of poor working mothers down the Las Vegas Strip and into its casinos at the height of the city’s Rat Pack glory days, a half-century ago, and who remains a leading advocate for families in the Southwest, put it best. TANF “is not a caring program,” she said. “It’s too late for it to be caring.”